Magenta color in the shadows 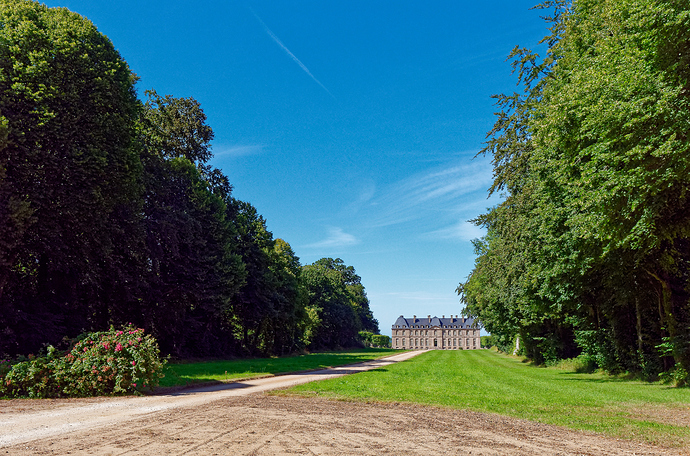 Whatever the reason is for the magenta shadows, they can be fixed, e.g. using a U-point: 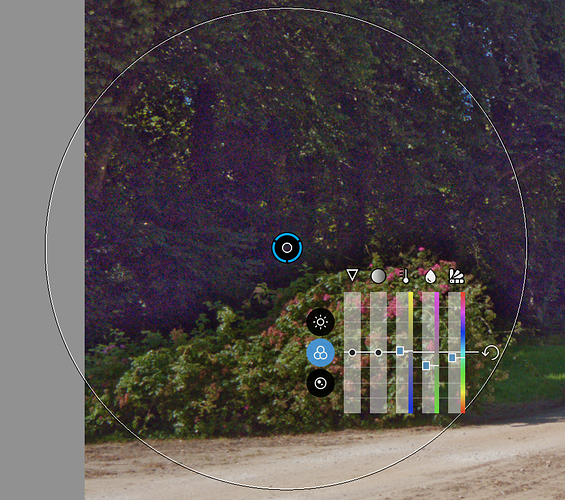 Thanks, i did the same with a brush
However results are not so great i find

I found a comparative video on which PL is adding greenish cast in shadows. Am afraid PL is not the best to recover shadows…

What I see is color noise, maybe you have to (re)adjust the color slider in the noisereduction palette.

Thanks, i did the same with a brush
However results are not so great i find

I found a comparative video on which PL is adding greenish cast in shadows. Am afraid PL is not the best to recover shadows…

I downloaded your raw file and was able to recreate the problem you are seeing in PL 3.3. I also opened it in ON1 Photo Raw 2020 and was unable to reproduce the issue there.

I was not able to recreate the problem on similar images taken with any of my Canon bodies. I have also not noticed it on numerous other images I have edited which were captured with other cameras and brands.

The attached image shows deep shadow detail retrieval from a Canon cr2 raw file taken with my 7D Mark II. I edited the image quick and dirty just as an example of raising shadow detail. There were no additional edits made to this image.

There is clearly an issue with your image and it is not related to the optics module because I tested it with and without it installed. Do you have the same problem with deep shadow recovery with all the images taken by this camera? DXO needs to review your image. 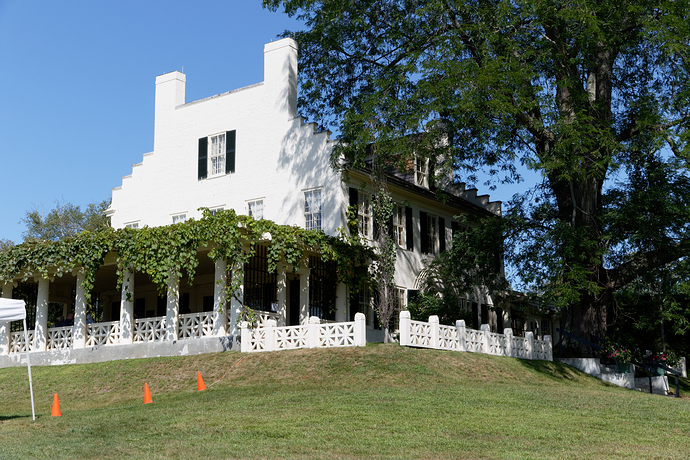 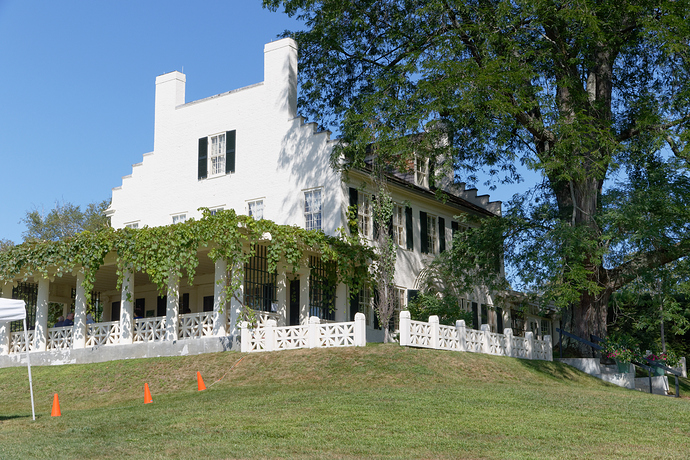 Curious…
I made a test with ACR: same magenta drift in the shadows as with PL.
Another test with ACDSee: the magenta drift seems to have disappeared …
Yet ACDSee is not a major reference in raw development. On the other hand, ACR is usually a reference. Oddly enough, correcting colored noise as much as possible with ACR … increases the magenta!
The particular point of Man’s photo is that it is underexposed, which the histogram shows (Note: this is not a criticism, just an observation).
This is from a photo from a 4x3 sensor, whose iso rise is relatively limited. To see the effect of correcting low light areas, I turned off SmartLighting, Selective Tone, ClearView and Contrast. It is then necessary to increase the exposure of +3. But if we also deactivate the vignetting correction (quite present at the edge of the image), it is rather +3.5 to +4 EV, which means that to have details in the shadows, we are no longer at 200 iso, but around 3200 iso! So with a lot of chroma noise to deal with. And it is perhaps at the level of the processing of the noise that lies the problem: ACDSee which leaves a lot of chromatic noise … leaves more green next to the magenta.
The platypus proposal works well, but I think we need to add Prime noise processing to it (probably looking for the best slider setting).

However the problem also did not occur in ON1 when I opened up the shadows. Regardless that ACR had a similar issue with the magenta shift, .DXO should review this image.

Thanks for the analysis, i use zebra at 105% in my g9, but i think my g9 has a tendency to show zebra too ‘‘early’’. I’ll try to apply a permanent correction.
I have also slightly better result in Photoshop express (free version for android…) to recover the shadows…

it’s also a typical panasonic issue.
there shadows/near blacks have more magenta then it should be.
it’s off balance.
i had the same issue in night shots.
The darker spots got some magenta casting which i couldn’t repair. (G80)
i think your OOC jpegs are fine. (panasonic has long exposure correction which eliminates the redischnes.

DxOPL Staff did some readjusting of the Camera depending data.

Edit test with FastRawViewer and PL: 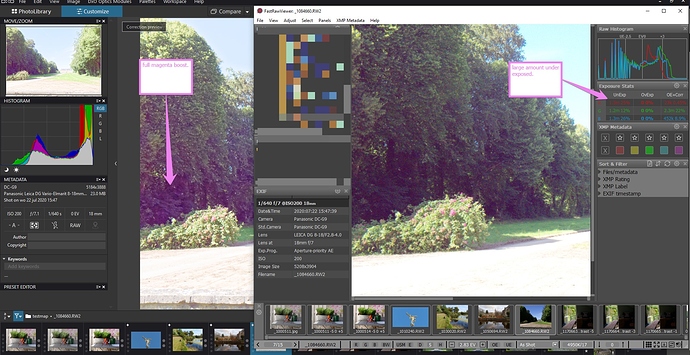 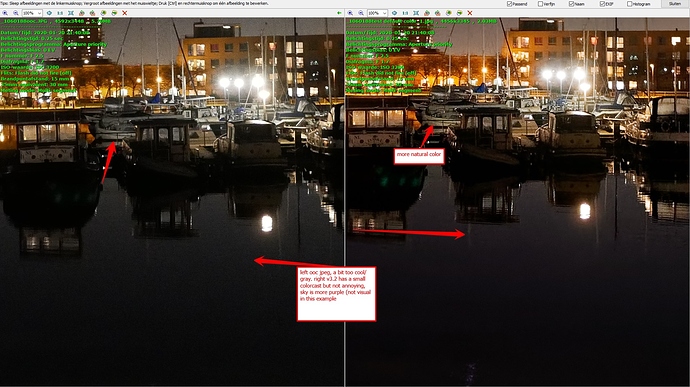 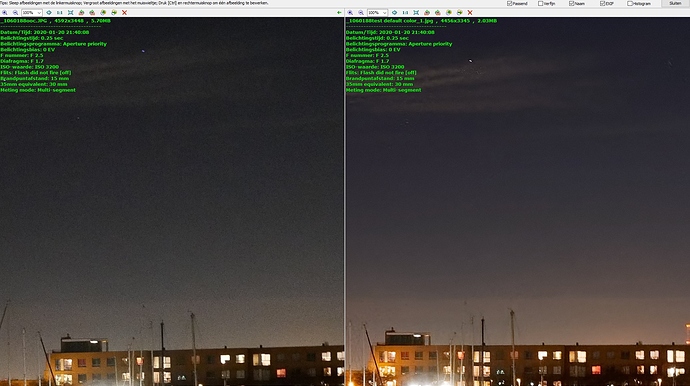 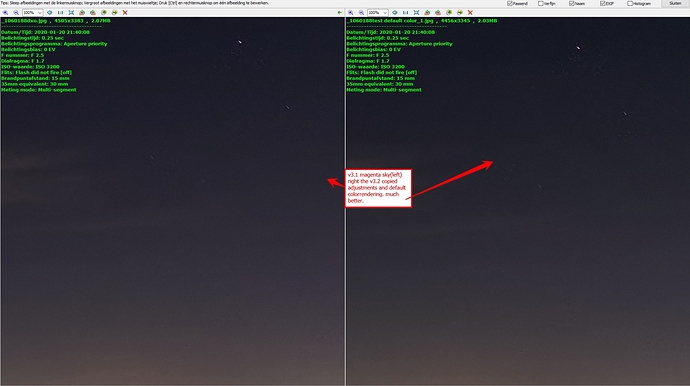 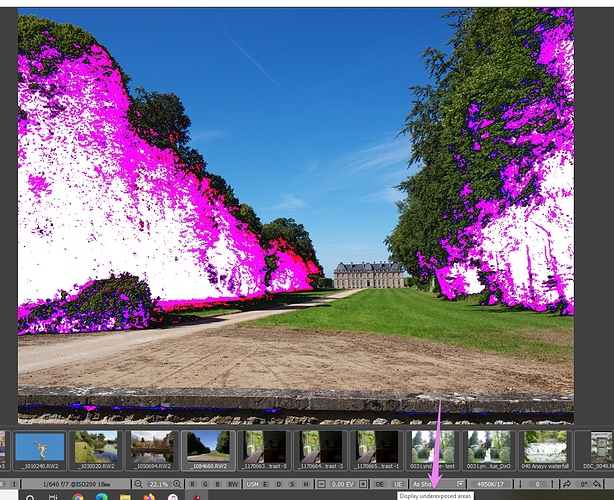 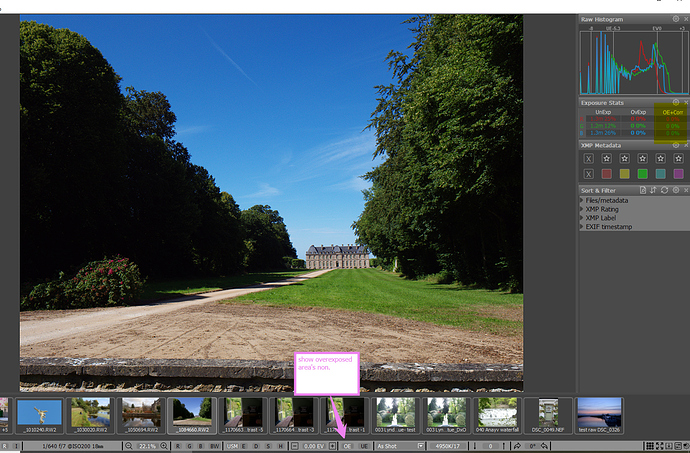 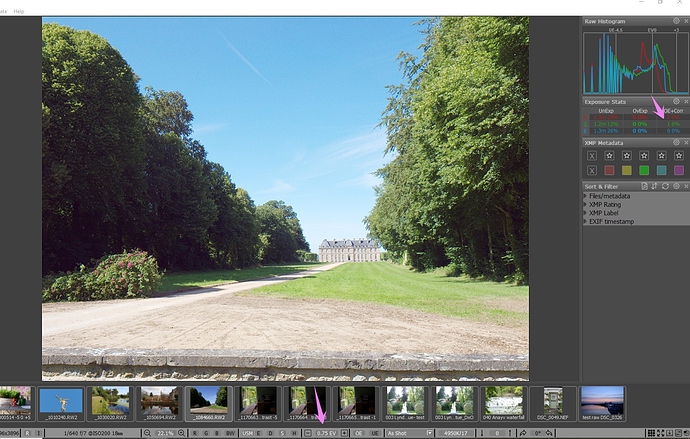 DxO has fixed color cast issues before (e.g., PhotoLab 2.2 and 2.0.1). They might be able to fix the magenta cast for the G9 also. The G9 issue (magenta cast when lifting shadows +3 EV or more) has been discussed on the Internet for over a year now, but maybe no one’s reported it to DxO as a bug yet. I’ve seen even worse performance reported for the Panasonic GX9 using ACR - hopefully that’s not a big problem with PhotoLab now. (It was discussed here as a PhotoLab issue a while back.)

I also suggest making sure your camera’s firmware is up-to-date.

Thanks for the analysis, i use zebra at 105% in my g9, but i think my g9 has a tendency to show zebra too ‘‘early’’. I’ll try to apply a permanent correction.

yes i have the same “issue” with my G80.
i turned it on a few months ago to see if it’s helping me and find it rather agressive.
It’s bound to the sRGB/ARGB colorspace i think and not to the rawfiles “colorspace” / luminancerange.
Same as the histogram feature in preview mode also sRGB (jpeg) mode and not raw.
i think all camera’s have jpeg sRGB histogram and overexposure/underexposure stripes preview and not raw based information preview.

Thanks for the feedback
Yes it is up to date

I thought that I might give this file a try. I haven’t completed my trials yet but I have found a possible(partial?) solution. Not a cure by any means but better rendering at any rate. In the past I have had some problems with getting an orange hue when raising shadows by more than two stops. I found the cure for this is raising the shadow control in FP5 elite an equal or greater amount. This trick did not solve the magenta problem with this photo. I then tried the generic color rendering option “Neutral color/ realistic tonality (Gamma 2.2)”. This is the bottom option in the generic renderings tab. While it didn’t eliminate the magenta cast completely, it does make it at least tolerable. 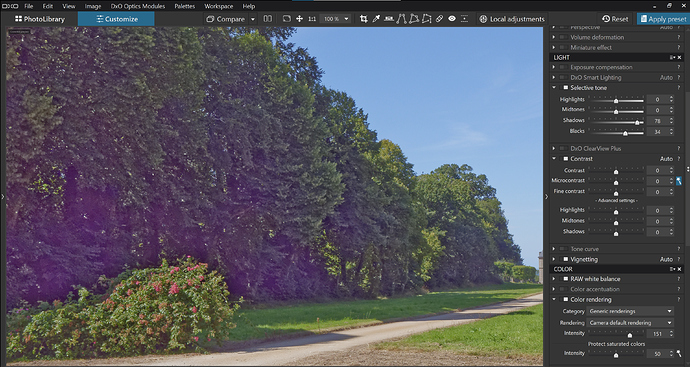 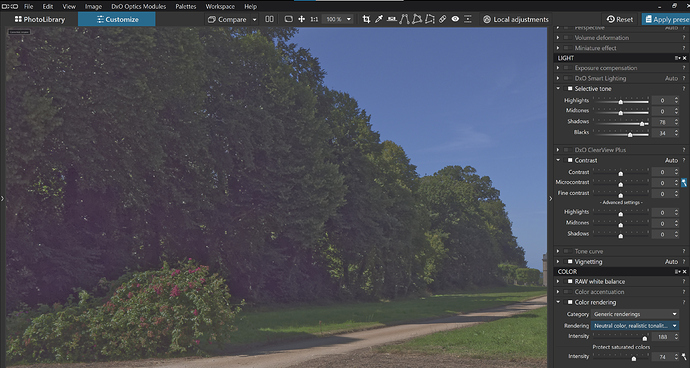 Final version after adding a little contrast, clearview plus, and smartlighting spotweighted on the problem areas in slight mode. 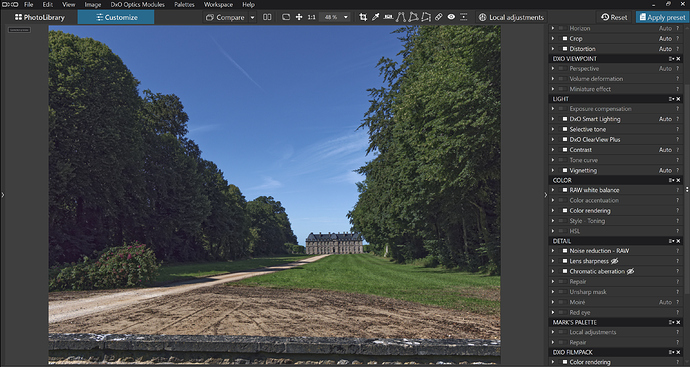 Even though this is a usable workaround, I agree with @mwsilvers that DXO staff should take a look at this problem. Perhaps just a small change in the appropriate camera/lens modules could solve the problem without having to employ this workaround.

I also sometimes see drifts in the shadows…
For me the normal solution is to use the curve of the tones, but what a mess with DxO VP ! It is necessary to correct the judged by going back under the histogram to see precisely the effect applied on the RGB values
This tool is a calamity in DxO PL level software
An adjustment (to be refined) for this photo: on the black point of the curves, set +7 of green and -4 of blue
I take the opportunity to renew here a demand for evolution of the tone curve to have at least at the level of the average of the software of processing of the RAW

Despite PL’s magenta drift behaviour, which I also encounter from time to time on a Lumix G9, Man’s original picture is nice example where ETTR could have avoided this issue right from the start. It seems that there was plenty of room left for a positive EV correction.

Hi, i do ETTR, based of zebras set to 105%. But i realized with a set of pictures including this one that the zebras, even at 105% setting, are not reflective of the raw histogram. Same for blinkies in replay.
Fast raw gives me a margin of 1EV/1.33 before having burnt highlights.
i therefore now will bracket in this kind of high dynamic scene.
Nevertheless, results to recover shadows without the magenta cast are better in other softwares.

The magenta drift here is not only linked to PL since we have exactly the same problem with ACR (Ligthroom). But it would be nice if PL found a solution …

HELLO the sensitometric curves are not linear sooo you have to control with the U point ! so it is normal , 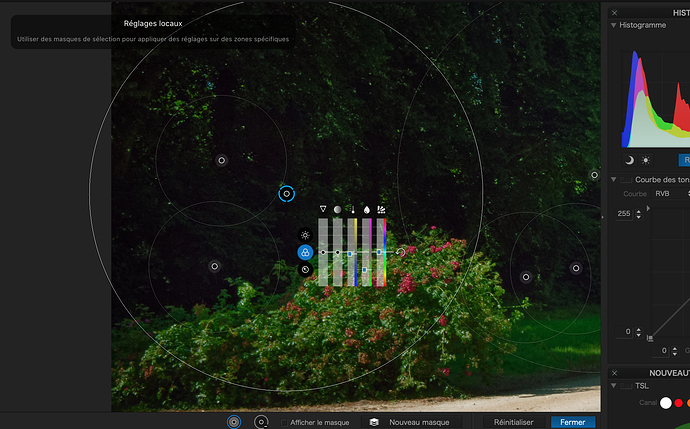 Welcom to the forum.
would you care to elaborate? (give some more information?)
I had to look up “senitometric” and i assume the controlpoint you talk about is for lifting and colorcorrection purposes?