Is there anything in pureRAW functionality or usage that is not also in PL5? Let me clarify what I am asking.

If I load raw images into PL5, apply a preset to all of them and then export them as tiffs, will I get any different results than if I process them through pureRAW? Does PureRAW do any different analysis and correction than PL5?

I understand that pureRAW is supposed to be for people who want to prepare images for PS, Lightroom or other editors and PL5 is a complete solution with the ability to call either PS or Lightroom, but I am asking if pureRAW gives any additional or smarter processing that PL5.

One is using AI to quick process your file while the other one let you adjust any settings you want to get the results you like.

That is about what I thought, but I wonder if there are any AI processing presets in PL. Can you get PL to do what PureRAW does and then make further changes?

Everything in PureRAW is in PL5 and more. In other words, PL5 can do everything that PureRAW can plus a lot more.

But the question is, is there a PL AI preset that will allow PL5 to do automatically what PureRAW does automatically?

Now what you do in PL you largely have to do manually.

You can create a preset yourself using the preset Editor. This partial preset should only contain settings for Lens Sharpness, Denoising Technologies, Distortion, Vignetting and Chromatic Aberration. A partial preset will only apply the specific settings. You can use the automatic settings (magic wand) for these tools or set them any way you like. If you create a full preset, you will overwrite any changes you’ve made to any other settings.

Or, if you prefer, make a copy of the DXO Standard preset, Make sure you add settings for those tools I mentioned above, and save it. Then, you can make this new preset your default in Preferences. Every image opened for the first time well now have all the settings used in PureRAW included. Of course, unlike PureRAW, you can modify the settings to your preferences.

I’ve been on a trip and just returned. All of my prior posts were done on my smartphone and, not being particularly good at using that tiny “keyboard”, they were necessarily short. Now I have a regular keyboard and can explain what I am asking, hopefully better, hopefully not too wordy.

When you create a preset in PL you model it after settings for an existing image. That usually means fixed values - exposure, so many steps up or down, sharpening - such and such a percent, ClearView - such a percent, and so on. As far as I know there is no “AI” analysis of the image in PL. It applies a distortion correction (if specified), applies the settings in the preset, some of which may be “magic wand” but most of which are not.

I have quite a few presets that I have created for different types of images, but if I use one of them on very different kinds of images, say morning landscapes, indoor museum shots and late evening street photos, then the preset that works for one does not work for the others. I get good ClearView adjustments on the landscapes, but way too much for the indoor shots and the late evening shots are impossible. The setting is fixed and so is too little for some images and too much for others.

As I understand it, when you use PureRAW the software analysis each image separately and applies a different amount of each adjustment it uses depending upon what is needed.

Theoretically what I want to do is run PureRAW on a series of raw images, output tiffs and then make any further adjustments, based on any peculiarities of those images that PR did not adjust to my liking. I can, of course, do that my using PureRAW and then feeding the output into LR or PL itself, but what I was asking is if PL5 was updated to include the AI analysis that is used in PR or if there was some way to create a preset to do that type of individual image analysis.

I ran PR on an old MacBook Air (2015, i5) and was amazed at what it did with my raw images, but it took forever to process. A medium size batch of images took 8 or 9 hours to process so I would like to try it on my 2018 i9 MBP, but can not because I apparently let PR sit on it months ago without testing it and now my demo is expired. Hence the question as to whether or not there is any way to create an AI type of preset that would adjust images based on their state rather than on the preset settings themselves.

I hope that is clearer than my previous posts.

As I indicated in my earlier post it create a partial preset for the five settings I mentioned. Keep all those settings at their default or magic wand settings. Apply that preset to your images before exporting them and you’re good to go. It’s really not any different then just manually selecting those tools when you’re editing a photo now.

I’ll give it a try. Thank you.

Apply that preset to your images before exporting them and you’re good to go.

Perhaps I am doing something wrong here, but I don’t know what that might be.

I processed an image in PureRAW and then processed the same raw image in PhotoLab 5. I did the PL processing several times - once applying the No Corrections preset and then applying the 5 specified settings manually making sure that the auto setting was on, once using a created PureRAW partial preset as the basic preset to be applied to imported raws and once applying the No Corrections preset and the the PureRAW preset - and compared the images to the PureRAW image and they did not match. Some images were very close and one seemed to be identical, but most were like the combined image below. The left half is the PL and the right half the PureRAW, combined in Photoshop. 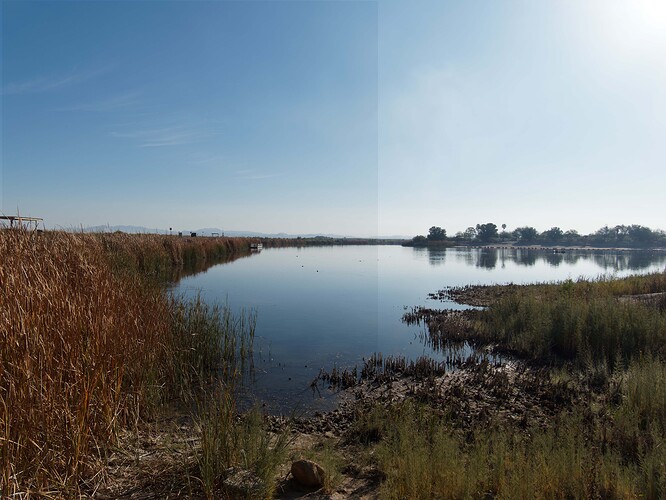 Still I guess I can use the pureRAW preset as an initial preset and then go through the images manually. 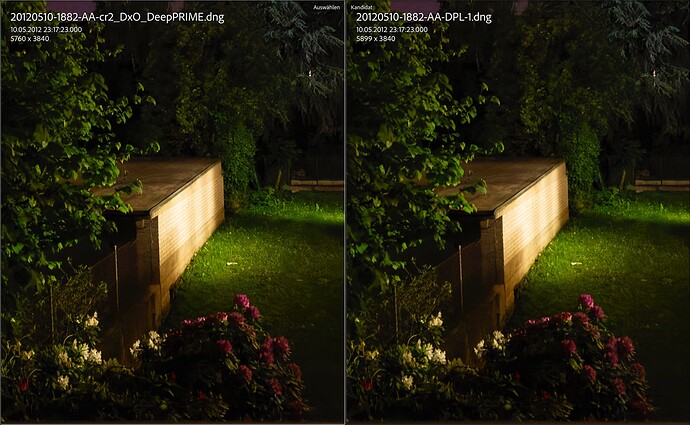 Yes. That seems to work as I could not see any difference between the PL5 and PureRAW images. I compared jpgs but I am sure the dngs will also be identical.

The profile DxO standard applies smart lighting this changes the brightness of the image
The equivalent of PureRaw is DXO Optical corrections and then you change your noise reduction accordingly to what you want.
If you use DxO standard the file will drift away as lightroom can’t manage those changes easily

I’m sorry but I don’t understand what you mean by the file drifting away. Could you please explain?