PL5.1.3.4720 on Win10 should always use xmp embedded in TIFF for 'Rating' even if xmp sidecar exists

In the meantime I used a Trial copy of C1 on my Test machine with PL5 and all worked well for a while but then the programs stopped “seeing” one another, i.e changes to ‘Rating’ went unnoticed by the other program! Returning to my main machine but continuing to use the Flash Drive changes made in PL5 were not being seen by Photo Supreme Lite and vice versa!!

When I checked an xmp sidecar file had been created (probably by me altering C1 settings) and it appears that PL5 started using the sidecar file while the other software, C1 on the Test machine, PS Lite on the Main machine and PIE (used for monitoring) on the main machine, continued to use the TIFF (as all software should!) @sgospodarenko. So I need to start a new “bug” topic if I can remember how to do that, plus get on with my life!!

@sgospodarenko once a sidecar file has been created for a TIFF then PL5 starts using that sidecar instead of storing the ‘Rating’ data in the TIFF itself. I will also test this with normal DNG and JPG but in all cases other than RAW the embedded xmp should be used and the xmp sidecar file should be ignored or so I believe.

Please ignore this post PL5 does not appear to use xmp sidecar files when reading ‘Rating’ (and other metadata) from a TIFF image file.

all cases other than RAW the embedded xmp should be used and the xmp sidecar file should be ignored or so I believe.

I would agree with this!

@KeithRJ & @Joanna Thank you for your comments and support for the idea that a TIFF (or TIF) should NOT be accompanied by an xmp sidecar for storing ‘Rating’ (or any other data) and that PL5 should not take data from a sidecar file if present!

@sgospodarenko I owe DxPL an apology for suggesting that PL5 was using a sidecar if present in preference to the embedded meta data IT DOES NOT - I WAS WRONG.

I was looking for @trikke’s problem of corrupted TIFFs by creating a s l o w link to the data and managed to use software that is too easy to configure to use xmp sidecars and then things started to fall apart and I wrongly concluded that PL5 was using (reading) those sidecars.

@sgospodarenko @Joanna @platypus @KeithRJ I apologise for my error but it was prompted by an issue whereby PL5 appeared not to be keeping up with C1 during a test and I introduced additional software to see “who” was telling the truth and “who” was lying! Unfortunately introducing new software only created more problems in the shape of sidecar files etc!

The following test was conducted using WIN 10, files no longer on a flash drive but now back on an HDD.

Photo Mechanics (PM) and PL5 were the “Raters” and IMatch, FastRawViewr(FRV) and PIE the “monitors”. IMatch updates automatically but with a slight delay; FRV and PIE only update after a Refresh command.

The ‘Rating’ values for the TIFF files (and there lies the “large” problem) were all set to 1* by PL5 before the other software were targeted at the data now on the HDD. PM was then used to change the ‘Rating’ of the 6 photos changing the Rating’ to 5, 4, 3, 2, 0, 5 as quickly as PM would allow.

With the ‘Sync’ option set PL5 kept up with the first two changes, then missed two, caught one and missed the final change. All the other software then caught up automatically or after a Refresh.

PL5 then needed a ‘File’/‘Metadata’/‘Read from Image’ command (effectively a refresh, albeit one that will update the database, update the DOP and update the display) after selecting all the photos to ensure that it finally “caught up”.

I realise that when setting the ‘Sync’ option there is a warning and the issue is exacerbated with the tests carried out here by the size of the TIFF files being used, they are far larger than anything I have used in testing before.

Because of problems with ‘Rating’ going missing I have been suggesting PL5 users use the ‘Sync’ option to ensure that the ‘Rating’ makes it off the database and out to external storage, but now what do I suggest, what should the PL5 workflow look like to ensure that it is easy most of the time but also totally secure?

Hence, I was disappointed that PL5 could not keep up and that manual intervention was needed. IMatch sometimes seems a little “ponderous” to me but it didn’t miss the changes made by PM and got there in the end without any help from me!

I am concerned about the detection mechanism used in PL5 that captured some changes and then when “things got rough” missed changes. I am also concerned about whether PL5 uses “brute” force with the ‘Medtadata’/‘Read from image’ (in truth the update on my 6 images was quick but I am not offering to repeat the exercise with hundreds of TIFFs) and at that point I am out of my depth!

How could PL5 have avoided this problem I am not sure, how “heavy” is the touch that PL5 exerts when reading metadata from a large directory of TIFFs I am not sure either but the first thing we need to know is how PL5 does what it does - that old question of feedback and a two way conversation!

I have bent my credibility a bit with the item that started this topic but that is “only” my pride that is damaged, if users run into the problem I encountered here (as a result of my or other people’s recommendations) then that is a whole different thing!!! 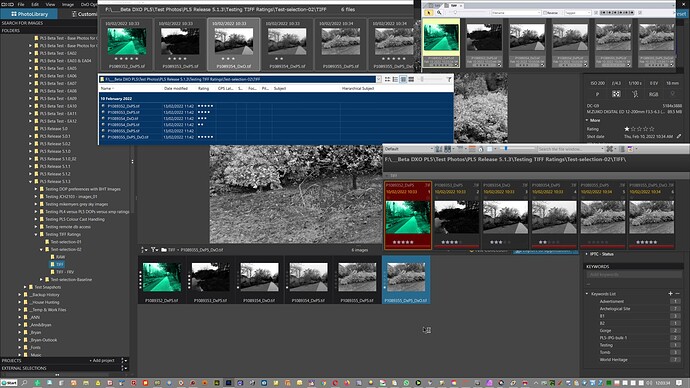 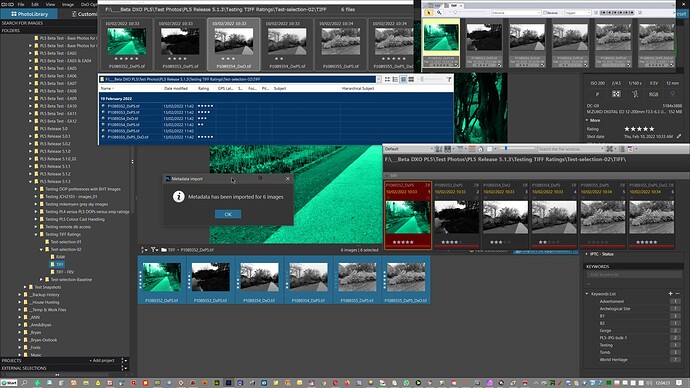 EDIT:- I took delivery of a new NVME today so I saved 880 photo RAWS in PM with ‘Rating’=1* as TIFFs. These turned out to be rather small TIFFs about 23MB.

I then ran a batch task in PM and set ‘Rating’=5* while the directory was open in PL5 and all were updated to the new 5* rating in PL5 successfully The PL5 DB is also residing on the NVME.

The test above needs to be repeated on HDD.

Both tests then need to be repeated with much larger TIFF files just to see what it takes for PL5 to be unable to keep up.

Putting the photos on an HDD and then moving the database to its location on a USB 3 connected Sata SSD did not change the results. PL5 certainly ran a long way behind the PM ‘Rating’ change but there were no wrong ‘Rating’ values at the end of the tests.