Hello,
I don’t think this is a PhotoLab issue, but I don’t understand why I experience this: 2 pictures in Raw, all in manual, same settings => different exposure result.

I’m doing some spherical panoramas (360x180°), so I shoot everything in Raw and fully in manual mode (except white balance).

My gears and settings: Pentax K1+ Samyang 12mm / Raw, everything in manual. Every autosetings are set in “off” in the camera. I work with DXO Photoloab 4, every settings are desactivated.

My issue: I shoot 6 pictures, 1 every 30° (25% overlapping, even more with the 12mm), and sometimes between 2 pictures I have a high difference in the lighting result.

Here some screen capture, look at the white bags: 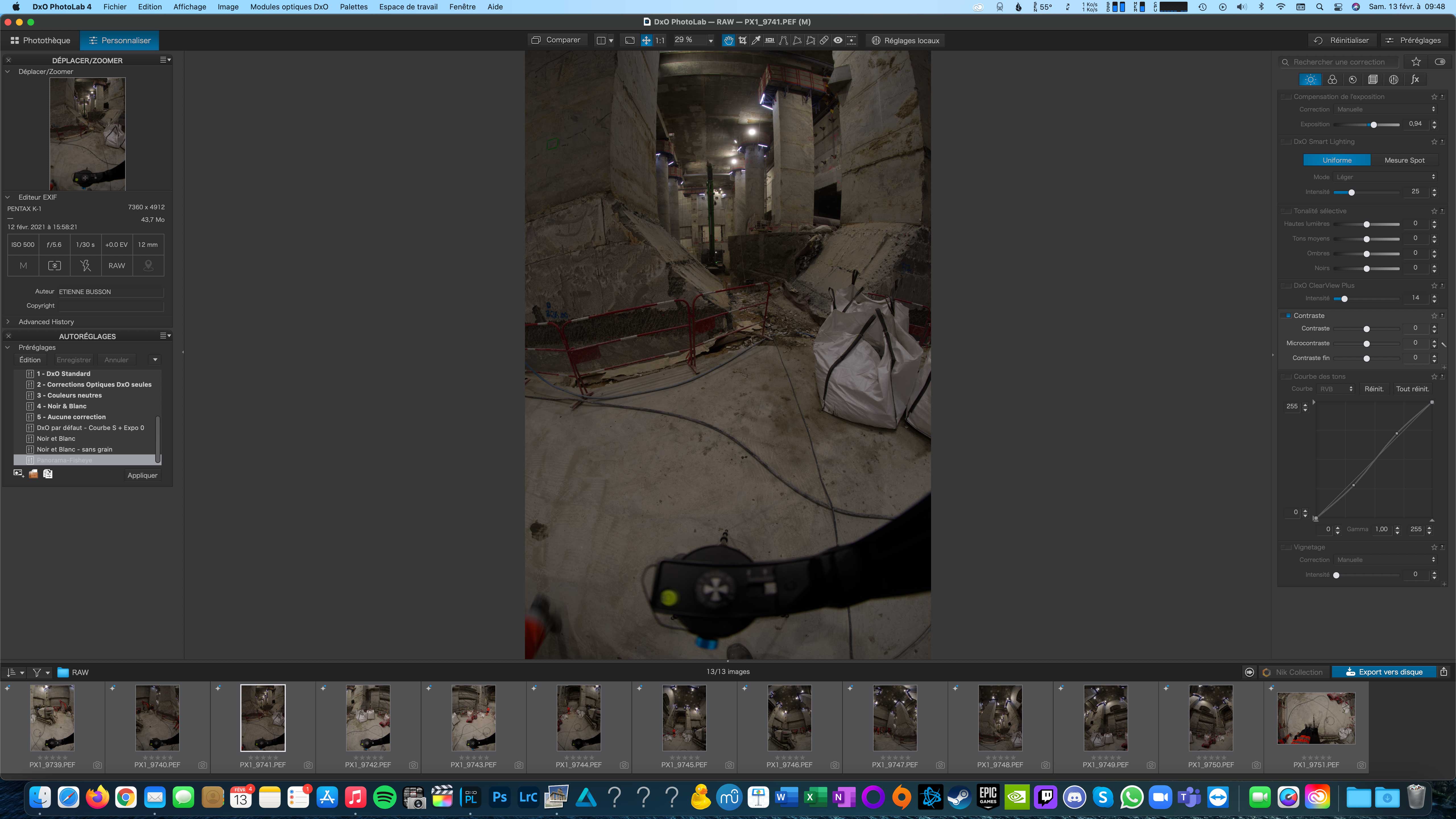 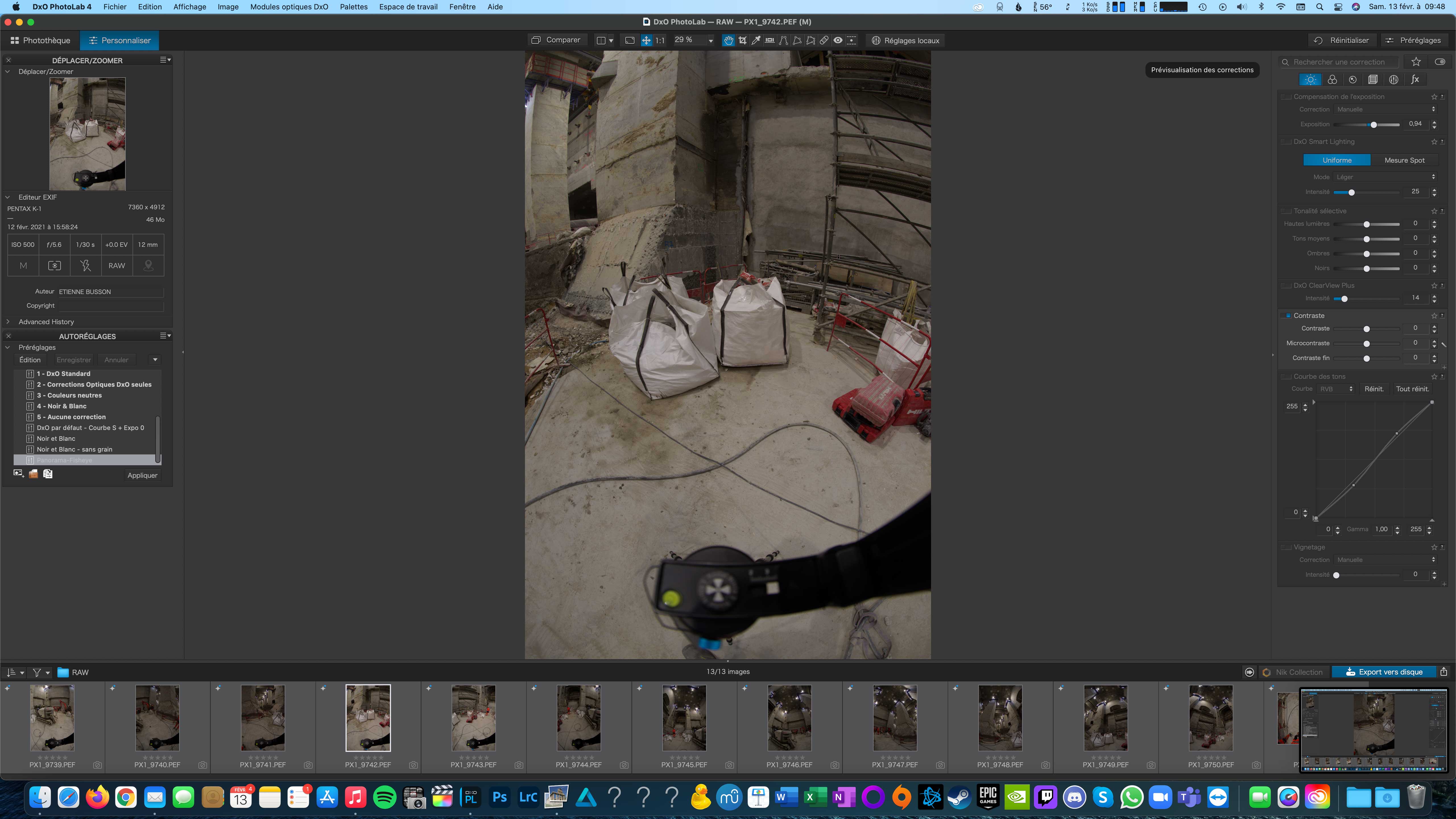 And the 2 concerned raw file:
https://www.panochrome.fr/images/dxo/issue-ligthing/archive.zip

If someone has any idea about what is happening, and how to solve this, it will help me a lot. I really don’t understand

(even if PTGui corrects the lighting issue during the stitch, it remains often a problem with the nadir shot)

So you confirm I’m not crazy

I had these differences too sometime, but then it was the camera/lens failure. So also the embedded jpg.
I compared them in pl with both reset and ‘no corrections’.
George

@Edge and @George,
having tried with pano pics, I was curious and opened the files …

FastPictureViewer and FastStoneViewer don’t show a difference, but FastRawViewer does – like PL4.
[ RAWDigger indicates a different (auto) blacklevel, but I understand to little about this program. ]

Camera metering? The darker image has bright lights in the background, which might lower the overall exposure. That’s all I can come up with right now.

my first idea, but ExifData confirm that both files are taken in manual mode

Ok, it’s clearly a PhotoLab issue: I opened the Raw files in preview.app and in Camera Raw, and the pictures have similar exposure. I checked the exif in exiftool too, and both have the same Light Value (7.6), only the black point value is different (64 for one, 128 for the other).
So it seems like PL applies some correction, even if we ask not to. I suspect the Exposure or Smart lighting.

It’ll be the impact of Smart Lighting, I reckon … perhaps because it detects more white/bright surfaces in one of the shots, compared with the other. The pano-stitching software I use happily handles small differences like this - so I don’t worry about it too much.

@Edge, you say you set the camera to manual but I think I might have found something that you may not have checked in the menus. 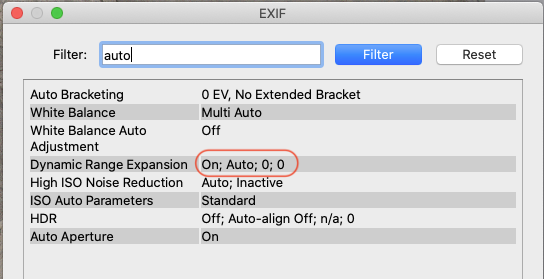 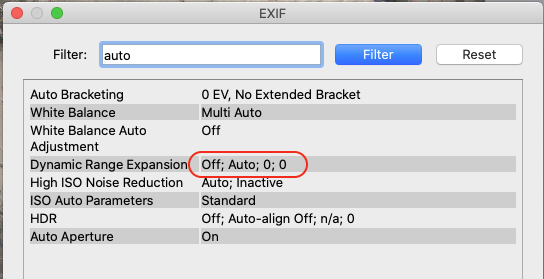 My guess is that PhotoLab is detecting that and applying a correction automatically, possibly based on its analysis of the camera body, even though there is no Optics Module available, due to the lens being unknown.

Something else that I believe may confirm this is that, for a second or so, when the images are first opened, the thumbnail for PXI_9741 is brighter and then goes darker.

I seem to remember reading a post here about the need to ensure that certain settings are disabled on the camera because, even though, in theory, you are using RAW files, some things like these fancy dynamic range enhancements in camera do get recorded. It’s the same for my Nikon D810 with its Active D-Lighting, which I turned off as soon as I got the camera.

I also notice, according to FastRawViewer, the white balance is ever so slightly different on the two files… 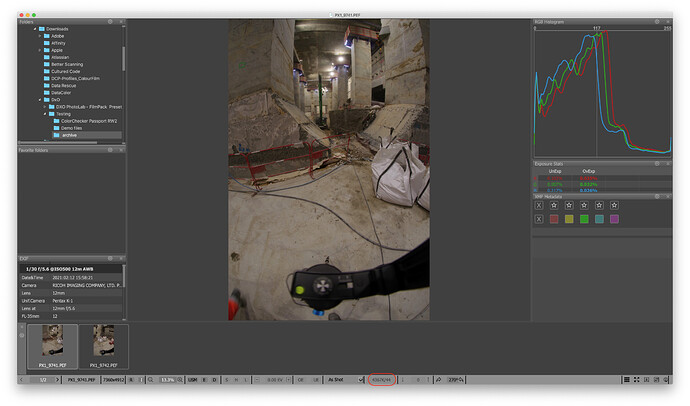 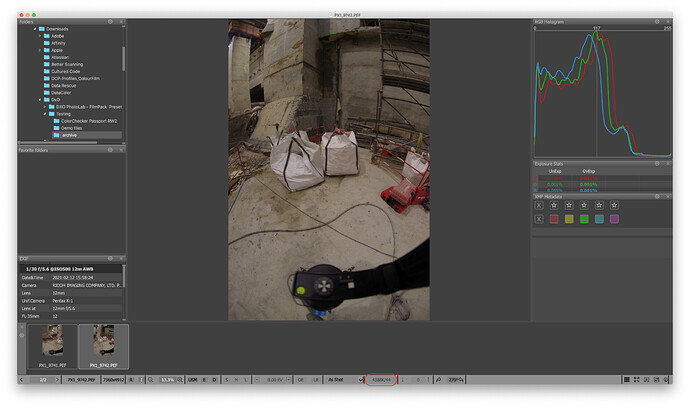 @Joanna Thanks for your answer. Effectively there was a Dynamic Range setting set in “On” in the camera, I change it for off. Naively I though that a raw file has no setting, just the sensor input and that all those settings were only applied to the jpg file. I don’t understand the manufacturers …

Concerning the WB, as I shoot in Raw I do the white point in DxO, so I don’t think this is an issue. But once again I will set it to an arbitrary value.

Anyway, I still don’t understand why 2 raw files in M mode don’t have the same lightning result. I hope someone at DxO has an answer.

Ok, it becomes more and more strange: I tried to set the “Dynamic Range” exif value to “off” and also “on” on both file (with ExifTool), and this has no effect on PL, there is still a 1 stop difference.

But now, just by editing the Exif value, whatever it is set to On or Off I see the same lighting difference in preview.app and in CameraRaw! (with the source files, the pictures were ok in those app).

There is something strange with Pentax K1 raw files.

Ok, thanks to @Joanna this is effectively a Dynamic Range Exposure issue. It should not affect the Raw file, but I found in an old topic that apparently some Raw converter still apply some conversion curves:

If the Raw data are “untouched”, could it be possible to have the Raw data used in PhotoLag instead of modified ones (ie: adding a menu to deactivate all camera mode)?

Obviously this DR thing cuts in with the over-exposed lights in the picture in question. So have you now tried turning off the DR setting on the camera and trying photographing an averagely lit scene that contains a light you can switch on or off to simulate the two shots you submitted?

In the Link you posted it is explained:

I checked the exif in exiftool too, and both have the same Light Value (7.6), only the black point value is different (64 for one, 128 for the other).

), Active D-Lighting or Highlight Tone Priority. They all do basically the same trick, but DRange lies about the actual ISO. The Black level in the RAW is relevant, hence the difference in PL and AP. Viewers not showing the difference probably read the embedded JPG, not the RAW. Camera RAW may interpret the DRange flag.

I would stay away from all of these when shooting RAW. The results are confusing, as we see here. The question comes up in one form or another every few weeks.

Thanks everyone for your help

So finally it’s confirmed that the D-Range make a mess with the raw file, and then the camera lied about the ISO in the Exif (maybe on other tags?)

@Calle I will effectively stay away off all those “toy settings”
To conclude I find this very annoying what is doing the manufacturer: if I shoot in RAW + Manual, that means that I know what I’m doing, and I don’t want to be tricked by my camera

I noticed something similar on a canon eos camera. The files shot with “D+” setting on appear dark in PL4 and look like standard exposure in fastone and lightroom (I did not try any other). As Christian said I think it is a matter of reading the embedded jpg (which has standard exposure) or interpreting the raw file according to the iso read in teh exif.

You may want to turn off the K-1 multi-auto-white balance to make sure that isn’t influencing your images. Try using a manual WB setting instead.

@larrymc I did this now, but with raw files it shouldn’t have any consequence on the picture: I set the WB manually on PL and it should be ok. But this dynamic exposure thing made me wary