These crops are from shots of a white wall and part of a black camera bag.

Here, at the default setting, we can already notice that the color of the white wall isn’t blueish contrary to what the slider is indicating. 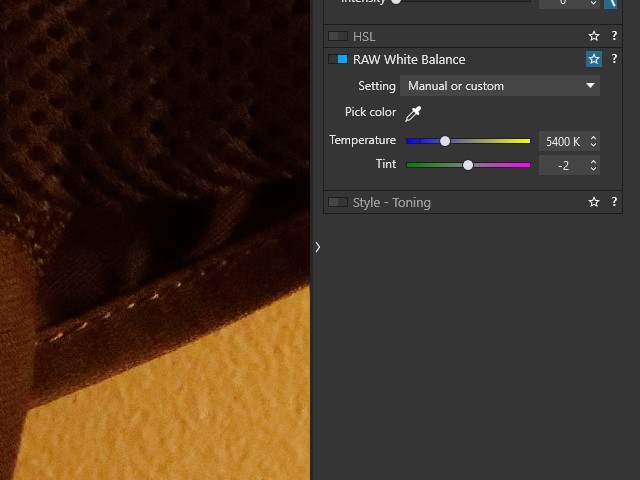 With the slider set up to the bluest possible the temperature displayed is 2000 K, which, actually, is the color of candlelight. The values seem to have been inverted. 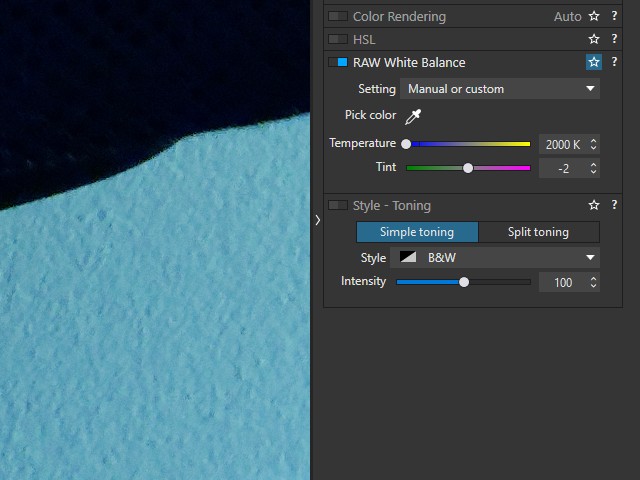 If we set up the temperature as far to the right as it will go we get a sort of reddish/orange light while 50000 K is indicated, which should be… I don’t know where, Gamma rays ? The hotter a black body gets is some 5500 K, emitting a light of the purest white. Could be that I am mistaking so, please, show me my error. 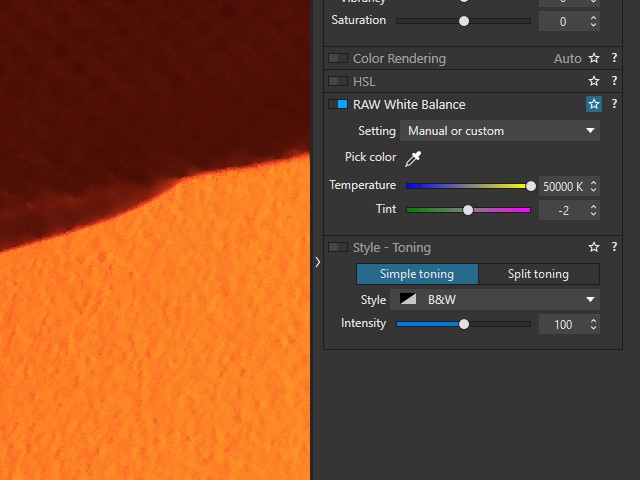 See you in some color.
Jean

the color of the white wall isn’t blueish contrary to what the slider is indicating.

The color gradient of the temperature and tint sliders indicate in which direction you’d have to pull the handles if you wanted white to be more blue, yellow green or pink. The respective positions of the handles reflects the WB settings the camera used for the shot, it does not mean that white is yellow or blue or green or pink…

i try to understand what you asking.
what was the camera setting? the wall is almost never “white” , egg white, terracotta white, enz.
and which lightsource was shining the "white"wall?

Oh boy, all I did all these years was pulling the sliders without even looking at them then, having eye just for the image ? Well, it worked until it did not anymore.

Thanks for the explanation. I’d rather be wrong, since there’s an easier solution to that, than having PL not work right.
So, I guess that the temperatures ranging from 2000 K to 50 000 K are those of the illuminant of the scene. Let’s say that I took the photo at the light of a 3600 K bulb, if I bring the handle to 3600 on the slider this should compensate for the color cast and my wall should appear white, as it is said to be on the paint can… Right ?
The value of 50 000 K still puzzles me a bit though : why so high ? The limit on my camera is 10 000 K.
Thanks anyway Platypus sir !
Jean

Hey OXiDant !
Platypus got me out of my misery and it did not even hurt… well, it could have if I had any pride left.

I thought, naively, that the value on the slider was what we would get rather than, as it appears, the color of the light in the shot.
Don’t worry, I still have other questions. Most of the time I try to find the answer by myself. You will read from me only when it happens that I my answers won’t work, like this time.
Be well.
Jean

I thought, naively, that the value on the slider was what we would get rather than, as it appears, the color of the light in the shot.

White Balance Explained: How To Get Accurate Colors In Your Photos

White is white, except when it’s not. Discover how to use your camera’s white balance setting to ensure accurate colors in your photos every time.


read above it may help/

…that is a good approach. Just pull until the image looks right. You can also use the WB pickup tool: press the “W” key to engage and click on the part that should be neutral - any gray part in the image should work.

… any gray part in the image should work.

If there’s no suitable grey in the image, I’ve found black or white can work well too (with the colour picker).