ORF files from Olympus Tg5 show corrupt but only in PureRaw

I use PureRaw to handle high ISO ORF files from my Olympus TG5, mostly bug shots (I’m into iNaturalist) and it has been working great for 2 and a half months.

Tonight, for the first time, several of my shots came off the chip as corrupted, at least in the thumbnails, and I thought it was just a glitch in the thumbnails creation but the corruption came through in the output as well.

When I load these corrupted ORFs into Lightroom or Photoshop, they come in fine. Is this a know issue, and why would it be happening all of a sudden when it has been working fine for so long?

Any help would be appreciated. Thank you.

Here is what the corruption looks like in Thumbnail. All affected files have the same pattern in varying widths and colour from the left side. As mentioned, the files open fine in Adobe Camera Raw and other apps (including Topaz DeNoise AI). And copying the ORF files to disk and trying again gives the same corruption. Any ideas? 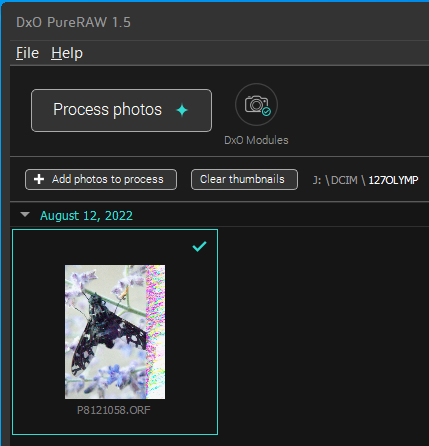 Maybe you could try to report your bug here: support.dxo.com.

Does the “ghost” also appear when you export the file as DNG in a non-DxO app?

Thanks for your suggestion but the problem seems to have fixed itself once I rebooted the whole system. I’m still not sure why, but I had been running a lot of apps at once during the editing and even though my system has 32Gb RAM and 6Gb vid, I suspect that not all the apps are ‘leakproof’ and I had the system off and in sleep for a few days when this popped up. Also, in my workflow, I only launch PureRaw for the initial processing after all the other apps are ticking along.

It’s a relief that my shots were fine and processed no problem afterwards but as to why only in PureRaw remains a bit of a mystery to me. At least I have a fix, even though the problem has not reoccured since.

As a naturalist, I really appreciate the combination of the Olympus Tg cameras with PureRaw as I can shoot very noisy macro shots without flash at high ISO and still know that I’ll end up with a absolutely usable files for ID work – after they go through the ‘PureRaw’ wash. It’s the ability to use those high ISO settings that is like adding an extra two f-stops that makes it all possible.

Thanks again for your reply.