Some guys who wants to create rules to drive photographic artistic field, make photographer pay to validated with a very doubtful method that their shoot are not faked, and eliminate photographers which don’t pay or don’t have a style defined by the standard they decide to call not faked, from some photographic exibitions.

They contact exibition organisms to join them and adopt their standard.
And try to convince photographers too.

An organization designed to certify, primarily wildlife photographs, to ensure that they have not been overly altered as a result of the recent overabundance in that sector.
Regards

@Mantraya
Will you take time to respond my questions ?
Biggest one being how to pretend scientifically knowing what true colors where when taking the shoot.
Or how to define true colors ?
Or how to pretend this is not a subjective choice of styles that have been made to create the benchmark ?
Second one being how to prove those algorythms won’t eliminate photographers who shouldn’t have ?
Look at my last extreme but explicit sample.

Dear JoPov
I believe the biggest issue is that you are not speaking to the appropriate person. Who am I to respond to your query? I’m not employed by the IRCC. I’m just a photographer with some inquiries on how to get a basic sense of his photographs in order to determine whether or not they qualify for certification. You are opposed to this method, which I understand because I understand all of the reasons you raised… but this is not my aim, and for the time being, I am attempting to work with such a certification system because it is mandated by the competition’s jury.
Regards

Sorry, it looked like you was supporting this initiative …
and anyway good luck for your certification.

Do you think IRCC would have validated this one ?
I think not.
I set white balance in post, so my camera set white balance raw information to create a very neutral sky, not showing late after sunset atmosphere.
More than that, light was decreasing fast during this end day cession, and I had not tweaked enough exposure for this burst, so raw is under-exposed (big thanks to fprime for this one !).

So yes, their algorythm would have shown to much r,g,b,v delta to validate this shot as ok.
Nonetheless I was baithing in this light when I took the shoot.

And generally, in low light like this with moving subject I often underexpose the subject and rely to dynamic range to recover value. Forbidden way of shooting ?

So what is true rgbv value ? 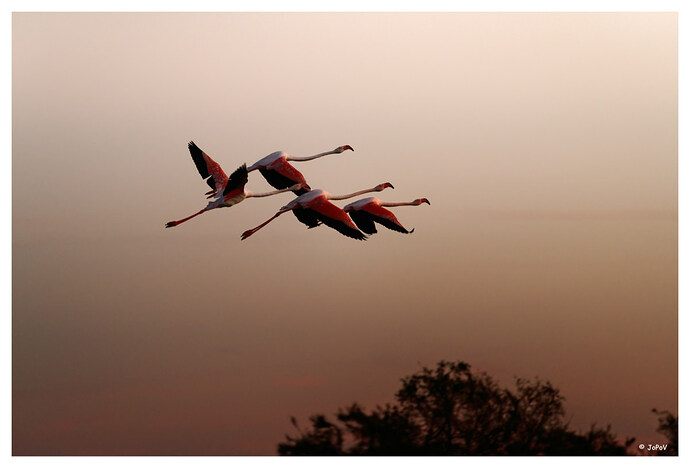 IRCC will compare 4 set of data, the Raw, a sample exported by them, a gray image exported by them and the processed images submitted for certification. They also perform analysis to detect modifications as cloning, deletion, replacement and digital brush. They are also checking the Metadata, geometrical transformations and distortions.
It does not matter what algorithm, just one know by them for what they want to do with. It is about calibration.
Science yes, transforming byte values in something else is what computing is doing, they are objective ways to do it, it can be tested, reproduce and verify, this is the core of the science process
IRCC is not trying to determine what is a correct or true color but just the deviation regarding what have been captured. The IRCC is not juging the aestetic of a photo or the style of the photographer, they are not performing subjective evaluation but quantifying deviations. You can submit a fuzzy overexposed photo of a dirty underware, they will certfiy it if the photo pass the certification criteria.
There is certainly challenges to consistently export RAW images taken by cameras using differents technologies, but it is about calibration. If you export one image and consider the algorithm you use is valid of all Raws you a wrong but if you do it for 10000 images you can eliminate from your process the eventual algoritm artefacts associated wth specific technogies used by various cameras.
I think you miss undertstand IRCC role. They are not artist, it is a certification boby applying the same reproductible process to all images submitted for certification, they are not performing a subjective evaluation. It is like when you certify a car, the certification body does not care if it is ugly, or smell bad, it will check the brakes, checking if the car stop on a certain distance, it is not a “true” distance but a statistically reasonable distance based on thousand tests.

I call datas they extract from raw “true rgbv value”, because if delta = 0 between them and rgbv value of final image, you are the big winner. Your final image has the highest possible score of no deviation ! (jump of joy). They are the maximum thrustable possible value your image can have ! So true value !
If so maybe they even give you a medal ! (just kidding. Euhmm, am I ?).

So the big question is : are those true rgbv value relevant ?
Shouldn’t they be derived from what your eye saw when shooting ? Don’t choke, see below :

For illustrate this, my last post contains an image I’ve done, and I describe how far the raw is from this final image and why. And so how close the final image is from what I saw when shooting.
Do you think this image would have pass the test ?
And if not, do you think this is fair or not ? (maybe you think you don’t have to think ?)

And if unfair the question remains :
what are those arbitrary true rgbv values ?
Arbitrary, no mathematicaly speaking off course.
I understand there is a big matematical algorythm to compute them, and mathematic are supposed not to arbitrary; but photographically speaking

hope my poor english (little bit traductor helped) conveys humor I think in my native french langage.
So no offense.

it is not a “true” distance but a statistically reasonable distance based on thousand tests.

Yes we’re all numbers.
Where is number 6 ?

More seriously this is what I had understood. And maybe an IA ring to rule them all ! And this is what frightened me.
Artistic statistic. It rhymes !

Do you think IRCC would have validated this one ?
I think not.
I set white balance in post, so my camera set white balance raw information to create a very neutral sky, not showing late after sunset atmosphere.
More than that, light was decreasing fast during this end day cession, and I had not tweaked enough exposure for this burst, so raw is under-exposed (big thanks to fprime for this one !).

So yes, their algorythm would have shown to much r,g,b,v delta to validate this shot as ok.
Nonetheless I was baithing in this light when I took the shoot.

And generally, in low light like this with moving subject I often underexpose the subject and rely to dynamic range to recover value. Forbidden way of shooting ?

So what is true rgbv value ?

Dear JoPoV,
Whatever the IRCC thinks about it, this is a stunning image. You know, none of the images we took were taken to be certified or competed with… first and foremost, the photos were taken for our own enjoyment. If I decide to enter certain competitions, it is just to develop my technique by viewing the work of other amateur photographers, as having a large number of “Likes” or “Photo selected on amateur photo websites” will not help me to improve my self in capturing of wildlife scenes.
What you chose for this one is ideal, and the end product is stunning. Congrats.

A RGB image is a stak of 3 gray images, one for each color, where the intensity of each pixel is coded on 8 bits, so from 0000000 to 11111111 in binary, 0 to 254 in decimal (and 0 to FF in Hexadecimal). The IRCC analyzed a large number of number of professional photos to determine the average deviation of these pixels values between non processed and processed images to etablising a statistical consensus about what professional photographers consider as best practice (We are speaking of photojournalisme that must be as close as possible from the reality, it is not about art photo). From this analysis they grade the image in three categories: Deviation from 0% to 13% grade A, 15% to 21% grade B, up to 30% grade C, above 30% deviation the photo is rejected as outside the best practices for photojournalisme. To simulate this process and estimate if your photo will pass the certficiation do this:

The main difference between this process and the IRCC one it that the IRCC know the precise caracteristics of their RAW to RGB export algorithm.
This is for color processing grading but as explained before the IRCC performs others controls.