PL3 v3.1.1 built 31 on Mac.
I’m going through images then gone, no images, like the folder is empty. then its like PL is searching, then it load up the first image from the folder. i have to go back and select the image I was working on and keep working, then boom again few minutes later.
it is really annoying, I remember PL doing this once I updated to 3.1.1 like built 29 but before that I never had this issue.
wondering if someone else have this issue.
I checked for a log file but its missing, no log file in library/logs from PL/DxO
it doesn’t create a crash file neither as it doesn’t crash like closing itself unexpectedly.

just weird and really annoying, at least it save the work I’ve done before the image disappear.

…unseen on my Mac…

Never had this on my mac either. I would definitely get in touch with support

I’m going through images then gone, no images, like the folder is empty.

Just a thought, Mike - - Is it possible that your disk drive is “going to sleep”, such that it becomes unavailable to PL ?

disk drive is “going to sleep”

Nope, it does this only in PL, I spent few hours with Affinity photo but only when I open images in PL it does this.

I’ll be away all day but next time I’ll take a snapshot, like I said it doesn’t crash so no crash report, its like opening PL with no image but in the center it says no image selected and in the filmstrip you can see the wheel turning like its loading images.

Greetings,
Not sure you told us which OS you are running. A long shot. Might this be related to using iCloud?

nope, I’m editing RAW just uploaded to the computer, and some already shot few months ago, no cloud here.

here’s a screenshot, done exporting an image and boom its blank again, start editing another image and after doing some comparison it does it again. 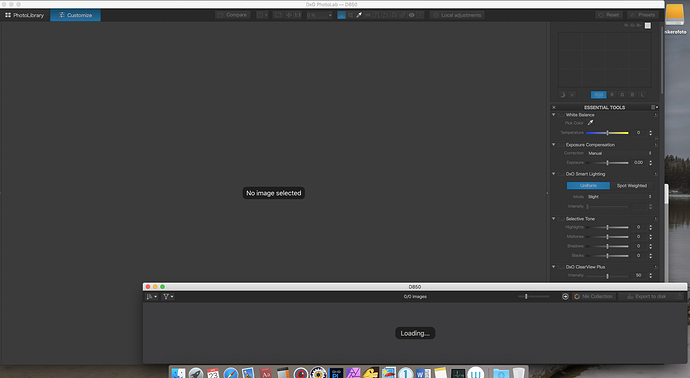 *edit
this happen only with PL3 v3.1.0 and above and latest 3.1.1 built 31
the only version that doesn’t do this anomaly is PL3 v.3.0.2 built 24 which I had to reinstall from time machine and after 3 images, nothing, no blank screen like the screenshot above.

Have you checked the filter on the filmstrip? There is an option for hiding images that have been exported.

hiding images that have been exported.

It doesn’t happen only after exporting, most of the time I’m in the middle of processing an image, while either using u-point or playing with sliders in palettes.

I went back with v3.0.2 and no issues, same setting, same images, playing over an hour and no blackout.
I’ll check if there’s a log file when using 3.0.2 as there’s none with 3.1.x

Actually I suffered from the same the other day.
Did an export and if I remember right just as PL was going to update the photo list with the just exported one it went clean.

I was in a hurry and had no time to further investigate at that time.

ya its like it lost connection with the folder, then reset and load images again.
just spent some time editing a bunch of images without any issues with the 3.0.2

just took a look and nothing in there, am I supposed to have a log file every time I use PL in the library/log folder?

Mike, would you mind contacting our support so we can investigate that issue a bit more thoroughly with you? They’ll give you a script to run so you can extract some logs after reproducing the issue, which will help us track it down.

I’ll install the last update again and give it a try if its fixed or not. If it doesn’t I’ll have no choice.
Hope for the best, plan for the worst =]

Oh man, so mad right now.
Installed the latest version downloaded from DxO website account about 20 minutes ago, that v3.1.2 built 42.
PL crash as soon as I try to use local adjustment or even export an image.
Re-installed 3.0.2 built 24, now I have the issue there too!
Now rebooting using time machine to install system back up from 3 days ago. 3-4 hrs to go for restoring

Sent a ticket to DxO with a screenshot of loosing image and a crash report from latest update.

Do you have the ticket number so I can look at it as soon as possible?

Also, in these cases, you might want to consider keeping a copy of PhotoLab on the side so you can restore it quickly, without having to go through Time Machine. Unless there are major breaks in the database format, it will work nicely, and even then, you would know right away that this wouldn’t work.

thanks, #207246, Seth contacted me by email and I need to download the diagnostic script. I can’t do that right now as I’m on a 1000 pictures project that need completion by next Monday.
I do have a copy of earlier version (PL3 first release and v3.0.2), when I had v3.1.1 installed it was just the image disappearance issue but with last version built 42, reinstalling v3.0.2 didn’t work, like the crash bug was stuck to the system so that’s why I had to go time machine.

as soon as I’m done with the project, I’ll download the script and re-install both version 3.1.1 and 3.1.2 so you can get both the image issue and crash issue.

Great, I’ll be keeping an eye on it!

one question though, i just sent this reply but its friday and you guys are already off work so maybe I can get an answer here before.

okay, I downloaded the script, one question though, it says do no exit PL, its fine if I do the update to 3.1.1 to get the no image in folder issue but if I install 3.1.2 built 42… “if the application is crashing, you must reproduce the issue, and keep the application in the state” PL close itself with this last update, what then? will the script still work?

If that’s a crash, just let it crash then run the script. If the application is freezing (and you see the spinning beach ball), then leave it as is, and launch the script with PL still being stuck. For any other issue, you just have to launch the script after reproducing the issue.