I have several Sony cameras and several lenses with the AF mount (including primes). I have just bought a Sony a7 (mount E) which came with the 28-70mm kit lens.

In my country, there is no way to be able to directly buy a Sony AL-EA mount adapter (from AF to E mount). Therefore, I will be buying a third party adapter that allows the AF mount lenses to be used in manual mode on an E mount Sony camera. With these manual adapters, EXIF data of the lens used is not recorded (nor can’t be read by the camera).

Prime lenses have a fixed focal distance. For these, it would be nice if (being DxO PhotoLab able to recognize the camera) I could tell the program (choose from a list of those lenses profiles already / previously loaded) which lens has been used (so the program could make the due corrections). Just for my primes (as for zooms, the focal length is variable).

Is there a way of doing what I would like to be able to do? If not, would it be possible or would it be too complicated to add this ability to the program in some future? 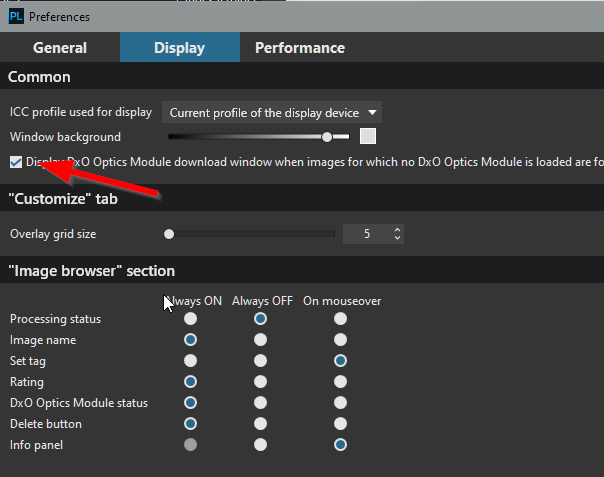 Hi and welcome! This question was also asked here:

Is there a way to force PL3 to use a lens profile other than the one in the EXIF? DxO PhotoLab Windows

I’ve swapped from my Nikon 14mm f/2.8D (ancient beast) to the new Rokinon/Samyang 14mm f/2.4 SP/XP. It’s seriously better than the Nikon but PL3 insists that I use the lens profile for the Samyang 14mm f/2.8 UMC. Distortion-wise the output from the 2.4 is very different from the 2.8 (less vignetting in the corners - particularly when stopped down to 2.8 - and it doesn’t have the ‘mustache’ distortion that the (IMO much lesser) 2.8 UMC did. That profile is giving me too much un-vignetting (not su…

And there is a feature request you can vote for if it’s still open:

Option to manually select a lensprofile Which feature do you need?

Hi. I would like to have an option to select a lensprofile manually; I have the fully manual Samyang (Rokinon) 14 f2.8 for Canon. A few years after I bought this one Samyang updated it with electronics for Canon (still fully manual). To my knowledge the optics are the same. Unfortunately I’m not able to get DxO’s excellent corrections on my version since DxO can’t recognise it without electronics. Please add a selector switch/button in DxOPL so I can select it manually. It could also be “fu…

Thanks Guenterm,
I have no problem to download the camera / lens combination that I have. I can do that manually. The cameras and lenses combinations that I have (which include four full frame prime lenses which I have been using with APS-C Sony sensor cameras and will now be able to use with the Sony a7 I have just bought) can all be even pre-downloaded.

The thing is that if I use an adapter for the lens mount with which I have to use the camera in Manual or A mode and to focus in manual, the camera does not recognize which lens I am using. It will not be written in the EXIF data. The camera I am using and other data is registered, but not which lens nor the focal length used.

If I open a raw file in PhotoLab from a shot taken as described, PhotoLab will recognize the camera but not the lens used. The lens will be in the list of the lenses already downloaded, but the program will not recognize that it is it, and will not do any correction.

If using a prime lens, the focal distance is fixed, so if the program knew which lens was used, the focal length used maybe wouldn’t matter because there is only one possible set of corrections (just for the one focal length of a given lens).

That is the reason for which I dreamed of the possibility of being able to tell the program (when it does not recognize which lens was used), which was the lens used.

Not my case, but there are also lots of adapters (with no electric contacts, just for Manual mode) being sold to allow to mount vintage lenses to Sony E mount cameras, so maybe others might be interested in being able to do what I am saying.

Thank you Egregious (Greg), Yes, that’s it. I have just voted in favour of the “Option to manually select a lens-profile” wish.

Dear @Alejandro,
thanks a lot for the detailed description…every day learning new stuff

Thank you Guenterm for your comment, very kind and polite, specially because you probably already knew the stuff I mentioned, though perhaps not necessarily everything that concerns Sony’s lenses mount systems if you are not a Sony’s camera user.

Sony absorbed Konica/Minolta in 2005/2006, and adopted for their DSLR cameras the Minolta AF mount. Therefore, all AF Minolta lenses (the ones made from 1985 and onward) could (can) be used on those DSLR Sony cameras, plus the ones made by Sony itself and by others for their cameras (Zeiss, Tamron, Tokina, etc…). But when Sony began to make mirrorless (SLT) cameras, they changed the lens mount to the system they called E.

This E mount system accepts lenses made for this mount, but also almost any lens if using an adapter with which the focal length of the lens will be the same (will not be affected nor changed), not needing the adapter any glass (just the correct mount and lenght). Sony sells adapters (which have all the needed electric circuits) that allow to use AF Minolta lenses (or any lens which was made for the Minolta AF mount system), and that allow the new SLT Sonyy cameras to recognize the lens being used and to keep all functions (including Automatic Focusing). These adapters are quite expensive and for the time being, are not being sold in my country.

But there are also three party adapters with no electric contacts, with just a ring to allow controlling the Aperture. Focusing ought to be done manually. These cost at least a tenth of the Sony ones. There are this kind of manual adapters for the Minolta AF mount, but also for the Minolta MD mount (prior to 1985), for some vintage lenses, for Nikon F lenses, Canon lenses, etc…

I have checked that PhotoLab allows me to download the profiles for the combination of the Sony a7 camera that I have just bought with any of the Minolta or Sony lenses (AF mount) that I have. If I were able to buy a Sony adapter (LA-EA3, 4 or the new LA-EA5 adapter), the exif data of a shot would include the information of which lens was used and at which focal length was the picture taken, so PhotoLab would make the due corrections. But if using a simple and manual adapter, what lens was used will not be recognized because the data is simply not there.