How to set multiple filters in image browser?

Is it possible to set several filters in the Image browser without having to call up the filter set again and again?

I have hidden rejected images by default (red). if I want to delete the rejected images, i first have to switch off grey and then green and then switch on the red marker, i.e. call up filter 3x and click. After that all the way back. Not a good workflow at all!

Is it really not working or am I just doing something wrong? If it does not work, urgent feature request! 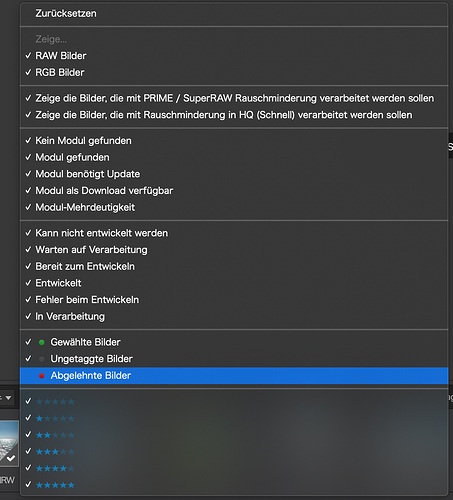 Hi there,
Thanks for your feedback!
As you have pointed out, this menu has a lot of room for improvements.
I have GOOD news for you: we are aware of it.
Want even BETTER news? It’s in the backlog and planned for a future release.

While you’re working on the filters, recently I tried to print a large amount of select photos but I had PRIME noise filtering enabled for them all unnecessarily. It was taking forever to export them all and I was in kind of a rush. I wanted to select all of the files which were presently in the export queue and then abort all of those queued photos, and then remove the PRIME filter, and then export all of those selected photos. I wasn’t successful. I’ve wanted to do this with less photos in the queue in the past but did it manually since there weren’t very many in the queue. But I don’t believe there’s any way to single out and select only photos I’ve previously edited so that I can export only those. Is there a way to do that presently?

In the first case, there isn’t an option for that (and by the way it wouldn’t be that useful because as soon as you apply a correction on an image it will be marked as “edited”, but it doesn’t mean that you’re done with it yet…).
For the second scenario, in the filtering menu just select “Processed” to filter out all of your (already) exported images.

PS/ for the first scenario you could use the pick&reject or rate your pictures (for example for me 5 stars means “edit done, ready to export”)…In this case you would be able to filter them out easily.

I thought @ukg was asking about creating a filter preset which allows you to check a certain filter name it " workflow filter" and an other named “export filter” and a third named " rejected filter"
So you only have to tick one of the three and the preferencelist is set to your requirement.
(rejectfilter would be all marked red and modul errors for instance.)

My casual workflow is… look through a bunch of shots, perhaps star to rate a bunch that are in the running for export (but I don’t always star them when it’s obvious I’ll use them), once starred I go back and review the similar starred shots so that I can choose my final top choice(s), then export each top choice right after it gets edited.

My custom preset that I apply to all photos as a starting point includes setting Prime noise filtering (since the added time generally hasn’t been much of an issue, and it reduces jpg file size). I shoot a lot of wildlife & nature and often crop significantly – and after cropping, the export with Prime doesn’t take so long usually.

Anyway, I usually don’t edit any photos that I haven’t already chosen to be the finals. And I export each one as soon as I’m done editing it. The problem was that I edited a bunch much quicker than they could be exported and had to wait a considerable amount of time or else if I cancelled the queue, I’d have to locate all the photos manually that I had worked on.

I saw the topic of this thread shortly after my dilemma and saw that you were thinking of improving the filter, so I mentioned my case thinking you might consider a filter which might help – e.g. allow selection of only photos which have been adjusted. If a few had been adjusted that I had decided to reject after all, at least the majority selected would be the keepers (I’d deselect the rejects from the selection – if I’m able to see which ones those are). I do realize that if I had starred the final choices (usually an unnecessary step for me) then I could have cancelled the queue and re-exported easily.

I’ve written a Visual Basic for Applications macro (which runs in Excel) that goes through my photo folders and deletes every RAW photo and .dop sidecar file which doesn’t have a JPG file of the same name (comparing first 8 characters since my camera creates 8 character filenames). I run that when I want to recover disk space. So I don’t need to tag photos for the purpose of keeping/rejecting them. If I don’t export a photo to jpg while I’m working on a new batch, then I’ll probably never do it later – it’s a reject even if it’s decent.

I went to the filter when the export queue was large and slow in the hopes of selecting everything in the export queue so that I could make changes to those photos only. I know that ability would be of limited use. But, alternatively, if I could have selected only the photos I had worked on, turned off Prime, and re-exported them all, it would have been significantly quicker than waiting for my queue to export.

I’m sure there are lots of recommendations that can be made for workflow methods which would have allowed me to re-select my final choices easier, but I generally don’t have to concern myself with formal workflows (aside from applying the preset I created, then tweak as needed, then export).

I’m not asking for a solution (unless a simple one already exists without pre-tagging/star_rating). Just sending you feedback in case it helps in some way. I really enjoy using PhotoLab.

I would like to have the possibility to filter already edited photos.
Even if some are not finished or will never be exported, it is still good to see which were already edited.
Maybe I should formulate a feature request.

@OXiDant no, that wasn’t the initial idea. I just wanted to speed up the way to de/select more than one filter. But I like your idea of have a preset of filter like “green with more than 3 stars” etc. to reuse it.