I have read the GPU acceleration spreadsheet kindly provided to me by a forum member.
I struggle to interpret the results though.
I have PL 6.1 on an older I5-4670 16M RAM computer with SSD system disc and regular disc for the images. Deepprime XD takes 290 seconds to export for a 20Mpixel Image. The small preview window alone takes 21 seconds to update. Although I am aware of the batch facility, this slow response sort of takes away the fun of editing. I am thinking of buying an RTX3060 or RTX3060 Ti graphics card to improve this, but I am worried that there are other bottlenecks in my system which will prevent full benefit of the GPU. I am aware of that I could buy a completely new computer as well (money is not the issue), but I would like to avoid the hassle of reinstalling all my programs if I can.
Do I need to up the RAM to 32 MB as well?
Would replacing the disc for the images to SSD as well help?
What kind of speedup should I expect for such an old system?

I appreciate any feedback I can get from you forum members.

Upgrading the GPU can improve the performance, but if bandwidths are low, the improvement will be less than if bandwidths were higher. Hard to tell what the benefits will be on your system. If money is no issue, simply get the new card and see what it does… Maybe not the most ecological approach though.

Upgrading resources in one corner can shift the bottleneck to somewhere else. With your new card, the bottleneck might be the CPU or the RAM, and you’ll be able to check that with the system monitor. If better GPU and more RAM don’t help, the channels might be the bottleneck…which means that some of your money might have been spent in vain.

hello, to give you an example if it can help you my starting configuration was a Ryzen 5900x with 32gb of ram, the photos are on a classic hard drive my graphics card an NVIDIA T600, Deepprime Xd took me 180 seconds. I switched to an NVIDIA 3060 Ti graphics card, the processing time increased to 8 seconds per photo in 33 Mpixel. hoping this can give you an idea of ​​the time saved.

Thank’s for your replies,
Currently I have no graphics card at all. Using Intel motherboard graphics.
My computer currently does not occupy any PCI slots so the 16-lane gen3 slot should be free to occupy all lanes.
Whether 3060 or 3060 TI is best for DXO I’m not sure.
There will be no money spent in vain since if there are other severe bottlenecks, I will probably bite the bullet and invest in a new computer and use the card there.
Regards
MrHAL

A 3060 or 3060 Ti will offer a mindblowing improvement. I have added a 3070 on a 7 years old PC, and it has made a HUGE difference compared to the situation I had before.

Concerning SSD vs traditional HDD. I keep the images on the SSD while I am working on them in Photolab, and then I move the RAW files and exported JPEGs to a traditional HDD at the end of processing.

And finally about RAM: I have never seen an occupation of more than 12 Gigabytes with Photolab (and other background stuff) in use, so you are fine with 16. 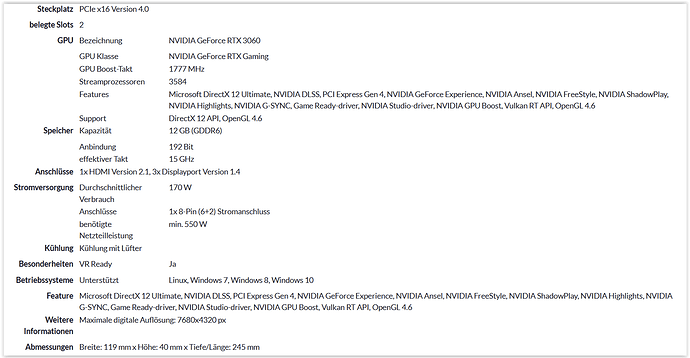 I have no idea, if that works, otherwise I might have decided so.

I am using my 3070 on a PCIe x16 3.0 motherboard with no problems whatsoever. PCI version 4.0 is relatively new, so that specification means that the GPU can exploit it… not that it necessarily needs it.

If it can help you I found an article that talks about the backward compatibility between PCI 3.0 and PCI 4.0:

From what I understand it will be the performance of the GPU which will not be optimal but it will work all the same, on the other hand I cannot tell you if it will make the GPU work at maximum for Dxo photolabs.

If it can help you …

Thank you for the explaining article!

Thank’s all for your input.

I can now happily report that after installing the 3060 Ti, my export time using Deepprime XD went down from previously 290 seconds down to 18 seconds!
On top of that, a test moving the location of the Raw image from the regular hardDrive to my system SSD drive shaved off even more time down to 10 seconds!
Since I am now at 86% full on my 2TB hardDrive for the images, I will soon need to replace this drive anyway, and from this result it seems that the replacement should be a larger SSD drive.

I can now happily report that after installing the 3060 Ti …

No, I have not upgraded the power supply or changed any cooling.
My current 500W power supply has 400W+ output on the 12V cables, and nothing else is connected to these cables (max power of the 3060Ti is stated as 200W).
I don’t know which voltage the motherboard uses. One SSD, and two HDD (+ one DVD drive I rarely if ever use), I think uses 5 or 3.3V.
I only use one HDMI output (1 screen only), and so far I have not heard the 3060Ti spin up it’s fans louder than the default idle startup level.
I have however not batch processed files through the 3060Ti yet, and time will tell if this will tip power over the limit.
I do however not game, and probably never will, so I am currently betting my current power supply will suffice.
Regards
MrHAL