I notice a considerable difference between the same raw file processed in FP6 and in PL5. (with the same settings in both). The biggest one the the grain: in FP6 it’s very prominent, but in PL5 not very impressive (hardly visible, to be honest). I double checked all the settings, but they are identical. PL5 renders much sharper images as well. (Fujifilm .raf files on Windows). Is this as it’s supposed to be?

Dirk, do you want to upload your raf-file (or via PM) to test ?
My very first DSLR was a Fuji S3Pro, which is not supported btw.

FP6 is integrated in PL5, isn’t it supposed to be exactly the same thing, hosted or standalone?

Dirk, do you want to upload your raf-file (or via PM) to test ?

Will do, tomorrow morning! Thanks for caring

FP6 is integrated in PL5, isn’t it supposed to be exactly the same thing, hosted or standalone?

The difference is that, in PL5, FP6 also plays directly with RAW files and DeepPRIME at the same time to give incredibly beautiful results. Using it standalone means you would have to deal with noise reduction separately using something like TIFF files.

OK, that’s what I thought. I shouldn’t get such different results then.

yep like Joanna said.
even though you run a RAW with PL, it still run camera rendering and adjust grain and other setting to your camera from DxO parameter. maybe you can turn off some adjustment so you can get the same results. by using FP stand alone there’s no camera correction and noise reduction.
that’s funny I never ran it stand alone for a long time and just tried it, you can load a raw file into it and it was requesting full access control to my computer, that’s weird DxO. 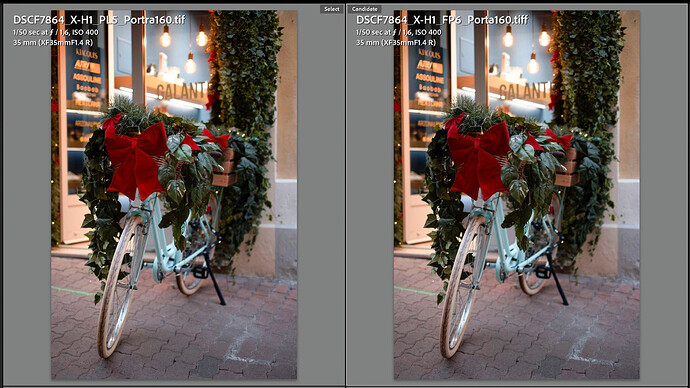 Here’s a comparison between FP6 (right) and PL5 left). hopefully the difference is visible, I assigned the correct icc because this is a screenshot of a wide gamut screen and screenshots are not colormanaged. The difference in the reds is very noticable. These are Fuji raw files, opened directly in boths apps, and exported using ONLY the film sim with the corresponding grain, settings at default 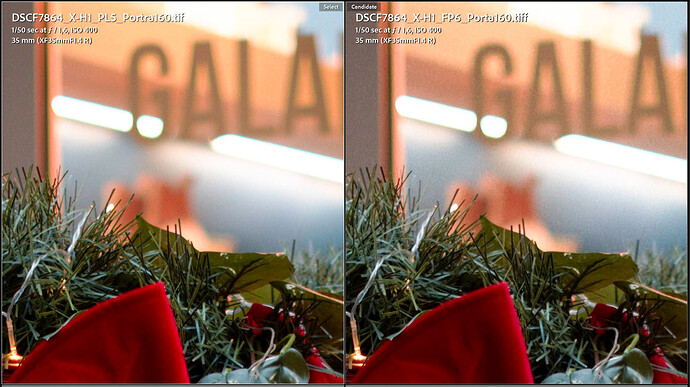 In this one, we can clearly see the difference in grain rendering. This is at 100%. It’s safe to say that the grain in PL5 will not show at all unless we print HUGE (these are 6000x4000 pixel files). I was just wondering if this is normal. Thanks!

(Images to be viewed at full res please) 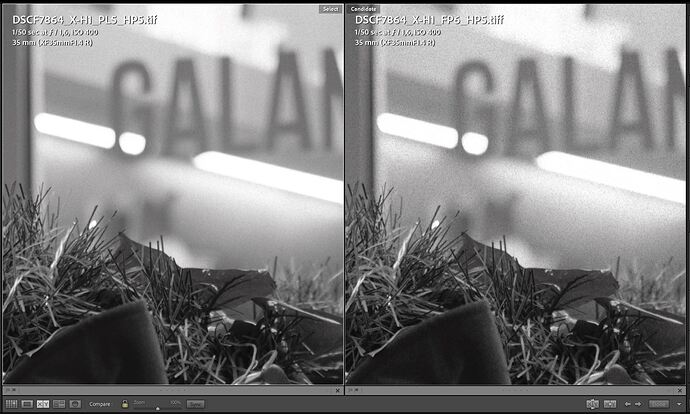 Yep, a difference even just from the first picture, seen on ipad.
More grainy from FP than PL, might be from PL parameter managing grain, which you can always increase a in the palette.
For the red and green, it’s color contrast from FP, you might be able to match with the color wheel or play with FP color palette and some local adjustment.

Not sure if you set same setting it won’t match though from PL.

More grainy from FP than PL, might be from PL parameter managing grain, which you can always increase a in the palette.

Ok, I figured it out. It’s 50% my own responsability. This is the side-effect from a bug in PL5 (and FP6) in the new Fujifilm X-Trans support, that DXO is already aware of. The software incorrectly reads Dynamic Range settings from the EXIF, resulting in underexposure when imported in DXO software. I applied a exposure correction to counteract this bug in Lightroom, after the round-trip from PL5. This exposure compensation attenuates/almost annihilates the grain effect. To avoid this, any major exposure compensation or global contrast adjustments should be applied in PL5 before exporting, not after. Seems legit…

PL and FP are two completely different tools.
one is development and the other is creative.
FP is mostly about a creative layer.

what is PL- like are the advanced contrast which is a development tool.
and vignetting control more then “strenght”
a border case is miniature effect which is a form of DoF control that’s creative ánd development.

what for me a interesting thing to know is what is the major improvement of FP6 elite against FP5 elite?

visualisation of presets? (@mwsilvers did us a great favour in creating partial presets for FP5.)
time machine? background of which film emulation is used when?
tone control? dual filter? B&W convertion preperation of colors?
creative colorcasting?

which jump you guy’s see in upgrading?

I will be away for the next few days, but updated presets for FP 6 Elite will hopefully be available sometime early next week.

Ok, I tried to find a (hopefully) noisy raw-file to see if everything is working and to compare denoising.

To not introduce individual settings with PL5, I chose Optical Corrections only and tried the different denoising options

and compared with the ‘flat’ output from FP6, only Denoise activated.
– That is, I did not check any film and/or grain simulation.

Started with the Fuji-file, but realized (after different trials), that while PL’s optical corrections worked, there was none in FP6, which also led to some differences in brightness. With that I skipped further experiments with the raf-file.

And as @Joanna already said, FP6’s output needs separate denoising, I applied Nik DFine in automatic mode to denoise the (equivalent) PL HQ output – resulting in a comparably ‘noisefree’ rendition, but visibly softer than those from the much younger algorithms Prime and DeepPrime.

i just purchased Filmpack v6 elite and integrated in PL “timemachine” isn’t that funlooking in PL as standalone.
There is a preset chapter named " DxO Filmpack timemachine 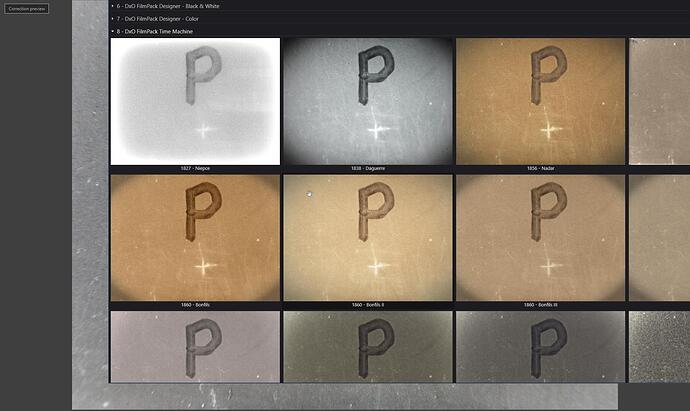 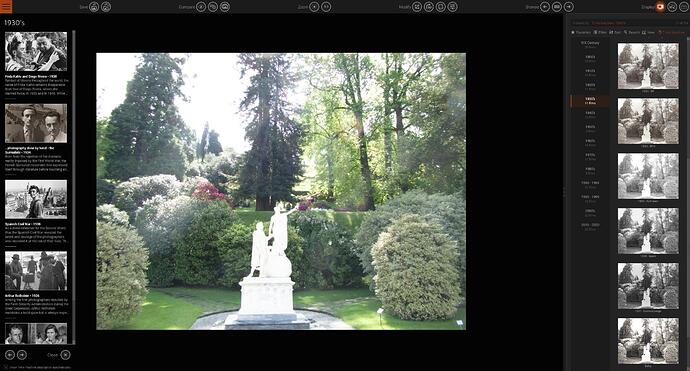 @StevenL i don’t know if your in the taskforce of UI Filmpackv6 integration in plv5 but would it be a big problem if you create a palette tool in filmpack palette called “Time Machine” which opens the same feature?
And in preset mode is it just take a thumbnail by selecting and your done.
Now it are just “thumbnails” of the rendering but if you add some history of purpose to it you could get some extra’s.
The function “time machine” could be a sub window which “shows” the DxO-preset more dedicated in its power with information and such.

Started with the Fuji-file, but realized (after different trials), that while PL’s optical corrections worked, there was none in FP6, which also led to some differences in brightness. With that I skipped further experiments with the raf-file.

the missing camera profile is now available in FP 6.1