I have one basic folder called pictures. The subfolders follows the name convention “yyyy mm description”.
Every time I put some pictures in folders, opening DXO and choose one of the new folders the thumbnails appears picture after picture after… and there are two round arrows moving within the thumbnail picture.
In my basic setting I’ve selected “no settings for RAW and RGB Pictures”.
Working in the first new folder after DXO has finished whatever it does works fine, but after selecting the second new folder it take again some time
So my questions are.

Any ideas or infos welcome

Whatever the preview jpeg in your raw files is, DPL will calculate a new thumbnail/preview. Even “no correction” does something - every raw converter does things according to what it considers to be “normal” or “no correction” - and this takes time and processing power.

#platypus Thank’s for demistify the process, but in my opinion all programs will calculate previews. So why are LR, darktable, Rawtherapee eg. are so much faster?
I’ve tested a lot of programs the last months and DPL are slowest on my machine. I like the tools and workflows within DPL but speed is not the strength.
Maybe I will put point 2 of my question at the request list " opening DPL and calculate all new folders in the background"
Thank you

We are aware that our Filmstrip is longer in loading in comparison with some other applications. @platypus is correct that it’s not a naked load but needs some calculation. But the good news is that we are going to devote some time to investigation and optimization of the FS loading. We’ll do our best.

@all
sounds good for the future and as user of DXO since DxO Optics Pro Standard 7.2

i can wait.
Maybe I’m impatient, because I’ve a lot of time to photograph and develop at the moment

Filmstrip is longer in loading in comparison with some other applications

…just did a series of tests with DPL v2 and v3, both give me comparable results.

No other app was launched by me during the tests.
Started with DB and Cache files deleted and (app) settings set to “No Correction”.
Mostly, progress follows the sort order but sometimes, an image is left out and rendered last. Inverting sort order to and fro sets rendering order equal to sort order.

Compare with Lightroom: Applying a b/w preset takes less than 10 seconds, ctrl-z to previous is less than 1 second while DPL seems to re-render (which takes 20 seconds) instead of grabbing from the cache.

I’ve tested a lot of programs the last months and DPL are slowest on my machine. I like the tools and workflows within DPL but speed is not the strength.

Why not? For sure I don’t use PL for culling, but loading even a collection of 1k holiday photos takes way too much time. Should not be too difficult to speed browsing up - just take a look a Rawtherapee’s sources

loading even a collection of 1k holiday photos takes way too much time.

The Fotothek or filmstrip is for browsing / selecting images, so the thumbnails have to be loaded - otherwise I don’t need a filmstrip. Yes, I could split the images in more folders, but that’s even more awkward.

My folder structure is purely based for storage. I do NOT do any DAM-activity on that structure. Keywording, projects, tagging, geo-tagging is all done in the DAM software.

All of he the above means I have thousands of files in any given year in specific folder for a year - 11000 in one year is my record.

After an i.e trekking trip etc… I come back with maybe around 2500 “keepers”

I already was afraid to be the only one with so many “keepers” (not all of them probably won’t be keepers 6 months later, though).
Photos are organized in folders, too, I name them like this: [year][underscore][month]optional:[underscore][Event]

(The forum interprets underscores as format qualifiers, I have learned now btw)

Hi folks,
as TO i would like to make some statements, so we don’t drift into comparing apples with pears

, or drift into a bit fucking solution.
I know that there will be faster machines, faster picture browsers faster operating systems and so on. I don’t like to use several programs for splitting my workflow. And as Svetlana wrote there ar some bottlenecks in speed. And John I know tools like Irfanview, XN View and others but I only use them für batch renaming, or showing shows to my friends after used DXO for optimize and develope pictures.
Most of the things I will do in DXO

So in my mind we can trust to the DXO developers bringing all their brain to speed up the filmstrip, or using parallel and background processes in the near future.

I have a folder where all incoming pictures are imported first and I’m distributing them after I adjusted them. So roundabout 9k pictures ALWAYS in that folder. And if I’m opening PL for any of those instead of LR (which doesn’t have any problems whatsoever), PL will just keep on doing unknowns stuff and I can basically never do anything with it, when the picture is in that folder . So I’m using PL quite rarely even though it’s my favourite picture processing program (better than LR and and better than Aperture, although not in all aspects, even excluding the performance issue).

Dear Ioan, thanks for the response because that’s the next mystery I noticed the last days. After starting the thread february 13th I have been choosen all my folders, waiting PL was ready with indexing and whatever it does. This took a while but it’s ok. Today I want to work within my Ballenstedt/Beelitz photos (rotten places in Germany) and PL shows first pictures, but a row of them stands wit “Load. Please wait”, or nothing at the thumbnail frame. It took’s a few seconds until all thumbnails were shown. And that are two folders are often used before. The secret of PL continues:orangutan:

That’s only supplementing to my thread. 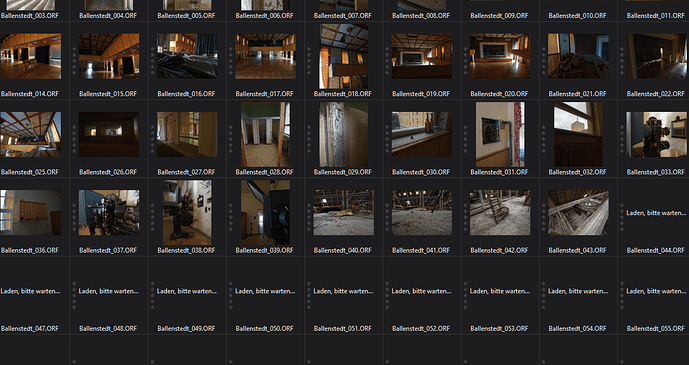 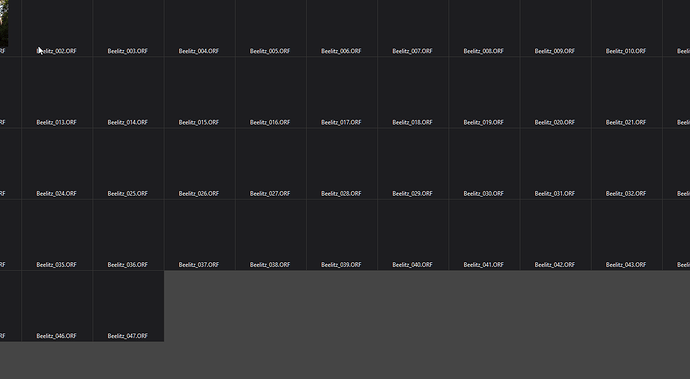 It’s interesting to see people talk about how many “keepers” they have, and even as a function of time.

But then I don’t have quite the numbers of photos that some here have. I went on a two week holiday last April and came back with 772 which are the only photos I took that month (I have monthly folders). Then again, in January 2020 I have 522 photos and 501 of those were taken in the space of a few hours one day.

The reason I keep everything is hinted at above — I’ve never met anyone who doesn’t change their mind over time as to what is worth keeping. Most often you hear about deleting more photos as time passes, but what about those photos you delete now and maybe later you wouldn’t have? After switching to PhotoLab I’ve been so impressed by the quality I’m getting I went back and reprocessed 100 images from 5 years ago … and picked 16 further photos from that event to publish for the first time.

And then there is the history aspect. What if you take a slightly blurry photo of someone that’s not a “keeper” but it turns out to be the last photo ever taken of them? You know when someone dies in tragic circumstances and the photo you see of them in the media is blurry and crooked? People who aren’t serious photographers don’t even think about deleting photos, and it’s just as well. You might think “ah, but these 10 photos are basically identical, so I only need to keep one” but are they? Maybe in one shot there is something in the background that has a significance only discovered later.

Finally… disk is cheap. It’s relative, sure, but it’s cheaper than it has ever been. Unless you are taking hundreds of photos every day, it shouldn’t be that expensive to keep them all. I have over 38,000 photos stretching back 16 years, have been shooting exclusively in RAW for 9 of those years, and it’s just over half a terabyte.

So yes, I would like PhotoLab to be snappy when viewing lots of photographs.

I have the same rate when taking large format film pictures.

The only difference is, I work out what I really want to photograph, arrange the taking position and composition, take exposure readings to ensure that the dynamic range is not too much for the film (slide film only has 5 stops), add graduated filters to bring brighter areas into range and, finally press the shutter.

Result - 1 transparency or negative, which I develop and scan.

If everything is not right, I don’t take the picture. Here’s one that took five return trips of 230km before I pressed the shutter…

So we discuss different types of taking photographs. I’m between Zkarj’s and Joanna’s philosophy.
Visiting rotten places you have to take as many photos as you can in time. Visiting the place weeks or months later you will not find the same place, light situation eg.
Back at home I have favourites and also photos I can delete without thinking about. And yes there are also some photos, I will keep, because like Zkarj says Raw developers will be better in Time. During Nikon time I have had photos Nikon Capture did not develop fine. Years later with DXO I noticed much better results in very light areas. So I think I am an 70% keeper, but for example my Beelitz folder has 380 photos and Ballenstedt about 500.

And many thanks for discussion, I like to hear about other peoples work and workflow 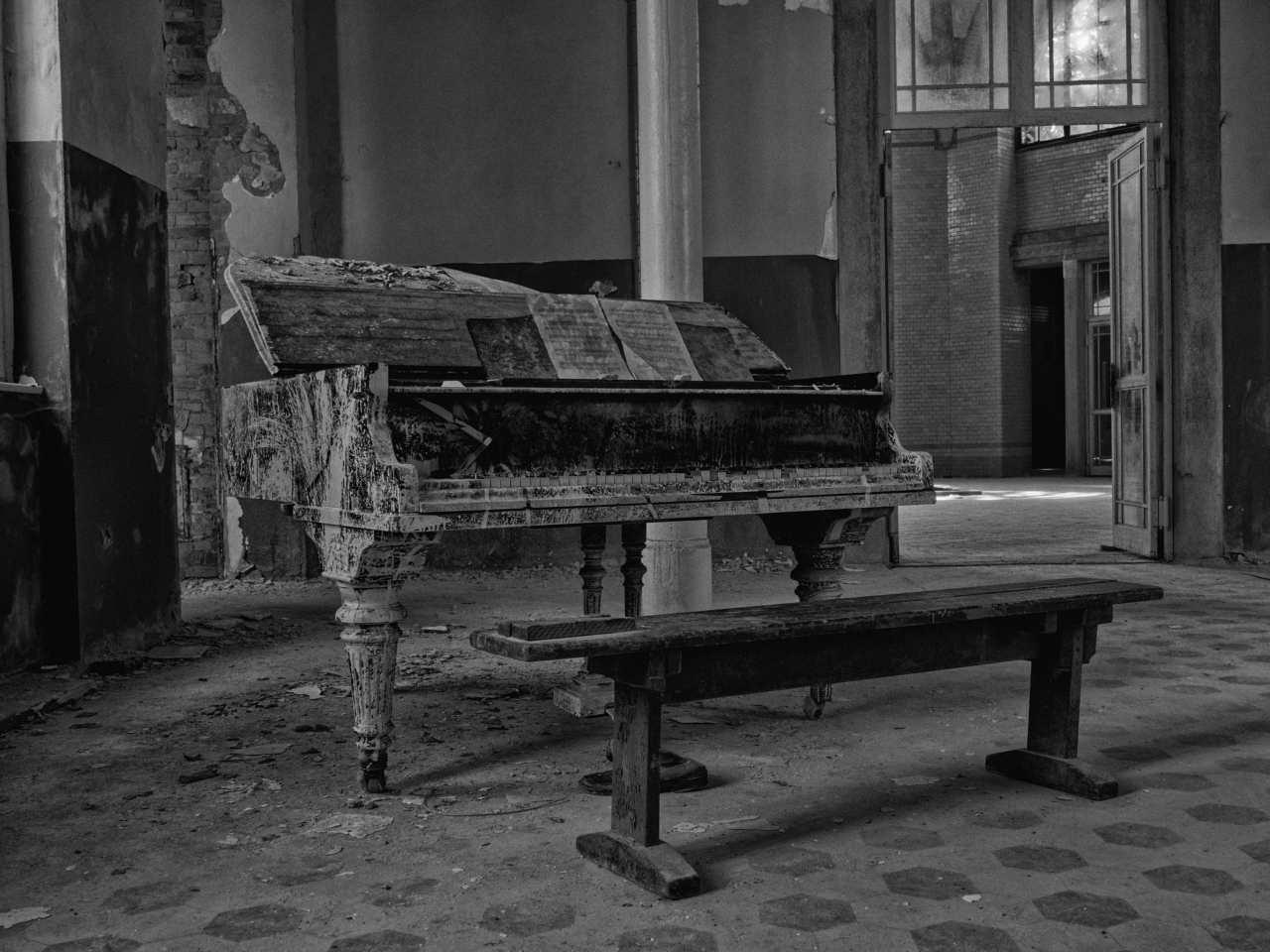 Dilapidation is one of my favourite genre’s. Thanks for the photo Guenterm.

You are welcome…first I’ve to look what dilapidation means