I came across a problem I had not had before, or perhaps not realised I had before.

I was processing some photos with quite different topics and on export using my usual preset for Flickr, I noticed some of the shots were way too sharp, but not others. It came down to the subject. Grass and foliage was so sharp as to be able to count the blades of grass, which was undesirable, whereas a picture of a train had nice crisp lines as I like.

I fixed the foliage shots by re-exporting using the Bicubic sharpening instead of my usual Bicubic Sharper. So it’s an easy fix, except this once again means I need to have two export presets and to carefully choose which shots I export with which one. This is not a great workflow. I’d rather be able to control while processing which sharpening algorithm will be used.

I had a similar workflow problem with dimensions, where I wanted 3200 pixel long edge images unless they were square. This used to mean two export runs using different presets, but I solved it by having one preset with a megapixel count instead, meaning I don’t end up with giant square images.

Is there a way to approach this that I have no thought of? Or am I to wait for one of the various “What feature do you need?” requests?

Bicubic sharpening instead of my usual Bicubic Sharper

both bicubic makes a difference?

I just did some testing on the shot where I first noticed it.

Bicubic sharper produces the extreme issue, where both bicubic and bilinear substantially reduce it, and are barely able to be told apart from one another. I did realise I had applied additional lens sharpening on the image while doing this (unnecessarily), but returning that to zero, while improving the preview thumbnail visible in the DeepPRIME panel, did not substantially reduce the problem with bicubic sharper output which was still too sharp.

In general, the mode Bicubic sharper is used when exporting a pic to a (clearly !) smaller size. Otherwise it might be to sharp and you better stay with Bicubic.
As I have never used Bilinear I suggest to check the internet – with various explanations (and opinions).

When I was running a photoclub’s homepage and got all kind of pictures to publish, first I resized them to the final output size and then applied Nik Output Sharpener in Adaptive mode, if necessary. 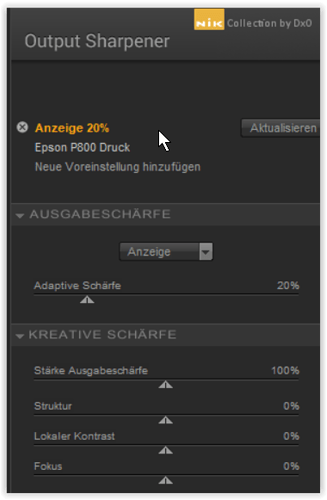 For best results, there is NO one click button.

For best results, there is NO one click button.

Agreed, which is why I wish this would be settable in the Customise screen rather than (or as well as) the export window. Anything that needs per-image attention is ill suited for the export window which applies the same settings to everything.

99.99% of my exports are to a smaller size because I own a 24 megapixel camera and do not want to publish the giant images this produces. But as noted, the sharpening algorithm that’s best for these size reductions depends on the subject matter.

I need to have two export presets

Anything that needs per-image attention is ill suited for the export window which applies the same settings to everything.

To my understanding, the different modes of ‘export sharpening’ are useful to compensate (some) loss when resizing a pic.

Without individual adjustments, they are all meant for ‘batch production’.

To adjust the individual pic in Customize → Export to disk
( original folder / resizing to the final size / Bicubic )
check with sharpening in PL, Nik Output Sharpener or else … to finally export / upload to the web.

Yes, there are ways to deal with it as you have described, thanks.

I think I will just have to be vigilant and train myself to spot those that are going to be affected by this problem.

Of interest in your post, I had no idea that the Windows version can export direct to Flickr. Not that I would use that in any case, as I have additional workflow to deal with keywords after exporting from PL.