Cropping- How to crop independent of traditional ratios

I want to crop my image independently of the set aspect ratios.
How do I do that?

First, the “Which feature do you need?” category is intended to be used for new feature requests, not general questions.

Second, the answer to your question can be found in the PhotoLab User Guide.

What follows is a brief rundown…

There are several ways to have an “unconstrained” cropping box… 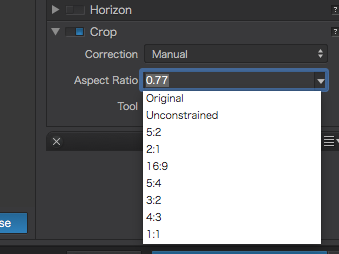 3) When the Crop tool is chosen - in the lower left of the control bar (which is just underneath the image You are working on) - select "unconstrained".

With the crop tool chosen and the crop box on your image hold down the “shift” key and start dragging one of the control points on the box. If an aspect ratio is already chosen the aspect ratio will change to “unconstrained”

Minor correction here; it should be “… hold down the Ctrl key”

PS. Jim: Your mention of the Shift-key inspired me to try it out - What I found (new to me, at least) is that if used when aspect ratio is unconstrained it nicely adjusts all boundaries at the same time.

that if used when aspect ratio is unconstrained it nicely adjusts all boundaries at the same time.

And if an aspect ratio is already set dragging with the shift key sets it to “unconstrained”… nice feature!

I am using PL v1.2.2 (Mac) but I also checked the version 2 manual which gave the same info.

No, I do not mean the “control-key” - but to make it even more interesting when I do use the “control-key” (or the cmd-key) nothing happens - it just uses the currently set mode (aspect ratio or unconstrained).

I should have ID’d myself as a Mac user - sorry Donna! It never occurred to me it would be necessary for keyboard commands - after all these years - so easy to map the same strokes to each OS.