Reference image
Full-screen mode also gives you the possibility of comparing a reference image to another version of the same image — for example, a virtual
copy that was processed differently, or an exported version with applied corrections.
Click on the arrow located on the extreme right in the toolbar, and select the image to compare from the menu.

I can’t find the arrow. Do we need to be in fullscreen mode? That makes no sense, when I’m editing I need to access the controls…

EDIT: sorry forgot: this is PL5

In fullscreen mode, there is a tiny arrow on the right bottom sight of the toolbar (the last item on the bar).

You can click it and it will show you the option to compare to a reference image!

When not in fullscreen mode you always have the possibility to compare using the toolbar on the top of the window:

on mac, keyboard shortcut is “D”
or like mmolten screenshot, where it says “Vergleichen”

Ah, forgot about the shortcut

You can click it and it will show you the option to compare to a reference image!

When not in fullscreen mode you always have the possibility to compare using the toolbar on the top of the window:

Thanks. I can only compare before/after, or select one of the previous exports. That’s not what I need. I don’t see the option to load an image from the browser. Is that even possible?

Are you trying to compare one image with another? Or a virtual copy of an image with either the master, another VC or an exported version?

Hi, I want to compare one image with another. I’ve no use of before/after. That an essential tool in my workflow especially when I’m editing series for prints

Unfortunately, that is not possible.

Ok, thank you. I didn’t find a way to softproof either. Not yet available?

No. On a Mac, I use the Colorsync Utility

I’ve no use of before/after.

Before/after is more awesome than you think. I use before/after all the time to see if I’m on the right track or how to improve an image which has gone off-track (what the final image may be missing that’s present in the RAW file).

Maybe someone else can come up with a similar workaround. On Macs, FastRawViewer 2 allows 2-up and 4-up viewing, while FastStone provides this functionality to Windows users. Both are cheap as chips and very useful. It’s possible to do a quick export of the four candidates to a folder and then review them in either FRV or FastStone. Certes, a 2-up and 4-up viewer would be a nice addition to PhotoLab as long as DxO can keep performance under control. That would mean caching full-size jpegs while going into 4-up mode and not allowing any image editing while in this preview view.

If any editing were to be allowed when in 2-up and 4-up mode, PhotoLab would grind to a creativity crashing halt.

Before/after is more awesome than you think.

Maybe, not for me, I never needed it in over a decade of editing. My “before” images are just flat raw files, nothing worth looking at. But when editing for series or prints it’s highly important to be able to have reference images. Oh well, never mind.

So, if I’ve got this right, what you want is to be able to compare two or more treated images? Would that be side by side or by switching between them?

If I ever need to do this, I will export all the processed images to a new folder and then compare those exported files. 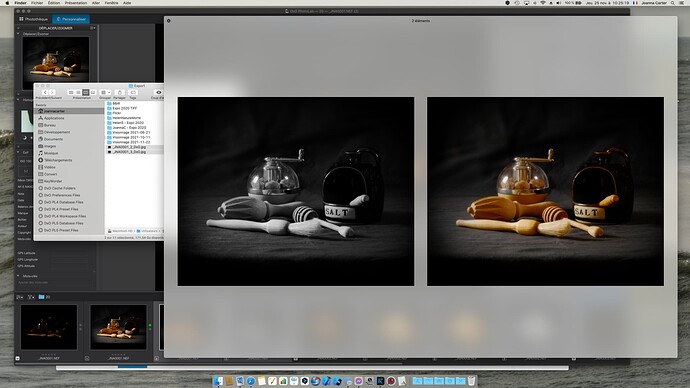 No problem, to each his/her own. I just want to be able to edit the file on the right while displaying the file on the left as a reference. That’s what I do in Lightroom, well, if we can’t in PL5 then we can’t. Of course I can compare finished, exported images in whatever viewer, but that’s not the point!

Your reference file is the original jpeg or raw file or this can be another file already processed ?
With PL you have the possibility to compare side by side the processing done and the original file.

It doesn’t give you an enormous size for the reference image but you could always try maximising the filmstrip height and use the thumbnail as a comparison source? 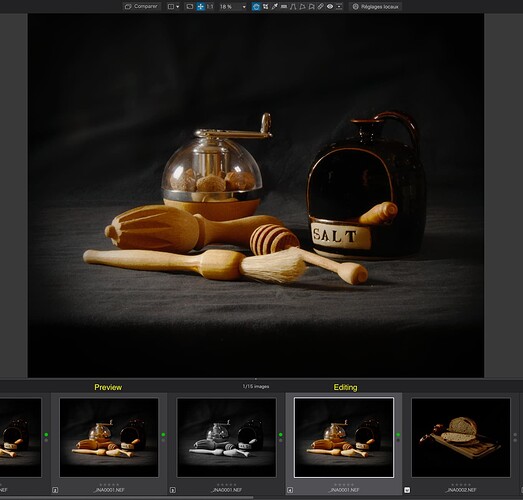 I’m trying to evaluate if I could work with a DXO-only workflow, or if I need to integrate DXO in my Adobe workflow, and if so, what would be the best way to do it. For now, there are major functionalities like these that I use on a daily basis in LR that are not present in DXO PL5 so it looks like I’m going for the second option.

I use FastStone Image Viewer 7.5.
You can compare up to 4 pics, zoom in out with the mousewheel, move around a.s.o. Very helpful. Has also other useful functions.
And with “Win+shift+right cursor key” you even can move the comparison-window to another screen. Good e.g. when you’re on a laptop.

Thank you. I know of all the available viewers, I think I have most of them installed but they serve a different purpose.

DXO could easily add afunction like that in the “Customize/Develop”-section of Photolab but isn’t the natural place for that where culling takes place, for example in a future version of PhotoLibrary that also creates extra smaller previews of that reason? If for example the photographer have sprayed 20 or 30 images per second and want to pick the best, doing so with high res previews in the developing module will not be all that effective. That’s why people use all sorts of different tools for that working with smaller and faster previews.