@Joanna I read most of the forums posts on my android phone and find that the read status only updates once you scroll right to the bottom of the post and the count of read posts equals the total number of posts in the topic. Hope that helps.

Unfortunately, this is not the case with iOS devices. A lot of the time, much of a thread never even render at all and can’t be read since all I get to see is white screen.

And you can’t apply a preset or a workaround?

Empty a cache? Restart the device? Set the device back to factory settings?

I think the main problem is, you don’t need to answer two different posts on two devices simultaneously. How else could you do so many of them and all with real profound content?

Sorry, could not resist as DxO users need to have a longing for workarounds. And I’m not on track with my posts, I just enjoy the moment. Especially that moment when the editing window acted normal again. In terms of functionality, this forum software belongs to the better ones.

OK again for me using Firefox on Win 10.

This is still a major problem for me on iPads, although my iPhone 12 seems to be better. There is no way I can keep track of what’s been read or not unless I am sat at my MacBook Pro. Which precludes me picking up on new messages when I am not in the office.

It does not depends on us unfortunately, as soon as there will be a new delivery, we’ll make the update.

Thank you. Let’s just hope this issue is properly addressed as soon as possible.

Just to let you know, I have found a workaround for the iPad issue of not keeping track of read messages.

It seems that Discourse is helping Apple sell newer iPads by not supporting older models. So, €700 poorer, I can once more read the forums.

Joanna (@joanna) a little sad particularly if the old (2013 to 2022 is not a bad run) model is still working O.K. but the problem for the software developers is the additional expense (bother) of ensuring backward compatibility.

I feel that Windows 11 is exactly what you intimated, a ploy to sell new hardware, many machines that are perfectly serviceable fail the test (and I fully understand that Microsoft has been held back in ways that Apple has not because of the huge diversity of devices that can be plugged into a PC where Apple only supports a very controlled lineage but …)

€700 (£586) would buy me a reasonable Ryzen system (without a “fancy” GPU) to replace my really aged i7-2700K “spare” (which would be cannibalised) and provide a bit more than 2 x CPU power (+ Win11 compatibility), with one i7 4790 becoming the backup/test machine and the other becoming the “spare”, just my wife to convince now!!

the problem for the software developers is the additional expense (bother) of ensuring backward compatibility.

Yeah, don’t I know it, especially when I am writing iPad and iPhone software for a broad target audience. It’s been bad enough deciding where to cutoff my Mac image browsing app - at the moment, I’ve had to choose Catalina as the earliest because the thumbnail drawing algorithms took a Gian leap in performance over Mojave.

What I object to most is the fact that, in all other respects, the old iPad Air still does everything else I want, including browsing all other websites. It is purely the Discourse upgrade that has forced my hand.

Joanna (@joanna) even as I wrote my post I did feel that there was not a real “excuse” for the Discourse software to cause the problems it has with your older iPad.

I read this topic, but lot of messages and questions/answers, so maybe I’ve not understood important information.
I use firefox on win10 and have too problems with the soo little space to write messages, which leads me to modify lot of time my messages because proofreading is difficult.

So, could you resume the situation and tell me what to expect ?
It’s not about workaround with text editor, because I use sometime this, but it’s not easy with it to have a clear view when quoting.
Just to know what to expect.

@JoPoV As standard you get a box of this size to write the post, I use Opera on Win 10 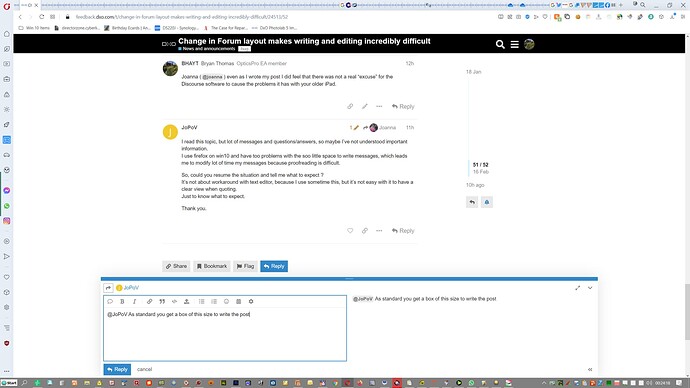 But you can open the post up to this size or even larger (but then lose easy access to the posts you might want to quote without decreasing the size)! 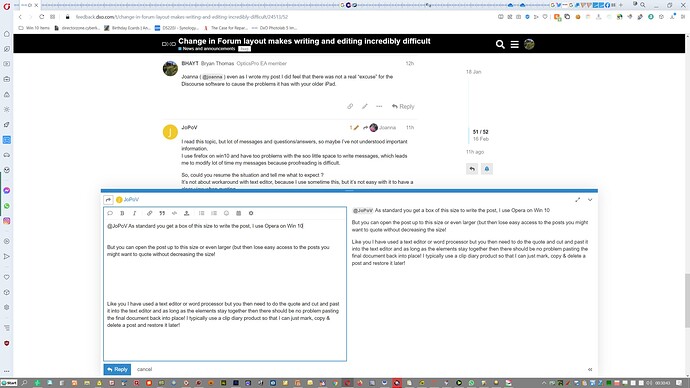 Like you I have used a text editor or word processor but you then need to do the quote and cut and past it into the text editor and as long as the elements stay together then there should be no problem pasting the final document back into place! I typically use a clip diary product so that I can just mark, copy & delete a post under development and restore it later!

And yes I do need to ‘edit’ the post to get the things right after the initial post! Sometimes many times!

But you can open the post up to this size or even larger (but then lose easy access to the posts you might want to quote without decreasing the size)!

Ho !
Just checked it. It works !
Never saw this. I must have been blind !