Volume Deformation correction is an amazing option to fix some wide angle images. But for anyone that has used it, while it corrects one kind of distortion it creates others.

I LOVE this distortion correction and I use both options.

However. There are some times where I would like to balance the correction. Can we have a slider that goes from 0% (no correction) to 100% (full correction) so we can dial in the amount of correction we want?

This is most useful if we want to balance weird/skewed faces in the corner with sometimes badly curved straight lines near the edges of the frame.

Let me adjust the level of correction so I can remove some of the skew on the corner faces while dialing an allowable amount of bend in the straight lines. Or perhaps dial it in but not so much that I lose the foot of the person off the bottom edge in the center of the frame.

Does it make sense?

Did you have a look on the right working area at the palette of ViewPoint? 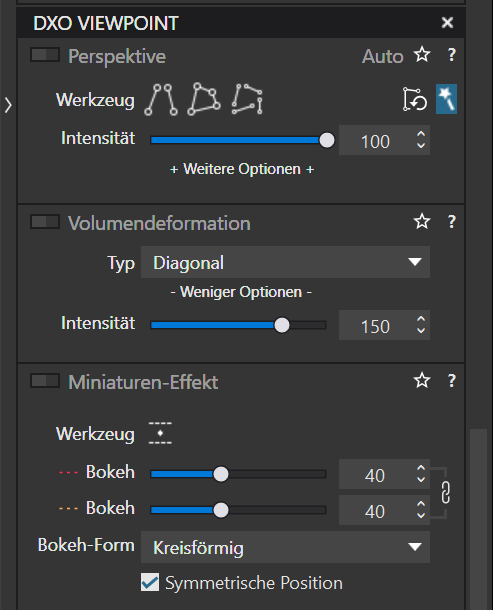 He must have viewpoint for this, I think.
I’ve got it and it works well.

I have the viewpoint license but I don’t use the standalone. I’m suggesting a slider should be added to the adjustment in Photolab.

@MikeR - There’s already an Intensity slider for each volume deformation correction - diagonal, horizontal, and vertical. I find that these sliders already allow me to balance the distortion adjustment in the way you’re describing. Just make sure that you’ve expanded the Advanced section of the Volume Deformation palette, as shown in the image above (which is from the ViewPoint section of PhotoLab, not from the standalone app). Otherwise you won’t see the Intensity sliders.

Does this solve your problem?

There’s already an Intensity slider for each volume deformation correction

Ok I feel really dumb… I never clicked the “expand” arrow to show the extra controls…
Yes that satisfies my need. I guess it was a good idea. It’s already implemented.

Sorry for the “noise”.

No worries - it’s a complicated tool with a lot to learn about. You’re smarter now, so feel smart!

Haha. Also apologies to @Ralf_Brinkmann who also had the answer and I missed it…