@George
Did you get this warning?
My picture is shown in the correct orientation in Photo Mechanic and all DxO software using the steps I described. Using the above, the orientation is still wrong in Viv3 and SEP3 (the original problem).
What are you using to view the image?

Use -n on the end. See my former examples.
If you use the commandline Exiftool and PL the change in the file is send to PL immediatly. You can see the thumbnail changing.

Thanks @George, the -n at the end does remove the warning message.

I ran the following tests, deleting the dop files and PL database in between runs.

Then I ran the same test and included removing the Nikon Capture data. I think this is what you’re seeing.

Orientation tags remain the same as before.

I then ran the steps from my post yesterday and found they didn’t work! I was deleting the dop files but was not as diligent with the database. I think a “Rotate image selection by 90°right” came into play.

So if I delete the PL database (which I don’t use) and follow the steps from my post yesterday, PL4 will show the image in the wrong orientation. I’ll then “Rotate image selection by 90°right” in PL and the orientation will be correct there as well as Viv3 and SEP3. The orientation setting will be stored in the dop file. This does not impact how Photo Mechanic displays the image; it will stay in its corrected orientation there. I’ve tested this and it works.

Whew, thanks for hanging in there with me

I think there’s something wrong with the file. 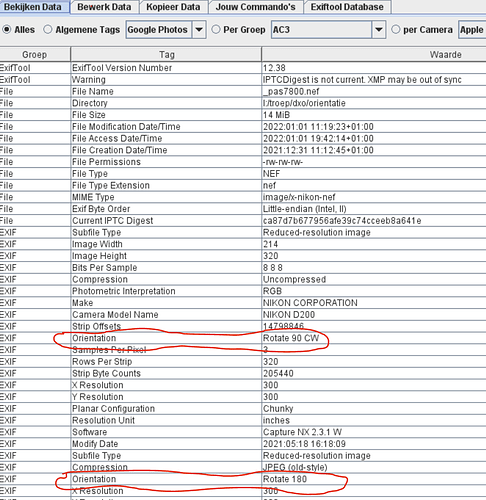 Had a look at my Canon test files, I know that yours are Nikon’s, nevertheless, each of my files contains two orientation tags, but not in the EXIF section.

A “normal” portrait oriented image typically has these entries

I think there’s something wrong with the file.

Having two different tags in the same section looks strange…

Yes, I agree with you both. The metadata appears to have been corrupted. As @Joanna pointed out earlier

Somehow, something has managed to insert 4 tags with different orientations, which is likely to confuse the heck out of all sorts of software.

Just out of curiousity I’ve been playing with this.
The exif orientation is describing the camera orientation, the other orientations should describe the correction wanted on the image.
An orientation of 270 and 270 would mean 540 or 180. That’s not portrait.

This orientation should become a portrait up side down: 90 + 0.

For some reason the jexiftoolgui gives me 2 orientation tags,90 and 180, but together they have the right value and shows right in PL5. Wrong in Irfanview.
Exiftool commandline itself gives me just 1 orientation tag.

The exif orientation is describing the camera orientation, the other orientations should describe the correction wanted on the image.
An orientation of 270 and 270 would mean 540 or 180. That’s not portrait.

When I load these images into DPL, Image 1 is rotated correctly, while I have to rotate images 2 and 3 manually, if I want them to not lie on their sides. This should mean that DPL only uses one of the rotation flags and in the case of my Canon files, this tag seems to be in the MakerNores.

Exiftool does not necessarily display all tags. I use “exiftool -G -a -u filename.ext” to look at files.

Good advise to use -G -a -u. I finally got the missing tags.

Just checked on 4 images, the D200 of Brian, and a D80, and 2 D750 of mine. All are shot in portrait. The D750 hasn’t been in touch with Nikon software, only to add keywords. I should investigate that influence.

In your example nr. 3 would be the right for a portrait.

All nef images, no jpg.