My main reason to upgrade to PL6 from PL5 would be an improvement of the already outstanding DeepPRIME with the new DeepPRIME XD. I’m on a MacBook Pro 14", M1 Max, 32 gigs of RAM, 32 graphic cores. My raw files are mainly Fujifilm X-TRANS these days; I’ve tried to look at some of these files, and the only options I have for demosaicing/denoising are HQ and DeepPRIME. Prime and DeepPRIME XD are greyed. Am I missing something or are these features not enabled for X-TRANS sensors? If so, there is a clear lack of transparency. DxO advertise X-TRANS support and DeepPRIME XD in PL6; if some restrictions apply, they should be stated up front. Has anyone been able to use DeepPRIME XD with Fujifilm X-TRANS sensors? Thanks!
Daniel

I haven’t found any product documentation or marketing information that says DeepPRIME XD isn’t supported for X-Trans sensors. I know PRIME isn’t supported but first-generation DeepPRIME is. So DxO needs to fix something. I suggest contacting support.

Thanks for your response. I shall do so.

encounter the same problem as you.

I opened a ticket with support. I’ll report back here when I hear back from them.

I just heard back from DxO Support (that was quick). They pointed me to this page of their site that I had missed:

For FujiFilm X-Trans images, the current restrictions are:

*It is planned to add DeepPRIME XD support only with a later minor update of DxO PhotoLab 6.

I guess this means I won’t upgrade for the moment. I shall wait until X-TRANS sensors are fully supported and then decide. I still feel that while the information is clearly on the DxO web site, the company could be more transparent about unsupported features. For example on the Features Page of PL6 it says

I think a link to the page showing the X-TRANS limitations wouldn’t have hurt.

DXO highlights the DeepPrime XD functionality but it is unavailable for the FUJI X-Trans ! This is the big frustration. I had already waited for 2 years between Photolab 3 and 5 to have this functionality.
It might be nice to give an idea in terms of availability.
Philippe

Fuji X-trans DeepPRIME XD support is planned for a later PhotoLab 6 update. I have no idea when that will be.

I had exactly the same issue and got and identical reply from DxO support. I think this is a misleading value proposition for Fuji X Trans users. This limitation needs to be clearly visible on the DxO website where the DeepPRIME XD feature is highlighted and not somewhere hidden in the support section.
I hope this will be fixed soon

All good points that I’m fully in agreement with and equally frustrated.
Why would a potential customer who knows the product and owns the previous version (having bought the Elite to have the Fuji compatibility) go to the FAQ when the features comparison clearly describes the Fuji compatibility?

DXO PL6 user guide using Fujifilm raf file as DeepPrime XD example. Given PL6 is not yet ready and no date of upgrade releasing, why DXO use raf file as example. It is misleading the public, isn‘t it. 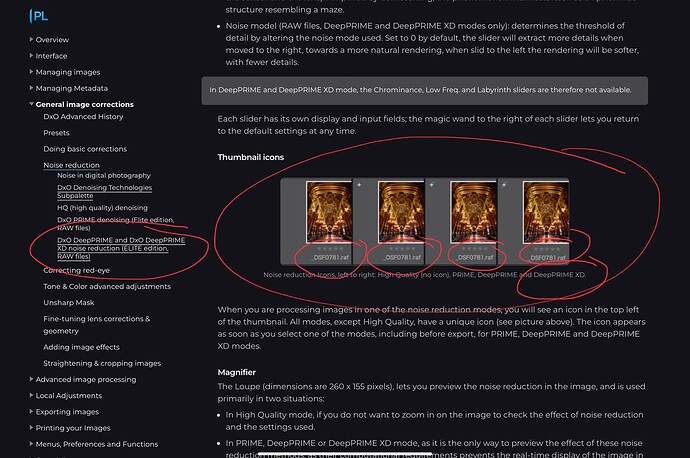 If anyone hasn’t already done so, I suggest filing a ticket with DxO Help & Support at https://support.dxo.com/hc/en-us/
Here’swhat I have filed:
How long do we have to wait for DEEPPRIME XD for Fujufilm cameras?
You have been using a Fuji .RAF file to illustrate this new feature and it does not exist yet.
Many customers are feeling cheated after buying the upgrade and then not having the DEEPPRIME XD available, expecially as this is also suggested in the Feature Comparison Table between PL5 Elite and PL6 Elite at Pourquoi mettre à jour - Comparez votre version - DxO
There are many new good features and refinements in PL6 Elite, but this looks like a step backwards, especially since the introduction of DEEPPRIME functionality for Fuji X-Trans in PL5 Elite

I did using the form to file a complaint and asking the date release of DeepPrime XD support Fujifilm RAF.

The final reply is as below.

”Our apologies, per our general sales condition, we are unable to refund activated software, especially as a fix is coming in an upcoming, free minor update.

I‘m not satisfied with the DXO support answer. Apparently, DXO don’t know when it can be fixed.

I agree with you. This is not satisfactory, though not unfamiliar behaviour among software companies, especially as DEEPPRIME XD is a named new feature and the lack of transparency towards users of one of the leading brands of digital cameras.
I hope that others will follow our example so that DxO are not allowed to ignore the rollout of the update.

I have an update to share from DxO support.
“… apologize for the confusion, and am happy to pass along your comments, however .raf files are not exclusive to X-Trans cameras, they are the RAW files for other Fuji cameras that are compatible with DeepPRIME XD. Only X-Trans Fuji cameras are not supported at this time.”

So if you’re using any other Fuji camera then DeepPRIME XD will work on its .raf files - except I happen to own a Fujifilm E900 camera and when I try to process the RAW (.RAF) files from that, PL6 Elite returns a popup saying that the model up camera is unsupported.

For info - this is part of my message that elicited the reply at the top of this post.
"…In addition to the points I made in my first message I would like to point you (and whoever you escalate this case to) at the PL6 user guide at the link below, which clearly illustrates the new icons for DeepPRIME and DeepPrime XD as applied to a Fuji RAW file (_DS0781.raf). There is no mention in that section of the user guide to indicate that the new noise reduction feature will not apply to Fuji files.
I cannot see how this, put together with the references I made in my first message, can be described as anything other than misleading to loyal, early purchasers/upgraders of the software who would expect to enjoy the full feature set as described in the version comparison.

I also note that established and respected advocates for DxO, such as Robin Whalley, were unaware of this omission to the feature set as can be seen at about 0’54” into his YouTube video at 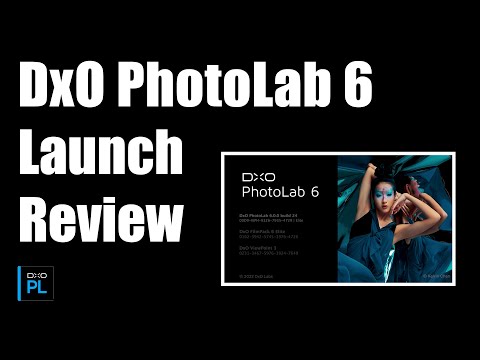 I must emphasise that the overall product remains a leader in the field, and my criticism is that DxO have rather let down loyal customers by including misleading information.
Imagine if you well, how company executives would react if the situation were reversed and the FAQ had been wrong, leading to Fuji-user customers being turned away from making purchases in the belief that the upgrade would not be worth them bothering with?"

to then find out …

oh dear, it doesn’t look good on portrait,
I don’t see anything better in landscape pics,
yes, it works with high ISO,
but I don’t crop that much
…

No, I’m not bashing XD (I really like it), but … it is a specialized tool!

Really? I absolutely love it on portraits too. For me, XD seems smart enough that I can leave it on all the time: no artefacts at low ISO, neither on portraits nor in landscape pics. And great noise reduction whenever ISO gets higher. Really, I see no adverse effects in leaving it always on, for all ISOs and all kinds of images: and on my machine (with RTX 3070) it’s MUCH faster than classic DeepPrime.

I would like to see some examples of why you don’t think it’s fit for portraits, to understand what could be improved according to your taste.

why you don’t think it’s fit for portraits

Hi Luca,
as you know, DeepPrimeXD works wonderful to suppress high ISO noise and it smoothens out of focus areas, which increases the difference between bokeh and the sharp part (in a way enhancing 3D). But I don’t like it on skin (the face in focus) giving a somewhat rough impression.

While it should work (not disturb) with strong / character portraits, I hesitate to use it on soft skin. – Not that I like this ‘plastic face’ look, but with XD I would then try to find lower settings or mask it out in PS (unfortunately not possible in PL).

In some cases, skin tones can become a bit ugly. During EA testing, I posted this image as an example 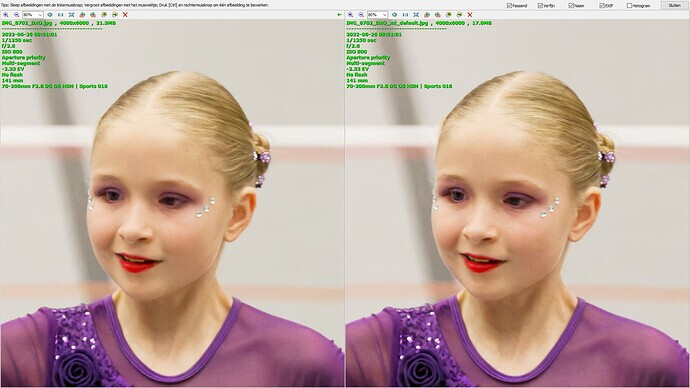 The skin tone in her neck and face becomes spotty. That was in June already, would be interesting to see if things have improved since than.

With the latest releases I see no issues in portraits, even with default settings: 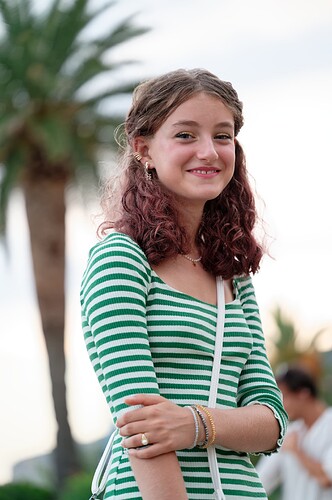 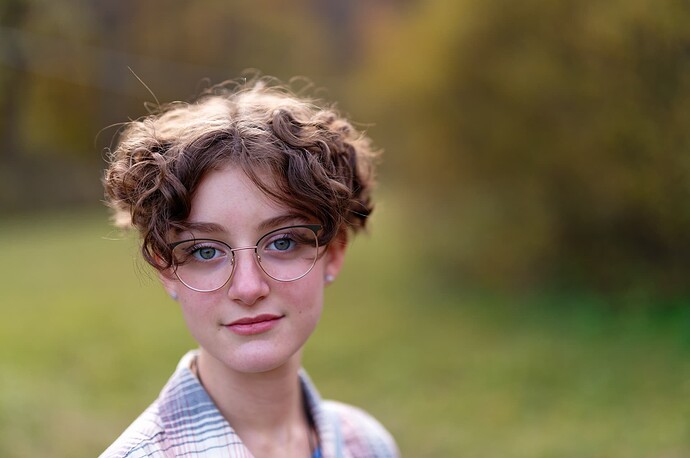