Sharing PhotoLab Workspace layouts ... with potential to learn from others

I reckon it might be helpful to see how other users have arranged their PhotoLab Workspaces.

To kick this off … here’s my custom-workspace (with test image). 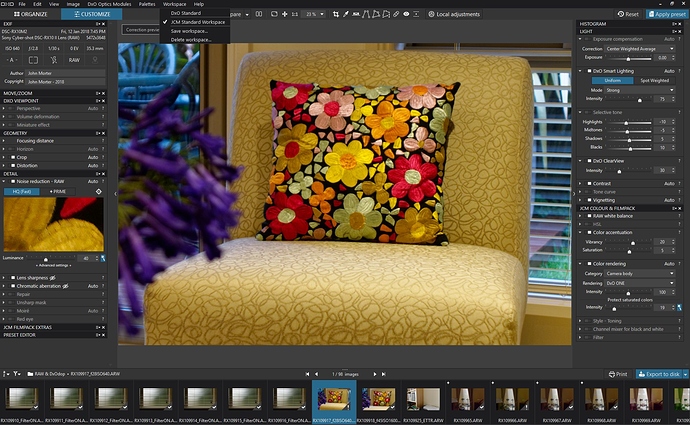 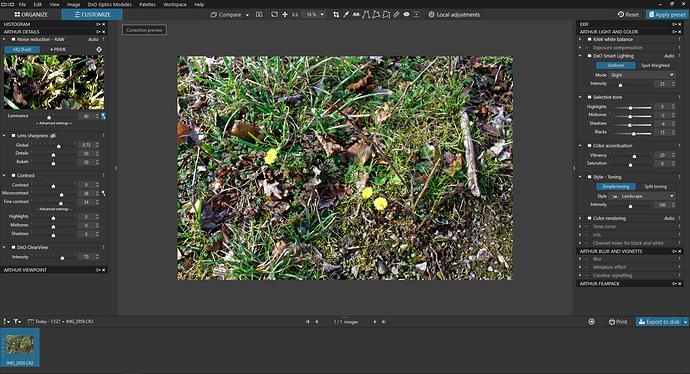 On the right side comes first the lightroom like “light and colors” palette, followed by “blur and vignette” functionality. On the left side is the palette for details including sharpness, contrast, microcontrast and noise.

All functionality, which is covered by the toolbar at the top, is removed from the palettes. Seldom used viewpoint and filmpack functionality is hidden in separate panels at the bottom.

The histogram is on the left side to have it always in view independent of the scroll position of the right side. 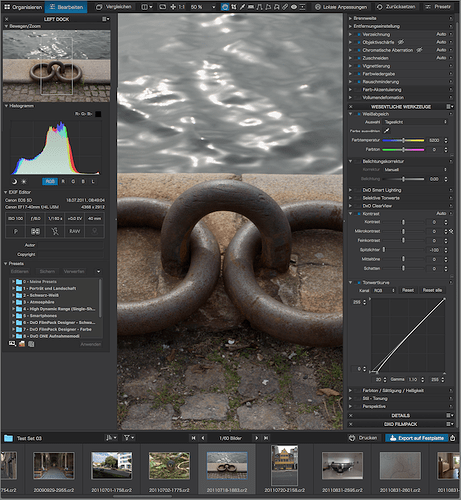 The goal of this setup is to prevent the panels from moving up and down, so I keep them out of the way or collapsed. This is some kind of workaround for the missing solo mode. Don’t like to scroll…

The righthand side is purely informational (except for the preset panel) My work starts left and then goes right from top to bottom. I rarely open the collapsed panels. I cannot leave them out tjough, because I use them occasionally. Panels reflecting tool bar items are generally left out in order to not waste space ore movement.

At times, I use an ALL-IN palette that holds all panels except for the stuff at right. I use this palette when a new version of PL brings a lot of new functions, and then only for initial first tests.

My usual workspace is attached below.

All functionality, which is covered by the toolbar at the top, is removed from the palettes. Seldom used viewpoint and filmpack functionality is hidden in separate panels at the bottom.

Yes - That’s my general approach too; but, I still need access to the “fine-tuning” features of some functions
Eg. For the various perspective tools, I like to be able to tweak the Intensity setting - which is available only from the Perspective pallette.

The histogram is on the left side to have it always in view independent of the scroll position of the right side.

Good point - I will change my layout to match this.

I like your “portrait” orientation layout … I guess you use F9/F11 to be able to see more of your image (?)

My usual workspace is attached below.

Thank you for this inclusion.

I see you also have Histogram at top left - the same as Asser … I am moving mine there too.

Yes - That’s my general approach too; but, I still need access to the “fine-tuning” features of some functions

Eg. For the various perspective tools, I like to be able to tweak the Intensity setting - which is available only from the Perspective pallette

Yes, all perspective fine tuning is done in the “Viewpoint” palette on the left bottom side: 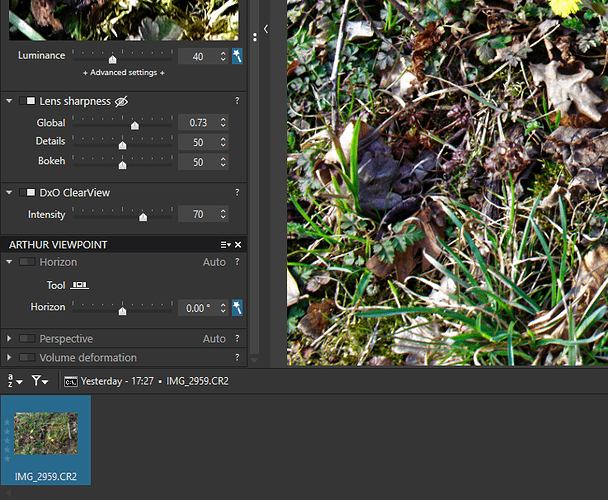 I seldom use viewpoint correction in general, except the horizon tool. What I am missing in PL is a combined crop-rotate-tool via drag-and-drop like in Lightroom, Affinity Photo, etc. With such a tool, I would expand the “Viewpoint” panel even less often.

The miniature effect I have put into the “blur and vignette” panel, because I often search it near the other blur and vignette functionality. It is not a perspective thing for me.

What I am missing in PL is a combined crop-rotate-tool via drag-and-drop like in Lightroom, Affinity Photo, etc.

That’s an interesting comment … I’ve always found the Perspective tool in PL to be MUCH better than the feature in LR. Perhaps you don’t have PL’s Crop Correction Method set to "Auto based on keystoning …" ?

I do not mean the auto functionality. Sometimes there is no horizon on the picture. In that case, I want to draw my crop bounding box, grab the image outside of the bounding box with the left mouse key and staighten it by moving the mouse up or down, until it looks good for my eye. A combined crop+straighten functionality in one. Like this: 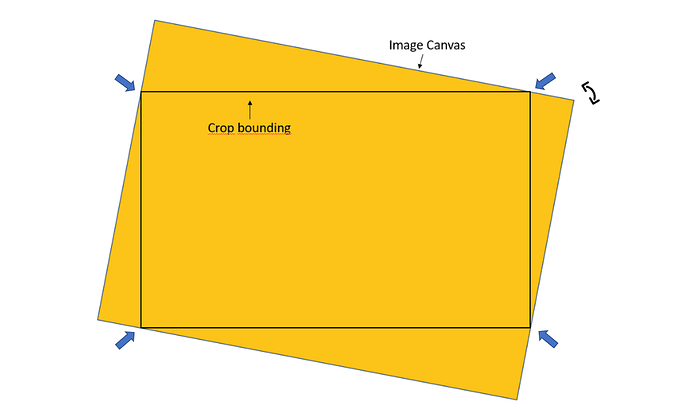 The canvas is rotated under the bounding box. The bounding box size is adapted according to the available size while keeping the aspect ratio.

Horizon and Crop are two different functions in DxO software.
And this is good

But, the bounding box functionality exist in ViewPoint Stand alone software.
We have ask for a long time its implementation in OpticPro without result

A combined crop+straighten functionality in one

It’s possible that I’m misunderstanding you - but I reckon that’s easy to do in PL.

It’s a bit different in approach to your diagram - - but with exactly the same result (so far as I can tell ?)

Am I missing something ?

Mmmm - Now I am intrigued !

See my example above (in reply to Asser); How am I misunderstanding this requirement ? 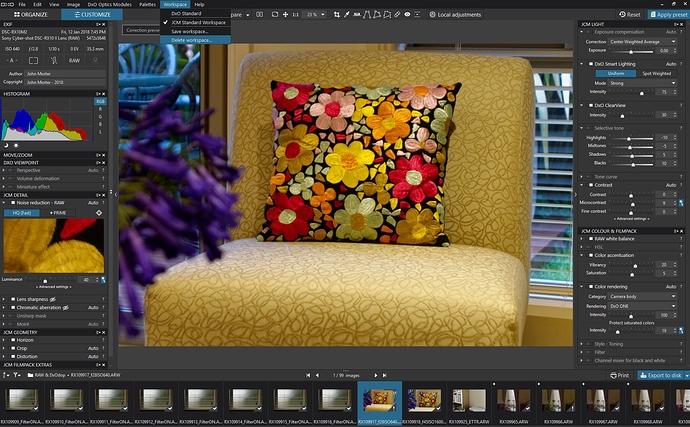 Mmmm - Now I am intrigued !

OUI bien sûr
the auto position is a prerequisite for this behavior.

I went too fast and I am not native English

Asser asks why the two functions are differentiated.
With ViewPoint stand alone it is possible to crop the straightened image by staying inside the canvas.

With ViewPoint stand alone it is possible to crop the straightened image by staying inside the canvas.

OK - Thank you for the clarification … But, how is that different to what we can achieve from within PL ?

** Is the end result not the same as I outlined above ?

** Is the end result not the same as I outlined above ?

Try it for yourself

The end result is always the same, its all about efficiency. I do not want to guess where the horizon might be multiple times. The problem with the horizon tool is that it does not deliver a live preview. I have made a video on what I mean:

It can be as easy as that. I just “rotate” until I think it might look good.

Btw: I do not want to change the horizon tool. It is perfect for its use case. I just would like to see the crop tool be extended by a drag rotate functionality as in the video. It would not disturb anybody who does not need it. But it would be handy for those who are used to it from other tools.

OK - I now understand what you mean … Thank you, @Asser

I love black and white photography. I’m in love with the possibilities offered by the DXO software. Undoubtedly, my favorite plug was NIK Silver EFX. Below is my workspace, which I use for conversion to B&W.

My work begins with the selection of a film, just like a photographer who puts a film in his camera. Then there is the light and contrast control section which is crucial for black and white photography.

The next step is the conversion of the color image into black and white. In most cases, this conversion is (amazing!) done by the film profile, which we choose first. For a larger control on the right, I created a palette that allows more precise control of color conversion process. You can change the white balance, add a lens filter, change the brightness of each tone after the conversion and apply a tonal curve.

This gives us additional control over the conversion of a color image to black and white in each of the three channels and in each of the ranges: shadows, lights and midtones.

I do first aply chanel mixer for BW, and then use curves for even more precise control, then local adjustments with control points and etc… 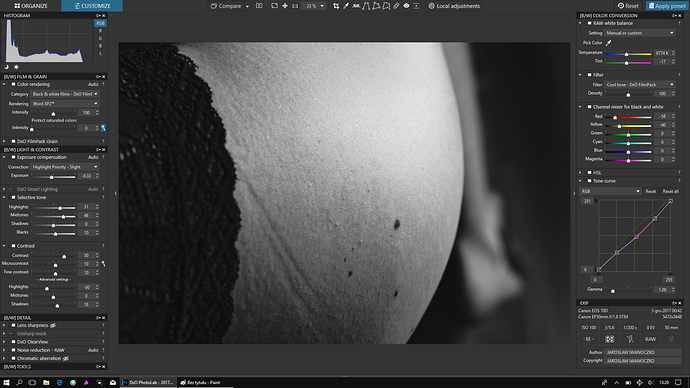 Thank you, Jaroslaw - - That’s a really interesting explanation … I will come back to this when I next try a B&W conversion.