Rotation not kept in dop’s why?

It drives me mad, using PL on a laptop and desk Windows PC the only adjustment I use, due to my phone rotating landscape to portrait is when adjusted in PL its kept in the data base. Its bad enouth not copying over with copy/paste but why on earth is it not in the dop with other corrections. I corrected it in Photo Supreme 5 that correctly reads the xmp when imported on another PC files and correctly orientates the image. I wonder how many other corrections I don’t use PL also stupidly keeps only in the data base not the dop’s?

Yes, this was brought up in some other threads also (which contain very long discussions). I believe the solution is to activate PL5’s Metadata Synchronization option in Edit > Preferences > General. The rotation info (plus ratings and keywords) will then be written from the database to a .xmp sidecar file for each RAW file. You can also use the File>Metadata menu to force-write XMP metadata to an image’s .xmp sidecar.

Thanks but using another DAM I understand the advice is to not do that to prevent DAM problems.My DAM has already the correction in the XMP it’s pL not reading that that’s one problem. It’s not sounding a very good idea to have the same information from two programs.

Then I suggest following these threads, as they discuss at great length the very issue you have brought up:

I’m working with Photolab 5.1.1 build 52 on MacOS BisSur. When rotating an image from landscape to portrait, in .dop sidecar file then occurs a line “Rotation = 3,”. When the image and the sidecar are copied to e.g. another directory or a backup drive, and then moving in PhotoLab image browser to this directory, the rotation information is lost. The image shows up in landscape again, and looking into the .dop sidecar “Rotation = 0,” shows up. This has the effect that all rotation info is …

I have noticed errors in how corrections are handled in image files that are moved outside the confines of PL5. There appear to be several related problems: 1, not every correction to an image will cause all parameters to be flushed to its sidecar, even if automatic export is on. Presumably, they are written to the DB 2, if an image is moved, its path as known in the database is lost, so PL5 will import what it sees from the associated sidecar 3, PL5 does not recognize “Rating” as a sidecar p…

Ok, so PL5 writes this information over here only into the database and not into the .dop files. As the files should indicate “green”. The .dop files gets updated but the information in question seems to allways been ignored when the file ist touched.

Thanks, basically it dops have evolved as a mess over the years and needs DxO to sort it out. As my imiges are not RAW, jpg’s, from a phone, PL, doesn’t creat a xmp to save the data to so Photo Supreme 5 must save the rotation information into the jpg as it reads this and keywords when copied but PL now not using dops doesnt do this. One other oddity is when the imiges were exported to Flickr 3 were landscape but one portrait.
A further anoyance is PL5 reads the keywords in the jpg but ignores the rotation information placed there by Photo Supreme 5.
I also find the exposure corrections are copied OK just rotation information missing in the jpgs

Why am I not suprised to be told by Photo Supreme 5 that “The issue here is that DXO writes the wrong orientation in their developed JPG files. This has been reported to them many times before.”
So they view it as a bug in PL5 so added bug to heading

I don’t use Photo Supreme, so I can’t comment on that but…

It would seem that DxO don’t use the standard xmp:Orientation tag values in DOP files - instead they use their own enumeration values of…

But, whereas the XMP tag is named “Orientation”, the value stored in the DOP file is named “Rotation”

However, regardless of whether we think of either the XMP or DOP value, what gets exported seems to be uniquely the XMP value of Horizontal (1).

Let me take the example of a RAW file, taken in portrait mode and, so, marked in the xmp:Orientation tag in the RAW file, by the camera, as Rotate 270 CW (8).

I clean the PL5 database and remove any DOP files, so forcing PL to read the orientation from the RAW file, which is does correctly.

I now rotate the image by a further 90° in PL, so it now shows as an upside-down portrait oriented image…

Exporting the, now, inverted image gives an orientation of Horizontal (1), which might match the DOP file, but not much else.

Is it any wonder other software gets confused?

Unless, because the exported file is “brand new”, DxO considers it as having no rotation in relation to the orientation at which DxO exported it. Now I’m even more confused

In jpg it can’t even read it’s own settings when copied and according to Hert at Photo Supreme DxO have been told about this problem a number of times and ignored it.

I think you are going to have to be very precise and give us a step by step description ion what you are doing.

I (and @platypus) have both tested this exhaustively and can’t find what we think you are describing. But we are not sure if we understand the exact nature of the problem.

One thing I would say is that an exported files will always have the default un-rotated setting because it is a brand new file and would not be expected to contain the orientation or rotation of the original file.

Copy jpg from one pc to another maintaing exaxt file order so PL5 has all exactly as on the original. PL opens with all settings and keywordsy. But no rotation, as far as I can see RAW are OK but I rotate few of them. The JPGs have to rotated again but no further editing has to be done. Key words are added by other DSM where they are also rotated but this rotation isn’t used by PL.

as far as I can see RAW are OK but I rotate few of them. The JPGs have to rotated again but no further editing has to be done

I my Canon .CR2 files, I find two “orientation” tags.

When I switch automatic rotation off in the camera, the EXIF orientation can be set to “1” (normal), but the MAKERNOTE camera orientation does always show, how the camera was held when the shot was taken. Maybe some if the discrepancies can be caused by such tag differences.

Maybe, it’s s phone so I can only use jpg
Rotation has to be done on most of the landscape ones that come up as portrait, the rotation in the DAM is carried over into the 3nd but not PL which rather doesn’t add it to the dop or jpg files which the NAS manages ot failed to read them which makes me think it’s just held in the data base otherwise why can’t it read information created by the same program on a different PC. My RAW have no problems.

Didn’t think to try it before, copied some jpg’s and dop files to a new folder on the original PC. No rotation when opened the information is clearly kept in the data base not in the dop or even imbedded into the jpg as Photo Supreme does. Why on earth have bits of correction stored all over the place. As PL fails to cater for nearly all phones and any unsupported camera all have to use jpg if they are to be used in PL and I really don’t want to mess about with different processers when adding occasional phone images but keep them together.

Are you sure that Photo Supreme is writing the orientation into the JPEG file, or is it just keeping it in its database?

Can you take a photo that has not had its orientation changed, duplicate it, change the orientation on one copy in Photo Supreme, then post both files here?

I will use ExifTool to see if there is any difference.

My iPhone 12 correctly marks both landscape and portrait images, which appear correctly oriented in Mac Finder and all other software. What is your phone?

Hi Photo Supreme doesn’t like PL create XMP files for jpg. If I copy them between PC’s the 2nd Photo Supreme is fully updated including rotation so it must be using the jpg.
The phone is a Mi 9 only any good as it has a Sony camera in it!

I notice that the display in windows is showing the image as rotated after doing so in Photo Supreme so that can’t be as a result of it being in Photo Supremes data base. So why can’t PL see this change added by Photo Supreme but maintain the original rotation? 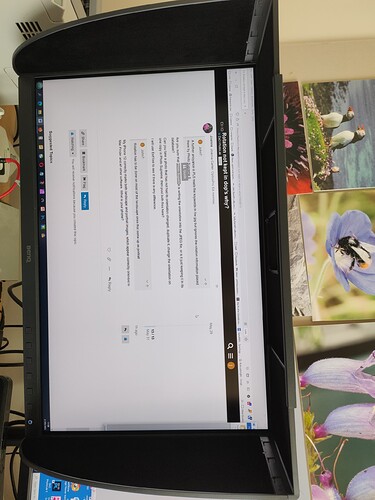 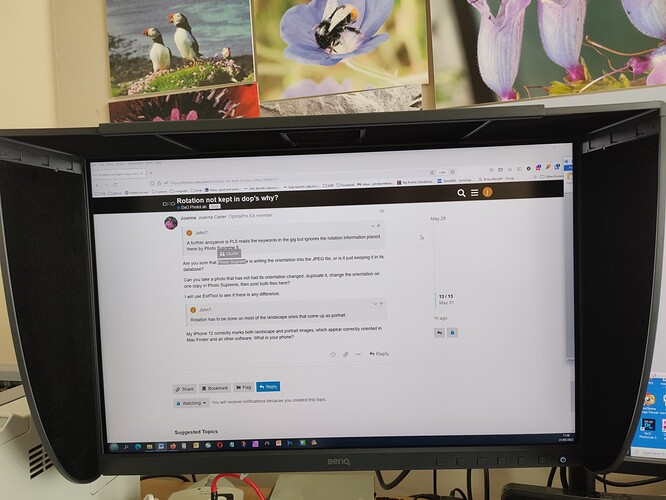 Noticed forum has reduced files a great deal so home they have the data you want?

There is very little metadata in the images you have posted and absolutely no orientation tag.

You might like to zip the two files as the forum software is compressing the life out of them if they are posted as images. 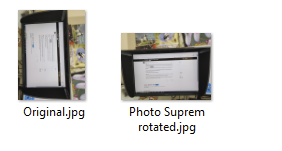 Here is the orientation tag from the Original…

… and here is the orientation tag from the Photo Supreme Rotated… 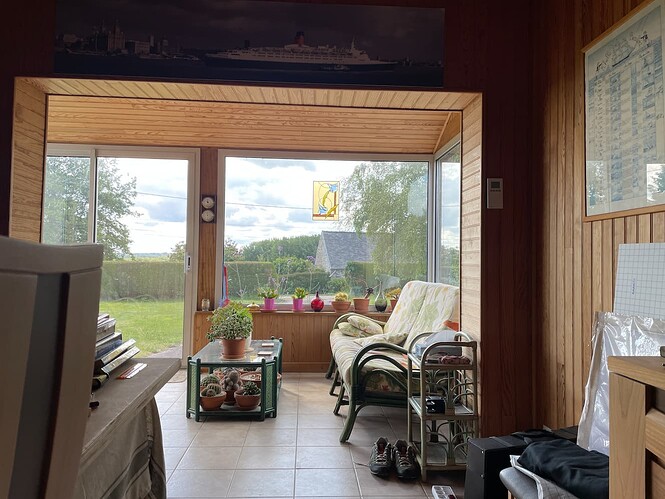 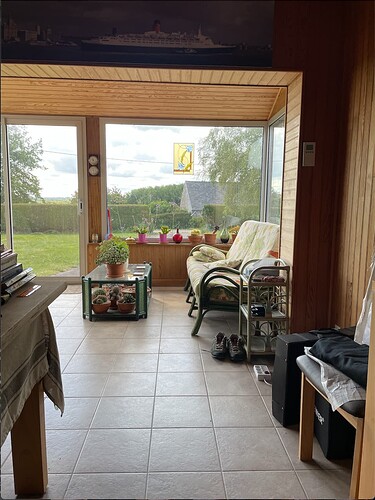 Yes I noticed PL was showing it OK but did it again and then it didn’t? But to check I just went back in and now its showing both rotated ones OK.
I don’t undersatand what is happening diffrently as its always needed to rotate in PL even after doing so in Photo Supreme which is why I got fed up with this and started asking what I could do to correect it. Somthing I am doing or one of the programs has changed and its now on these tests correctly reading the changed rotation (after reopening anyway)

The only thing I can think of at the moment is - are you viewing the files in PL, even if you do nothing with them before viewing and changing the orientation in Photo Supreme, or is PL open on the same folder whilst you are using PS?