I was working with the repair tool recently a little bit more than in the past. I have found an issue/bug that is pretty annoying and time consuming, not sure if it was reported before.
I was repairing certain areas in a picture at 200% view. 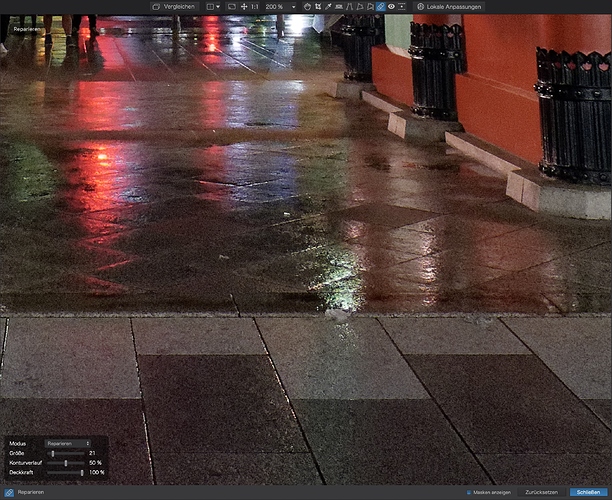 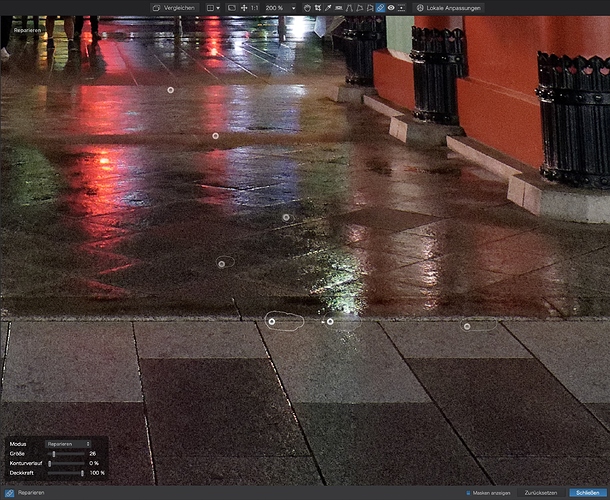 After a while I decided to repair more areas, so I switched back to 200% view and clicked on the repair tool again. However, all ‘old’ repair masks have shifted. You can clearly see it at the top, where the repaired areas (cigarettes or something else) have reappeared, but also in the other parts of the image. 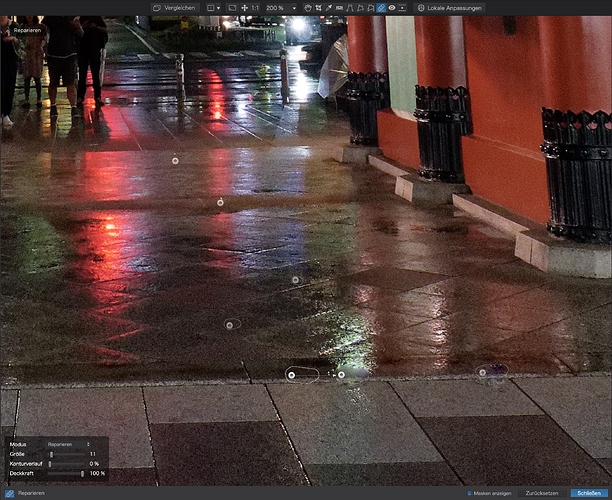 Bildschirmfoto 52806×2290 2.18 MB
You actually can start the repairing from scratch. The shift however will always occur if you come back to the repairing tool as if Photolab is not recognising the position of the repair masks properly in accordance to the magnifying percentage. I am using the Mac version by the way.
1 Like
OXiDant (Peter) August 19, 2020, 12:06pm #2

I have to ask,

, no angle view perspective changes of any kind and no crop changes?

And the shift are they shifted randomly or all to the same angle and distance?

Edit, 200% is half a pixel, could it be randomly erroring in positioning due grid size?
No problems in 100%?
More at higher zoomlevel? 400%

No, Peter, there were no perspective changes applied.
I know that DxOPhotolab does not handle masks and such geometric changes well. I also have encountered this behaviour in other zoomlevels before, however, I am not able to reproduce this at will. Right now, everything seems fine. But from time to time it gets really annoying and I have no clue why.

I think the “pin” is bount to a grid x and y value and from there all other pixels which are in the maskform are calculated to that point. So if the pin is jumped a few pixels it’s of target. why i don’t know . One thing can be a factor : version of the dop file.( but i assume it arn’t that old images that you upgraded dxopl version inbetween.)

But if all pins are moved equaly it’s the x-y grid that shifted from it’s point zero which is generated depending on the optical module. lens correction how much is visible of the original raw capture.
Optical module?
Is it lens depending? Or camerabody depending?
Focal distance?

Edit, there has to be a trigger. Finding that trigger is the pain.
If you notice this and you look at other images are they also influenced?
Does restart dxopl solve the issue? ( so it jumps back to original place?)

The only way you can find it is rule out one function or cause at the time.

From looking at my pictures again I would assume that the shift is not equal. The bigger masks at the bottom have shifted the most in my opinion.

By the way, the same problem was described by Dan here:PL3 Repair

I am using version 3.3.2.60 with High Sierra and this has happened for me twice.
I do not think it has something to do with horizon changes.
I have tried to force this fault to show up again but I have not succeeded and I can not remember what I did prior to when it happened.
If it happens again I will try to remember the edits prior to the fault.

It seems that it could have something to do with cropping. In an already cropped image it seems to occur more often than in uncropped ones. But again, we have to verify.

This happened to me with a local adjustment (brush).
In my case I had enabled lens distortion correction probably after the correction mask was applied.