Just something basic for now- subtract a user-provided raw dark frame from a raw main photo before any other processing, to provide the cleanest starting point possible. And just so there isn’t any confusion, this is an operation ideally and most accurately performed on raw data.

But, yeah, just the basics. If the user wants to use an averaged dark frame stack, there are already programs that can stack the raw dark frames into a single raw file which could then be brought into PhotoLab for just the basic raw subtraction function.

there are already programs that can stack the raw dark frames into a single raw file which could then be brought into PhotoLab for just the basic raw subtraction function.

Are you sure those apps produce a true RAW file? Or is it an “Adobe RAW”, wich is not a true RAW file and which PhotoLab could not treat as such for the purposes of noise reduction?

Though rare, a few stackers have emerged over the last few years that will actually export their result as an un-demosaiced valid raw dng file that can be read normally by raw processors. The most popular one is probably Kandao Raw+.

It’s a bit sad that so many companies (mis)use the term raw when it basically is a repacked 16-bit tiff, in their strive to be something more.

It would be so much simpler for everyone if they all just explained it with what it is. A high res, high bit depth tiff suitable for a lot of post processing.
But RAW it’s not any more.

If i am right every rawfile is mapped and 16bit, 12bit or colordepth, 4bit for location, rastergrid data.
As long as it is stored in r,g,b,(g) data and not a rgb colorspace it is not demosiaced and free for interpretation of a rawdeveloper.
Darkframe is done just before the rawfile is compute right?
Hotpixel removal by layover. No shotnoise or colornoise removal.

Highres raws are stacked multishots and i am not sure but then it should be preworked and demosiaced before you can stack them. That’s in the best option a lineair DNG.

Hi Joanna
It would prevent a lot of confusion if DNG raw and DNG demosaiced files were correctly differentiated. Allowing the confusion is beneficial for Adobe who devised the DNG format as many LR users believe that they have an end to end raw workflow because their HDR, Pano files etc have a DNG suffix.

One way to recognise that the file is demosaiced is that the file size roughly increases 3 times (compression excluded). This is because the raw data for each pixel only has colour information derived from the light transmitted by the filter above the pixel, either red, green or blue.

) the actual colour of the light falling on the pixel and assign red, blue and green components to the pixel. Thus the file size increases 3 times.

As an aside it helps to understand the difficulty of the task when you consider that the Bayer filter is not perfect and that some green or blue light will be passed by the red filter so that the signal value recorded at the pixel will not actually only be “green” light. This is one of the reasons why in the old days the camera manufacturers raw processor gave better results than third party raw converters as the camera manufacturer had the complete specification for the Bayer colour filters. Famously Nikon used to encrypt their white balance recorded in the raw file to further hinder third party developers.

Wow, Peter, I am so out of my league now. Is there a 1000 pages book that I could read to even start to understand anything of what you said ?

It’s indeed a difficult subject. But lucky we are:
1)we don’t need to know how the rawfile is build in order to use it in dxopl.
2) colorspaces lots of fun but all we need to know is start with a bigger one then you end up with and your fine.sRGB is always a good choise as endproduct if you don’t have any tools to calibrate screens and such.
3) the camera makes no mistakes, it’s just you…

VIew from Win Hill in the Peak District. Panasonic G9 with 12-60 lens. See text below for further details. I’m sure that it will come as no surprise that I’ve been wasting lots of time with my new …


Reading about the highres file is seems to be a genuin rawfile.

Edit: does anyone have a G9? i would like to play with a highres 80mb “rawfile” of it
Just to see what it is and does.


At the end there are some highres files, of about 125MB.

hmm to say it are excelent highres images to test difference…

It seems in deed real rw2 rawfiles stacked, sensor shift files.
i always was in the assumption that it was a kind of internal stacking process.
a 4 rw2 files with pixelshift stacked and processed to a 16bit tiff file.

did a crop: (left highres file)

i hope it was hand held why it is less sharp: 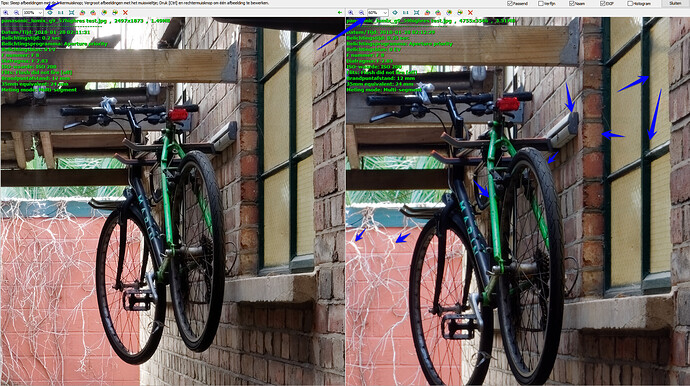 this isn’t a improvement so to speak.
(any one a tripod version on hand?)

I know Robin from long ago, mostly because he wrote many books about the Niks.
I downloaded Kandao Raw+ and tried it. Hard to tell what it does exactly but it is not simply about denoising. For that it is not nearly as efficient as DeepPrime but the output is actually non-linear.

hmm to say it are excelent highres images to test difference…

It seems in deed real rw2 rawfiles stacked, sensor shift files.
i always was in the assumption that it was a kind of internal stacking process.
a 4 rw2 files with pixelshift stacked and processed to a 16bit tiff file.

Pansonic works with 8 shots (Olympus 16, Pentax 4 and Sony 4)
The files are legit RAW (only 128 MB for 80 MP). PL opens them and applies DeepPrime on demand. DP would not work with a TIFF or a linear DNG.

i hope it was hand held why it is less sharp:

this isn’t a improvement so to speak.
(any one a tripod version on hand?)

I am not at home ATM, camera with me but no tripod. I’ll have some for you in the days coming. I’ve experimented a bit on a tripod and the files are just splendid, no need for demosaicing, great 3D effect on products.