Reviewing old archives and I have but no longer use an older Olympus camera. I’d like to try processing some of the files in PL to get certain effects, and can certainly do so with the JPG, but it’s a shame that files from older bodies are not usable even generically by the software.

I thought maybe I had changed something by accident with exiftool that left the files unusable, so I went to an older backup and still no go. Using exiftool generic output I can read the exif data fine, but can’t even preview the files in PL6.

I am not particularly looking to process this specific photo, I just randomly selected one. I saw on a forum somewhere where someone used exiftool to “lie” to PhotoRaw by replacing the embedded camera model with a supported model. In some cases, at least, if PL (4 in one discussion but probably same applies here) had seen the file already then changing the model to a supported camera didn’t work but if they changed the name of the photo then it would read it and accept it.

This all seems very cumbersome. I know the Olympus SP565-UZ is obsolete, but I don’t think I should have to go to some 3rd party utility to process the raw file to a format that PL will read? That’s crazy talk. But I guess I could try converting the thousands of ORF files I have to DNG with it and see if it helps - but if the problem is the camera model (old or new) is not supported by PL, then would it not still fail?

(Just downloaded DNG converter because why not).

Okay, just converted a folder full of the orf files to dng, and at least the thumbnails now work, and no warnings about corrupted or missing exif data. But still no edits here. 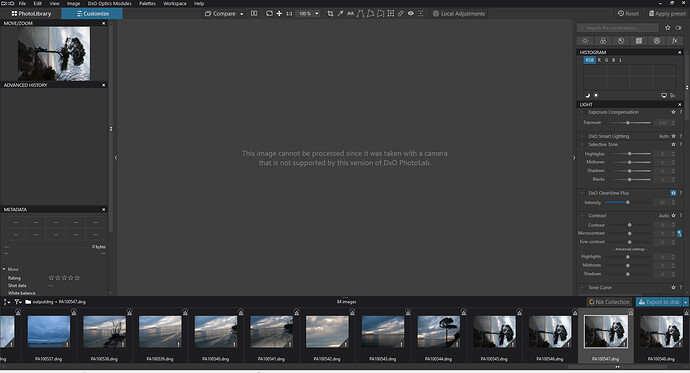 Oh well. I’ve typed this out I guess I’ll post it. I don’t think there are probably good answers here. You can’t support every digital camera that ever existed, I guess, and you (apparently) can’t just wing it to get the basic editing done either. So here’s a use case that heads toward another solution for processing. I wanted to apply some of the presets I like in Photolab to some of these older files. And of course I can do so, I just have to process the RAW files elsewhere and then work on the JPG files. It’s just disappointing.

I know the Olympus SP565-UZ is obsolete, but I don’t think I should have to go to some 3rd party utility to process the raw file to a format that PL will read

If DxO is removing support for cameras which PhotoLab used to support, all of us need to know about that right now.

If PhotoLab decided to withdraw support from my Canon 20D, 40D, 5D files, or my Pentax ist* files, or some of the weird Sony NEX cameras I had, it would not be okay at all. I do go back to those files to reprocess.

There’s no way most of us want to invest in RAW software which withdraws support. For those arguing to run an older version of the software, that means maintaining an entire operational vintage version of the software and hope nothing happens to it, as the licensing process for older versions is anything but straightforward. I don’t know how many of you have noticed but when we upgrade our licenses now DxO is actively removing our older licenses and serial numbers. This is also a big problem.

If DxO is removing support for cameras which PhotoLab used to support, all of us need to know about that right now.

Your saying that prompted me to check my Nikon D100…

I always assumed this meant supported since PL1 but I just loaded up PL1 for the first time in years and found even that doesn’t support the D100.

Hopefully, @Marie posted that support is coming in the next update

Has that camera ever been supported? I can’t find it in the supported camera list.

Hello, we only removed RAW support for Fuji S3, S5, S100FS.
About Olympus SP-500UZ we supported only JPG files we we added it and we never supported SP565-UZ.
There are 37 old cameras we only support in JPG, for some of them we will add RAW support on demand but only bit by bit when we have the bandwidth and the possibility (as we need the camera to shoot images which is not always possible).

There are 37 old cameras we only support in JPG, for some of them we will add RAW support on demand but only bit by bit when we have the bandwidth and the possibility

Thank you for clarifying the situation Cecile. Is there somewhere we can see the list of 37 cameras which are not supported in one place? It could save some of us quite a bit of frustration to know where we stand in advance.

Hi Alec, such a list doesn’t exist, but it’s a very good suggestion. For the moment, please use the supported cameras list to check the compatibility.

A Fuji S3 Pro was my very first DSLR, but I never knew it was supported.

I don’t know how many of you have noticed but when we upgrade our licenses now DxO is actively removing our older licenses and serial numbers.

You mean if I was to reinstall PL2 I would not be able to use it? Even though I have copy of the license key in a text tile?

Thanks, I appreciate this answer. If needed I could dust off that camera and supply new images (or upload old ones) (or mail you the camera so you could do so). But I get that older cameras may not have support. It seems like, and I know it’s just dream-talk, that there’d be a default Nikon/Canon/Olympus/etc standard profile that would work on the oddball models. Maybe it wouldn’t supply lens corrections, but we’d at least be able to see the data based on some universal benchmark the camera manufacture tweaks as time goes on and new models arrive. I’d the think standard for “ORF” or “NEF” or etc. files started at some point and then was built upon to get to the latest models. If that minimal standard exists, then at least minimal support of non-conforming models might be possible. (Probably a lot of effort on your side to capture one-off needs by users like me, but…)

Thanks all for weighing in. When I first got into digital I used an Olympus point-and-shoot with a 10x zoom, about 4.1MP. It only had options to shoot in JPG and TIFF, and at the time I had no idea why I’d want to shoot in TIFF, so the tens of thousands of photographs I have from that camera are usable in PL even if without built-in corrections. This camera (the SP565UZ) was a definite step-up from that but not in the SLR realm by far, and when my wife and I would do outings (2009-2010) I’d use my SLR and she’d use the Olympus. There are some photos from a trip to the beach that I was really interested in re-exploring, and that’s how I stumbled upon this. Just processing files that can’t be re-done.

This should be helpful:

Very helpful. I did have own one of the cameras on this list at one point.

Since my Olympus files were only raw, and I didn’t have the original Olympus software before, I used the Adobe DNG Converter to create DNG. Interestingly, I could then at least preview the images in Photolab, but was told that I couldn’t edit because it was an unsupported camera.

Really wanting to see those beach pictures from a while back I went to Olympus and downloaded their latest software. Did a mass convert to JPG, and then looked at the folder again. Surprise! DXO must have a “supported only in JPG” for this camera as well, although it’s not on your list: 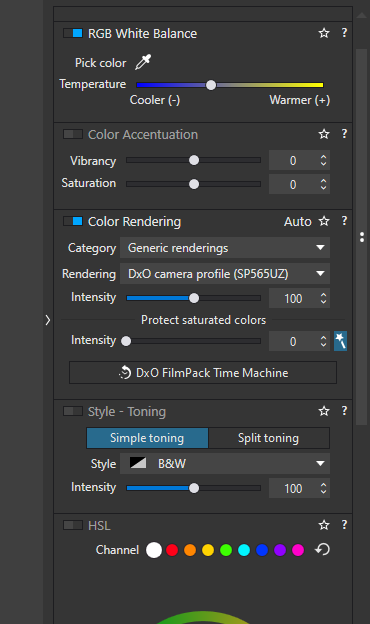 So maybe add SP-565UZ to the above list? I’d have preferred not to use the Olympus software at all but at this point it’s better than nothing. I don’t really want to re-learn all the tweaking controls. Fortunately for the images I want, the JPG’s are probably a good enough starting point, so if I just do the batch conversion I can still edit in DXO and that’s okay, I guess.

Thanks for the feedback.