Is it possible to partly protect an area from the control line effects, and not only a hundred percent? I don’t want the protective line to make a gradual protection but instead lets say a 50 percent protection over the full protective area.

The amount of space between the solid and dotted lines determines the amount of gradient you will get. When the lines are almost touching each other there is no gradient. The farther apart you put them the greater the gradient area. The Chroma and Luma sliders also affect the results.

but instead lets say a 50 percent protection over the full protective area.

Hi @chris-photography ,
In Local correction Palette, you can apply a percentage (100% default) with the Opacity slider to your correction: 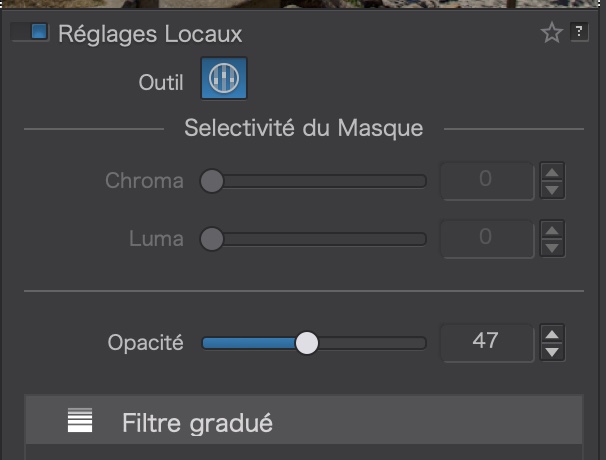 Thank you. I wasn’t being clear enough. I am using the negative control lines and have the distance between the lines set to very little or none, so that there is basically no gradient. The problem is that the area below the negative control line - which is protected - has no opacity control. So it’s always a 100 percent protected. I would like to protect the area, but not completely.

Thank you. I am using that, but as I understand it, the opacity slider only works for the control line itself, not for the negative control line protected area.

Experimented with a patch of solid colour, which of course is not the normal use case, but …

also see → Editing high dynamic range images in PhotoLab 5 - #328 by Wolfgang
with the duplicated Control Line in VC3 (using the same Mask selectivity settings, but picking up a different colours to broaden the colour range)

If you duplicate a control line you end up with two seperate control lines that are completely independent.

@chris-photography You need to add a positive control line first then negative lines or points to protect the areas you do not want to affect. In the side panel under Local Adjustments you can adjust the Chroma and Luma sliders to control the mask. Turn the mask on and off by pressing the M key.

Kind of cumbersome and …

See my description before … use a second positive control line (new or duplicate of the 1st) instead of a negative one – to have separate and 100% opacity control.