The new Resizing Mode feature, as released with v4.2 upgrade, has some curious/mysterious options:
… 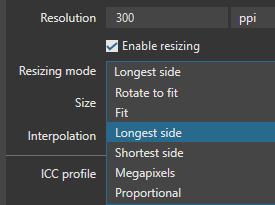 But: Fit & Rotate to fit are a complete mystery to me … Has anyone worked these out yet ?

I would believe Fit and rotate to fit are meant for social media where you would prefer and 1024 square or standing crop where PL does the rotate, scale and fit for you?

Yes, I’ve tried all sorts of theories too - - but none of them have proven to meet my expectations !

Did some experimentations with pics in landscape (and portrait) mode and exported them to disk
with mode “Fit”, “Longest side”, “Rotate to fit” and “Shortest side”.

note:
The print module’s same name option “Rotate to fit” is something else. It allows to rotate the output file to (better) fit the papers’ orientation.

I reckon the only useful enhancement was the addition of Shortest Side (to complement the existing Longest Side option) - and I cannot imagine users readily choosing to use any of the other options.

When these resizing options appeared, I was happy because I thought I would be able to use the same export for portrait and landscape photos.
When exporting to my site, I would like my photos not to exceed certain horizontal and vertical dimensions. For example, if I set 1800 x 900, I expect the exported photo to be no higher than 900 pixels and no wider than 1800. This would allow me to resize photos up to 900 pixels vertically, which is the resizing I want. And in the rare case of panoramas, the horizontal criterion should work.

However, the options work in a strange way and do not meet my expectations. They are practically useless.
In my example, they resize up to 900 pixels for the smaller side when it comes to a portrait photo.

It is desirable for one of the developers to give a meaningful comment for these two options and give us a specific argument for their use.

I take this opportunity to express the opinion that the interpolation option also needs better implementation. “Bicubic sharper” gives too sharp image, while “Bicubic” - too soft.
The compromises with the ICC profiles continue when exporting to the sRGB.

Please give us first-class export quickly!

Well, it could be (better) explained – and also taken care for sharpening! *)

@Wolfgang
Before the last update, I used 2 settings for export - one for portrait and another for landscape.
I had hoped to be able to use only one. But I hurried with joy …
In recent years, since I have been in this forum, I am increasingly convinced that we often look for a way to get around a problem in a PhotoLab. I would very much like the developers to strive to make the photo lab more and more friendly for us, their customers. At this point I start to think that our voices are a voice in the desert …

If you’re interested in a new feature you should create a feature request allowing others to vote for it. Popular requests are definitely considered by DXO. Suggesting a minor feature update in an existing thread that may only benefit the person posting it will most likely fall through the cracks.

There have been a hundred or more suggestions for small one-off enhancements that may provide a useful benefit primarily for the person suggesting it, Getting them all implemented is simply not practical

Only a very small number of these smaller enhancements are implemented so DXO’s development staff can focus on significant upgrades to existing features as well as major new features.

There are a dozen or more small annoying things that I would love to see fixed in Photolab that will likely never be implemented. I try not to get too hung up by that and instead focus more on what Photolab does well and it’s functional growth from version to version.

There is a popular slogan on social media right now: “Who wants - finds a way, who does not want - finds a reason.”
In the last two years, I see that there is a constant search for a reason why many things do not be realized.
I have initiated requests and participated in discussions many times.
I also value my time and at the moment I see no point in continuing in this discussion.
If anyone wants a better product I will be happy. If no one wants development - so be it. I can find a solution to my problems. But to smash the wall with my head … no, thanks !

thought I would be able to use the same export for portrait and landscape photos.

I believe Koko’s hope/expectation was to be able to use a single export option for both portrait & landscape images - - without having to export them separately, with different options for each format.

It is desirable for [DxO] to give a meaningful comment for these two options and give us a specific argument for their use.

Yes - that would certainly help, I’m sure.

There have been a hundred or more suggestions for small one-off enhancements that may provide a useful benefit primarily for the person suggesting it, Getting them all implemented is simply not practical

On your very point, Mark; this one’s really “curious” … the 2 new “Fit” options have been rolled-out without any explanation of what they’re supposed to do, so that we’re left having to guess at the results of our tests (with, for me, at least, no real enlightenment) … and without reference to any user request/suggestion that I recall having ever seen (which is not to say that DxO should only release new features as requested by users - - but, this one seems to be quite obscure and puzzling).

I agree John. Frankly I haven’t really used them in a controlled test yet but will do so this weekend. I probably won’t necessarily come up with any new insights but if I find something useful I will report it.

Regarding Bicubic sharper, in my opinion is a very strong function of DXO PL - i think highly of it. That is so long dimensions and PPI are spot on for the end media otherwise strange square artefacts appear.
Additionally, pushing sharpening too far in RAW development also leads to over sharpening at export with bicubic sharper.

If i follow the above then my high res RAWs look great viewed on 260ppi laptop monitor, 570ppi phone screen, or 2400x1200 DPI printer.

Koko, are you certain bicubic sharper is the sole cause?

Koko, are you certain bicubic sharper is the sole cause?

yes, i compared the two export options with the same sample situations.

For my style, when exporting to any output resolution, the bicubic sharpener option gives too sharp images with characteristic artifacts. By my standards, I would not give such an image to a client.
Тhe bicubic option gives decent results when exporting in high resolution. I would be happy if I could add a little more sharp, but it is not fatal if I do not add.
When exporting in low resolution (for internet), I would like to have an option that is sharper than a bicubic, but not as sharp as a bicubic sharper. Maybe somewhere in the middle.
I have an active lens sharpness (to make the most of the DXO profiles), but not an unsharp mask.

I would like to have an option that is sharper than a bicubic, but not as sharp as a bicubic sharper. Maybe somewhere in the middle.

I agree with us both that on export if you apply bicubic sharper with matching resolution and PPI then the results will be stunning, what i like to think of as that sleek DXO look. Should i send this file to someone who will view it on monitor with different resolution and PPI then yes the over sharpening and artefacts appear ruining the image viewing experience.

I’ve barely been near PhotoLab in months for a variety of reasons and so hadn’t seen these, but had I seen them I’d not have had any problem deciphering their use as, with the possible exception of “Rotate to fit” and “Megapixels” they are common options in many graphics programs.

In fact, the “fit” terminology is used widely, even on setting desktop wallpaper images on macOS.

As for why one might want megapixels — well this was actually a request I made to the developer of another graphics program. If I am in the habit of taking 3:2 ratio pictures in portrait or landscape, then exporting them with “3000 pixels longest side” is a fine choice resulting in either 3000x2000 or 2000x3000 pixel images.

However a small number of my photos end up cropped square and neither 3000x3000 nor 2000x2000 are suitable as they subjectively appear “too large” or “too small” respectively. I’d rather they be somewhere in between. As 3000x2000 is 6 megapixels, it seems logical that square images would be exported at around 2450x2450 resulting in roughly the same number of pixels in the photograph.