I have just tested the new PL6 and was looking forward for the added functionality for the organization of projects. Unfortunately, I feel that the implementation is extremely confusing. There is no option to manually sort the projects (and the images in the projects can still not be sorted manually neither).

To make it worse, also the automated sorting by name is extremely confusing, as it does not respect any proper order of the subprojects.

For example, if I have a project group with a name that is in between of two projects, those projects will be split up and the project group pushes itself in between. This becomes very unorganized with a larger amount of projects and subprojects. 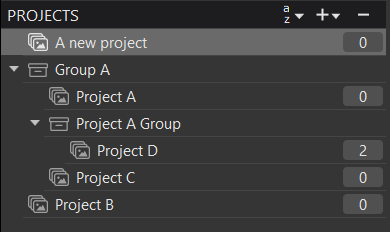 “A new project” and “Project B” are on the same hierarchy, but the one is on top, the other on the bottom.
Same for “Project A” and “Project C”.

In my opinion, every Project of the same hierarchy should remain together and not be interrupted by subprojects.

Another thing, the projects are extremely slow on my computer. Just right-clicking on a project or moving a project takes 1 second to react, everything is extremely sluggish, which makes it almost unusable to use.

I don’t think I really understand what you expect from the sorting.

‘A new project’, ‘Group A’ and ‘Project B’ are all root level items and sorted alphabetically. That seems like a valid way to sort. That ‘Group A’ is a project group and the others are project doesn’t matter: they’re all on root level.

Same goes for the direct children of Group A: ‘Project A’, 'Project A Group’s and ‘Project C’. All on the same level again, being a direct child of ‘Group A’. All sorted alphabetically again.

‘Project D’ is a child of ‘Project Group A’ and also shown as such.

In my opinion the tree view is correct.

So what do you expect from the sorting? Projects first?

On Mac, Groups precede Projects and both are sorted alphabetically. 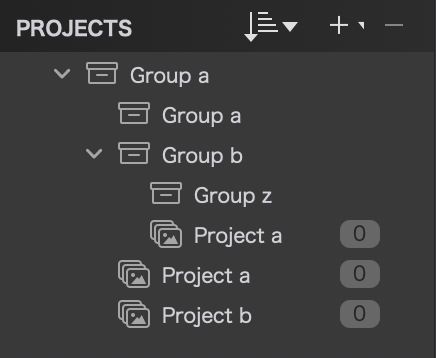 Never mind, I see what you mean now. I should try that on my Windows machine

@platypus that looks much neater and way more organized in my opinion. But I am not sure if it is really a mac vs windows problem. In your case, the groups remain together, because the letter G from groups comes before the letter P from projects. I guess if you named the groups differently, it would be all mixed up.

One work around would be to group everything and not to have any ungrouped projects. But that would be an unnecessary extra step in my view. Basically I need to create an extra group for all projects that don’t be long to any group. I feel like I am fighting against the software, I’d prefer if it was helping me ;-).

you have some options → Name ascending / descending … 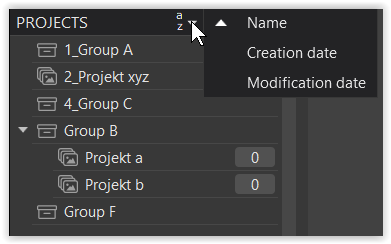