I updated to PL5.1 several days ago but for some reason I keep getting alerts for it every time I open PL. Whereas in the past I’ve never received update alerts for a PL or Nik update that I’ve already installed.

Are you sure this isn’t the DxO Hub dialog, which can be set to not appear… 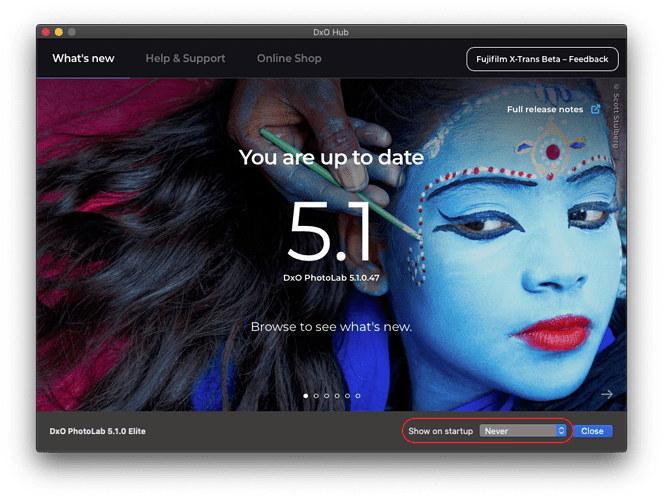 Yes, I am. It’s a smaller pop-up than that one - the same kind that would pop up to notify a new update before the Hub existed. And it doesn’t say, “You are up to date”, even though I am. It asks me if I want to download PL5.1. As I said, this kind of update previously stopped appearing for a specific update as soon as I’d downloaded and installed it. I’ve got the Hub set to show on startup once a week.

You’re right, I do have build 4681 and if I open the Hub it does say there’s a new version available. The pop-up mentions the build number in small print at the top. But neither the release notes that you can link to from the Hub (which are for PL5.1 generally) nor the pop-up say anything about what the new build adds/changes/fixes so I can’t see what improvements 4690 has over 4681 or how necessary it is for me personally to install it. Any bug fixes could be irrelevant to me - they could be for specific operating systems or cameras etc. So it’s a not a bug, but more information would be useful.

A word of advice - if there’s an update available, take it. There can be all sorts of things that get fixed/tweaked - sometimes things you haven’t yet stumbled across.

For sure. But it would still be nice to know what they are! Especially if we’re going to get updates to a major new version (a .1) a few days after it’s been launched.

I was surprised that an update prompt appeared literally the day after I downloaded the previous update to PL5 (which I’d downloaded only a couple of days after downloading PL5). At first I thought there had been a mistake.

(Incidentally, neither update has addressed the issue of being unable to save a file in Photoshop while that file’s folder is still open in PL5, despite changing the file name in PS….)