On the nVidia email for its April 2021 Studio Drivers Update it says this of AI using programs, they say this.

Of note it mentions Topaz products implying that Topaz and the other softwares mentioned collaborated with nVidia to enhance the involvement of the GPU in processing compared to CPU only processing.

Now, in PL4 Preferences ands tab Performance > Deep Prime Acceleration my GTX 1050Ti is listed and I surmise if “Auto” is picked PL4 will indeed make use of the power in the GPU…but does it and can it be improved…?

But based on the nVidia text copied above is there more to be gained by DxO being more involved with nVidia???

PL4 Preferences ands tab Performance > Deep Prime Acceleration my GTX 1050Ti is listed and I surmise if “Auto” is picked PL4 will indeed make use of the power in the GPU…but does it and can it be improved…?

My AMD Radeon RX 550 is similarly recognised - but, it’s only barely used by PL4 by default.

Changing the following setting (= true), within file DxO.PhotoLab.exe.config in folder C:\Program Files\DxO\DxO PhotoLab 4 , forces PL4 to use the GPU much more aggressively (tho, with some impact on responsiveness of your PC whilst it’s doing so).

As I understand it if your GPU has marginal performance then PL4 may choose to use the CPU to get better performance. I leave mine on auto and the GPU is used for deep prime.
Note, in Windows 10, if you look at the task manager, you may find the GPU usage is 0% but that may be because it’s only showing you 3D usage (PL4 doesn’t use 3D). If you want to see how much PL4 is using your GPU, select the GPU in performance manager, and on one of the 4 charts, select Compute 1. This is the part of the GPU that’s accessed by PL4.

in Windows 10, if you look at the task manager, you may find the GPU usage is 0% but that may be because it’s only showing you 3D usage (PL4 doesn’t use 3D).

It’s “interesting” in my case, Mike. Without the config setting (shown above) my DeepPRIME performance is reeally sloow ! With that setting, it improves remarkably … but performance manager reports like this: 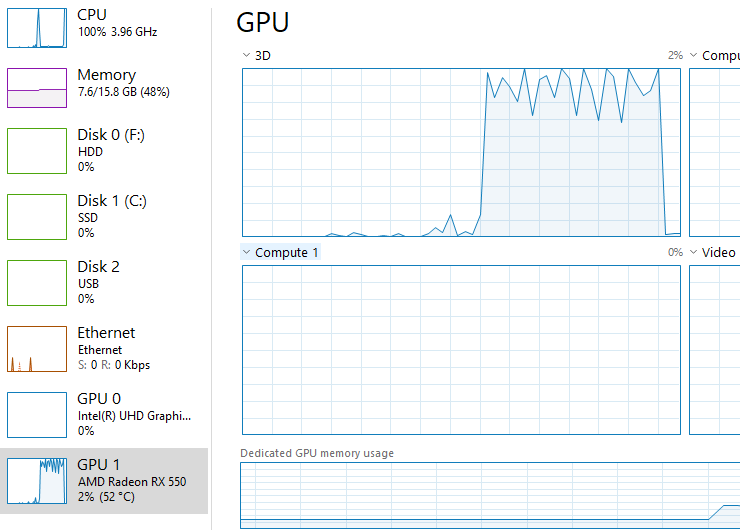 If I recall the AMD Radeon RX 550 was kind of a special case. I don’t think your config change will have a similar positive effect on most graphics cards supported for DeepPRIME.

… to see how much PL4 is using your GPU, select the GPU in performance manager, and on one of the 4 charts, select Compute 1. This is the part of the GPU that’s accessed by PL4.

thank you – learned something

John that’s weird. I’ve never seen 3D above zero while running DeepPRIME. It’s always been compute 1. I’ll need to do some experiments with the new driver.

Many thanks all for the insights.

Yes, my 1050Ti is right at the humble end of the GPU power scale and my thought was if PL4 makes use of the GPU then logically DxO might benefit from engagement with nVidia to ensure the best of what nVidia drivers offer is made use of in PL4

I will have to monitor, using the task manager on my next processing session and see what I can learn about the involvement of the GPU, or not as the case may be?

You can always benchmark with the GPU enabled and disabled and time the DeepPRIME processing.

On my 8 core Ryzen 4900H processor laptop with RTX2060, Sony 24MP files take about 15 seconds to process with GPU and about 60 seconds without.

That’s interesting. On my Windows 10 machine with a GTX 1050 ti, my 20mp Canon 7D Mark II raw files take about 24 seconds to apply DeepPRIME vs 75 seconds via the CPU. I would have thought an RTX 2060 would have been faster than that.

On my Win10 environment, exporting a ~20mp Sony a7iii ARW to JPG, with DeepPRIME applied, takes;

MIke I understand what you are saying, but your card is so much more advanced than mine that I would have thought your DeepPRIME processing would have been faster.

Yeah. It’s a relatively thin laptop so somewhat dependent also on the system cooling. If you’re comparing to a desktop RTX2060 it will be considerably faster than the mobile RTX2060

The release notes for the latest Studio Driver state:

This would seem to indicate that the RTX is the minimum product tier required for AI enhancement at the driver level. If so, no luck for me.

I surmise that the only way to see if the new drivers give any advantage to more humble GPU’s such as mine is time(benchmark) so test runs and then run the same after the newest driver is installed???

PS but for me, I cannot justify the cost of the RTX series GPU

New AI features in top creative apps, running on NVIDIA RTX GPUs , are changing - and accelerating - the way we create … …

I took the decision to replace my struggling AMD Radeon RX 550 GPU with something better - - with the best I could go for limited by 75W power supply (from PCIE connection).
I now have a NVIDIA GeForce GTX 1650 … and it’s performing very well.

To your point, Ho - the accompanying “GeForce Experience” software finds and optimises certain apps - and these are the ones it found on my system;

When I have installed the drivers in the past I think I declined the GeForce Experience element…so wonder if my memory is right, that there may be an advantage in letting “it” configure itself to aid the GPU running to best advantage with the ‘discovered’ applications???

Interesting. My experience is that exporting multiple images using DeepPRIME is several seconds faster per image then when exporting images individually. I assume that this is due to the addition of the same export startup overhead time whether you export one image or multiple images.

In my case, with my lower level GTX 1050 ti, a single image takes around 23 seconds to export using DeepPRIME. Exporting a batch of 10 images using DeepPRIME will average around 17 seconds per image.

Your results seem to indicate the opposite. Your batch of three images took slightly longer per image then when exporting a single image.