As a new user of DXO PL I’ve been enjoying the discussions in this forum and am impressed by the technical knowledge of some of the “EA Members”. (BTW, what does that acronym mean? I gather it’s some sort of secret society?)

One thing in particular I have learned from a couple of posts from @Joanna on processing is that I need to take a closer look at “lens sharpening” than I did at first. That’s what this post is about: I apologise for it’s length. TL:DR “Lens sharpening” in PL appears to be input-deconvolution sharpening whose parameters are, uniquely among RAW processors, user-controllable to some extent. … But I could be wrong

I’m familiar, as you probably are, with the Bruce Fraser taxonomy of ‘input sharpening, creative sharpening and output sharpening’ (Jeff Schewe remains a proponent). But I’d never heard of PL’s ‘lens sharpening’ and, to be honest, I didn’t play around with it when I first purchased PL. I focussed, instead, on unsharp mask, a process I already understood well from Schewe’s book ‘The Digital Print’.

But I stopped using the Unsharp Mask adjustment regularly when I realized that, in PL, the differentiated ‘Fine Contrast’ adjustment in combination with a simple ‘Curves’ adjustment would often supply all the “global” contrast I wanted. After that, if I needed it, the local adjustment tools seemed to provide local ‘unsharp masks’ that could enhance contrast/user-attention in particular regions of the image.

I was intrigued to find that the PL Unsharp Mask provides one extension to the usual Unsharp Mask edge-exaggeration technique that is unique (in my experience of Raw image processors): the “edge offset” adjustment. The talent of this slider is to balance the user-selected amount of sharpening from the centre of the image (where all lenses are more acute) out to the edges of the image where few lenses offer the same acuity. This is a very valuable global sharpening option for some images (esp. those using wide-angle lenses).

I’m now trying to figure out precisely what Lens Sharpening does. The PL Manual says:“Lens sharpness is an optical aberration which results in a point being transformed by the lens into a small blurred circle.” What ‘small blurred circle’ is that?

My assumption is that the manual here refers to what is sometimes called the ‘circle of confusion’ or, technically, the "Airy disk’ (after it’s chief theorist). This is the focal-length- & aperture-sensitive ‘dot’ of light on the sensor formed by the smallest detail resolvable by any lens. The ‘dot’ of light representing even the finest visible detail of the frame is never just a point. It’s a circle of light (a “splat” of photons/waves) or, rather, a concentric set of such circles, that overlaps several of the photo-sites on the sensor and overlaps several other such light disks. The spread is a function of the quantum character of light and it is even more prominent when the lens is tuned, by design, to focus each detail, not on the surface of sensor itself, but on the layer of color-lenses that lies just on top of the sensor-sites.

The size of the circle-of-confusion can be controlled, to an extent, by the aperture/focal-length chosen by the photographer. Indeed, it is an important input into the calculation of the ‘hyperfocal’ distance for each chosen aperture/focal-length combination. But usually each sensor has a more-or-less optimal c-of-c based on the dimensions of the photo-sites on its sensor. For a 35mm ‘full frame’ camera, the optimal c-of-c is typically 30 microns.

What is the link between the c-of-c and image sharpness? Any object/edge apparently smaller than the c-of-c will not resolve well at your chosen aperture and focal-length: it will approach, or be smaller than, the diameter of the c-of-c (or the ‘outer regions’ of the Airy disk) and so will be unsharp. This is what is known as ‘diffraction’ unsharpness. For all sensors, but especially smaller sensors, diffraction becomes a problem as you stop-down your lens at any given focal-length (on M4-3 it begins to be noticeable above f7.1).

All demosaicing routines for Bayer sensors take diffraction into account when they calculate the interpolations needed to produce a color image from the sensor data. It’s what the developers call ‘deconvolution’ sharpening of the raw image and involves some sophisticated math to reduce the uncertainty in the definition of the overlapping Airy disks. But PL may be the only raw processor that exposes some user-control over this level of deconvolution sharpening on the input side of the image processing pipeline (DarkTable may, too, but I could never figure out the pathway through their jumble of idiosyncratic modules).

To be clear, the deconvolution effect can be achieved much later in the image-processing chain than at the de-mosaicing stage. The well-known Photoshop plug-in “Focus Magic” employs a form of de-convolution sharpening to great effect and you can mimic some of the effects in e.g. Lightroom’s unsharp masking tool by setting the “radius” to a relatively large number (e.g. 3.0) and the “amount” to a small number (e.g. 15%). Dan Margulis’ book “Photoshop Lab Color” went into this technique in some detail.

The advantage of using de-convolution sharpening, at least at the first stages of raw development, over e.g. ‘unsharp mask’ is that it really is sharpening of the captured image whereas ‘unsharp masking’ is only an artificial exaggeration of apparent edges above a chosen thickness. You will find it harder, although not impossible, to introduce artifacts like ‘zombie’ or ‘echoing’ edges that betray over-sharpening with unsharp-mask and the like. But you may also find that it appears not to ‘sharpen’ at all (as the ‘zero’ setting in the PL slider appears not to ‘sharpen’ like the unsharp mask slider).

I’m not sure how PL gives us the option to affect the deconvolution amount or precisely what it does. Can you help with more information?

So far, by experiment, I’ve found that setting ‘lens sharpness’ to 150% can improve the sharpness many of my Canon R5 and Leica Q2 images; sometimes by a lot. On the other hand, reducing the lens-sharpness below zero gives key textures/surfaces in some images (portraits) a subtle and very welcome smoothness. The PL manual says that negative settings will only moderate and will never cut the sharpening to nothing (at least, that’s how I interpret it).

Still, there may be an advantage, that I’m still exploring, in cutting the default ‘lens sharpness’ a bit to allow my other contrast adjustments (color, texture, global contrast compression using the curves adjustment) to play a bigger role in shaping the appearance of the final image.

Lens sharpness is specific to the lens used. DxO have put every supported lens and camera through their labs to measure the characteristics of each sensor and lens and then they produce body/lens modules to be used with PL when you develop your photos.

I don’t know the internals of these modules but I suspect it is DxO’s secret weapon for producing such good and sharp results. 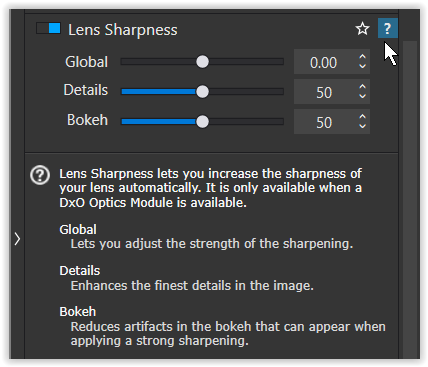 is DxO’s ‘secret sauce’ to make up for some lens softness – and is customizable
(different to FimPack5 Elite and PureRaw w/ an option).

PL supports most of those cameras & lenses I used since going ‘digital’ – and while it doesn’t turn
a mediocre lens into ‘brilliant’, “Lens Sharpness” was the reason to stay with (instead of ON1).
Additionally I enjoy the superb noise reduction.

Long story short – with “Lens Sharpness” applied, I don’t use “Unsharp Mask” at all, 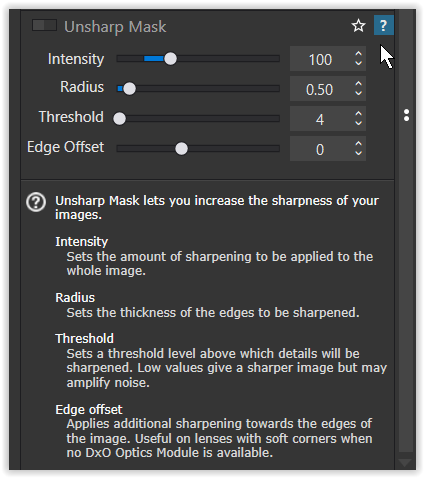 but look for global and local adjustments ‘to guide the viewers eye’ (e.g. brightness, contrast, sharpness, colour). – My goal is printing and ever since I use Nik Output Sharpener, which when properly (pre)set takes all necessary settings in account ‘automatically’.

The USM panel is only provided for those lenses that do not have an optical module and for RGB images eg jpg, tif etc.

DXO carry out extensive optical assessments in their optical labs to determine the precise optical characteristics of the lens. This information is used in PL via the Lens Sharpness panel to apply a variable amount of sharpness correction across the frame to provide capture sharpness, which in other raw converters is done using USM with normally a constant amount applied to the whole frame. A control is provided that allows you to customise to some degree where the fall of in sharpness occurs for your particular lens if it is significantly different from the DXO tested examples.

A control is also provided to limit the sharpness applied to out of focus areas which is normally undesirable.

DXO’s optical corrections are generally regarded as class leading and this comes from the company’s roots where lens optical testing was a major part of the companies activities.

Thank you, Keith. That explains the acronym. I agree with you about the PL modules.