I had never been very interesting in using the Nik Collection as I thought much of it paralleled other tools I had, but when Dxo integrated it into PL2 I decided to download it and give it an extended trial. I almost never do black & white images so 2 of the modules do not seem useful to me, but Color Efex Pro and Viveza seemed interesting. I do some HDR photography and found the HDR module to be pretty good, however my main questions are about Dfine and the two Sharpening modules.

In the time I have had the collection I have only been able to do some limited testing for the sharpening and NR modules and was wondering how others thought the modules compared to the built-in PL2 functionality. What limited testing I did did not show Dfine to be any better than Prime but, of course, it was considerably faster. Similarly I did not see any improvement in the sharpening functionality over the PL2 sharpening tools, but if others felt that the Nik tools were better I should give the tools a longer trial.

Hi Mike - - Some comments on the basis that you own & use PL (rather than another RAW converter):

These are my own conclusions on questions similar to yours;

You could argue that the Raw Presharpener functionality is not useful if you use PhotoLab’s Lens Sharpness module. In most cases I would agree because the latter uses a form of deconvolution (the Details slider), which is, I think, superior to USM-based sharpening when it comes to input sharpening. Two caveats appear, though: 1) sometimes the Details slider can provoke a watercolour effect for some camera-aperture-lens combinations; 2) the Lens Sharpness module is global, whereas Nik Raw Presharpener allows you to apply input sharpening locally (there are scenarios where this is useful). You can argue that PL2 does have localized sharpening slider, but you don’t have much control over its parameters, so it’s not as refined as it could be.

When it comes to the Output Sharpener it’s something that is missing in PhotoLab2 and I would appreciate it if that functionality got included in the Export functionality, along with some better downsizing algorithms (e.g. Lanczos).

There are some types of pattern noise (in particular, banding) that Dfine2 handles very well but PhotoLab and other developers cannot correct at all.

Thank you all for your responses. The small amount of testing that I have been able to do does make it seem that some of the Nik modules might be helpful when used with PL2, but I do wonder if there is any difference between the new Nik 2 collection and the previous Nik stuff when Dxo was giving it away as free software.

Other than the new integration with PL2 has anyone noticed any new functionality in the Nik 2 stuff when compared to the previous Nik Collection? Other than helping to support Dxo is there any reason to move from the free stuff to the not-free stuff?

When it comes to the Output Sharpener it’s something that is missing in PhotoLab2 and I would appreciate it if that functionality got included in the Export functionality, along with some better downsizing algorithms (e.g. Lanczos).

That sounds like a worthwhile request to add as a “Which feature do you need” topic in the DxO PhotoLab category … I’d support this.

Other than helping to support Dxo is there any reason to move from the free stuff to the not-free stuff?

That depends on your system/hardware, Mike - - If you read the release notes you’ll see that a number of issues with certain environments have been sorted out.

Generally, tho, there have not been any significant functionality changes or enhancements.

What DxO have been doing is a lot of “under-the-covers work” to clean it up in order to make it a solid platform for future development.

For me, this makes it worthwhile to support DxO in this process - by doing so, I will help ensure the ongoing “life” of the Nik tools, and I will reap the benefits as new functionality comes along.

What DxO have been doing is a lot of “under-the-covers work” to clean it up in order to make it a solid platform for future development.

How do you know that?

How do you know that?

Just by way of example … 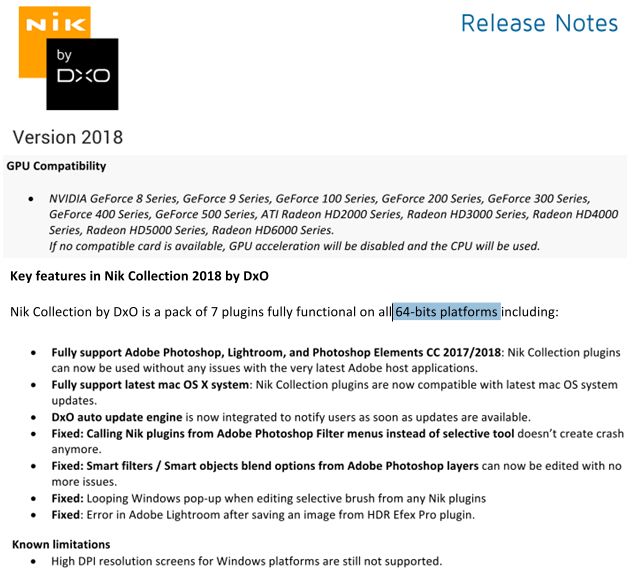 Just to be clear, as far as I know DxO never gave away the Nik Collection for free. Rather, it was abandoned by Google, which made it available for free. (It was previously a rather expensive software package.) When DxO took over development, the software was updated with bug and compatibility fixes and released as DxO Nik Collection 2018 (version 1.0). It got a version 1.1 update, then was repackaged with PhotoLab 2 Essential Edition, a new filter collection, and some more interface updates as Nik Collection 2. There’s a lot of confusion about this, but as John M indicated it’s all documented in the release notes.

There MAY have been some fundamental changes in the underlying code base. But there’s no way telling without looking at the code or talking to a developer. The tangible results so far are just ordinary maintenance.

I do not complain, that is the reasonable way to do it, especially since developers don’t grow on trees and they probably bought a mess of a fragmented code base. If they invested more than a year in refactorings with no visible outcome that would surprise me.

I am much more surprised by the presumption of the people here in the forum e. g. to judge on effort to change, build or fix something or to give DxO advice on their software development practices without having seen any details of what they are talking about. With DxO products I am a user. I can ask for features or complain about bugs and do my best to make clear what I want. But despite, or rather because of, I earn money with software development since 30 years I would never think I am qualified to tell them how to do their jobs.

Edit: just to be clear, @John-M, the last paragraph was not directed against you. I value your contributions here in the forum and would like to see more people stick to what this should be about: Supporting each other and make DxO aware of what their most engaged users like and dislike.

Just to be clear, as far as I know DxO never gave away the Nik Collection for free .

Dxo packaged the original Nik stuff, did some fixing and made it available for download without cost, at least until the latest version. If there is a distinction between that and “giving it away for free” I would be interested in knowing what it is.

No, Mike, that isn’t true. When Google handed over Nik to DxO, DxO did briefly host the abandoned, free download. But when they did some fixing, as you say, they released their work as Nik 2018 and it was not free. With that, the software became distinctly a DxO product and for-sale only.

However, Nik has never been free but it was given by Google.
If NC is free, it’s worthless !
Pascal

I totally agree with your point of view John.
I am happy some people think on long term achievement versus short term immediate delivery.
Time will tell us if we were right to be positive.

No, Mike, that isn’t true. When Google handed over Nik to DxO, DxO did briefly host the abandoned, free download. But when they did some fixing, as you say, they released their work as Nik 2018 and it was not free. With that, the software became distinctly a DxO product and for-sale only.

I don’t want to get involved in a semantics argument here, but I currently have the Nik Collection offered by Dxo on my backup Mac. The About lists Dxo Labs as the owner and gives the version number. This was offered by Dxo after some fixes, and it was made available for free. Since I generally do not use the Nik stuff (it does not offer me much more than what I get with other apps) I only downloaded and installed it on the backup machine because there was no cost.

This is not a case of Dxo “hosting” the download as Dxo did work on this collection fixes some issues and the display shows their name as the owner and an updated version number. And it was offered free of charge.

Thanks, Mike - I’ll take your word for it. If you’re sure that DxO added fixes to the initial release (and didn’t just rebrand it) before charging for Nik 2018 (v1.0), then I’m wrong about the history. That is not what I’ve been reading; but I didn’t use Nik myself until version 1.0 or 1.1.

All that I can tell you is that the About displays a copyright for Dxo Labs for 2000-2018, gives a version number and calls it the Nik Collection.

Interestingly enough it works with the latest PL2 version through the Nik Collection link in an identical fashion to the new (and costly) Nik Collection 2. I downloaded it because there was no cost, but I never used it much because (a) until recently PL (and OP before it) did not display updates when an export to an application was done and the image was changed, so there was no real point, and (b) I could see little reason for using it. I don’t to B&W, so I had no need for the B&W Nik modules, I already had NR functionality in OP and PL so I did not need Dfine and I was satisfied with the sharpening in OP and PL so I did not need the Sharpening modules.

It has sat on my backup Mac and not been used for more than a year now. That is, until today when I wanted to verify what I had posted.