If you look at the top-right corner of the PhotoLab window, you will see a Reset button. If this is active, the image has been edited, if not, it hasn’t.

Or, with the new palette features in PL4, you can simply click on the changes switch to see what changes have been made

I miss a variant of this: which images have edits that haven’t been saved to a sidecar?

The root problem for me is how infrequently PL exports sidecars with the automatically export preference. On Mac at least, it doesn’t seem to do so until you leave the image you’re currently editing, so if you work on an image for an hour and something catastrophic happens before you’re done, you have no updated sidecar and a greater potential for losing an hour’s worth of work.

This is different from the other editors I use, which write as you make adjustments: much more useful if you see sidecars as a more robust way of storing your editing (compared to the database, whose failure affects all images) and/or prefer to backup small sidecars instead of a large database. A sidecar weighs about 10K. My dopdata file is 30000 times that , so I know which one I choose to pickup in my (automated) incremental backups. I don’t typically edit 30K images per day.

So to work around that I export sidecars manually, but then it’s easy enough to forget even if you have some routine, and no way to see which images have edits that haven’t been saved. I have images in many folders (hundreds), while the browser can only look at one at a time (no way to select multiple for example, or recursive descent). I don’t want to have to poke around in every single folder to see if I might have missed something. If I could browser all images and filter then it wouldn’t usable, otherwise not so much.

Manual sidecar export is just painful though: there’s no keyboard shortcut and too many panels: first I’m asked if I really want to overwrite the existing sidecar (duh) and then I’m told that the write was successful (hooray!), neither or which I can opt out of for future exports.

Another alternative is to switch back and forth between the customize and library view to trigger a sidecar, but then I run into another UI irritant that I pointed out to DxO long ago: if you change the size of the film strip in Customize then that size is remembered when you return to that view, except if that size was zero; that is, you’ve hidden the film strip completely, which I prefer when working on a smaller monitor. In that case, the film strip comes back to life, and since there’s no quick way to hide it either (you have to manually drag it down), this ends up being just as painful as manual sidecar export. Undocking image browser has other issues

The whole browser just feels half-finished, but it’s been that way since PL1. I can live with or without the browser, but it’s all these kinds of usability quirks that never get addressed that makes PL less pleasant for me to use than my other editors.

Sidecar export?? On Windows, aren’t edits immediately stored in sidecars and/or the database? Seems that way to me, anyway. i’ve never lost edits, though theoretically that could happen since disk writes are often cached.

Sidecar export?? On Windows, aren’t edits immediately stored in sidecars and/or the database?

Don’t know about Windows, but on Mac it doesn’t happen until you move to another image or to the PhotoLibrary tab. If there is some other way to trigger it (aside from manual export), I haven’t found it.

I wonder if what @JamesWong is referring to, and which I would like to see, is an indication in the PhotoLibrary display, on each thumbnail. Today we can see pick/reject, star rating, PRIME/DeepPRIME, and whether the image has been exported (or is currently exporting). But I cannot see if I have touched any sliders.

I would expect the first time I move a slider or apply a preset other than the default, that an indicator would be visible in the thumbnail, and only removed if I use the Reset button. To put it another way, if the image settings differ from the default preset then show that fact.

I believe I already requested the ability to also filter by this indication. The fact of exporting an image may just mean I have bulk created a bunch of JPEGs for some purpose without spending time on edits, so using the “Processed” filter is not the same as “edited”.

Thanks for your sharing!

For me to avoid losing effort before sidecar file is generated, I will switch current image to another to force PL to write sidecar. Then switch back to this image and continue the rest of job. This works for me.

I have new findings. If an image is taken by a camera / lens combination which DxO has profile in its database (i.e. DxO Optics Module is available), a tick mark is shown on bottom-right corner of thumbnail when it is touched by PL.

What I expect to see is even DxO Optics Module is not available, some icon / indicator showing whether the image is touched by PL.

Will my wish come true in future?

The check mark displayed in the lower right corner of the thumbnail means the image has been processed.

I have new findings. If an image is taken by a camera / lens combination which DxO has profile in its database (i.e. DxO Optics Module is available), a tick mark is shown on bottom-right corner of thumbnail when it is touched by PL.

The tick icon is only shown once an image has been exported. It does not show if any adjustments have been made.

Like I said earlier, look at the Reset button on the top-right of the window.

If the image has been edited, it will be highlighted 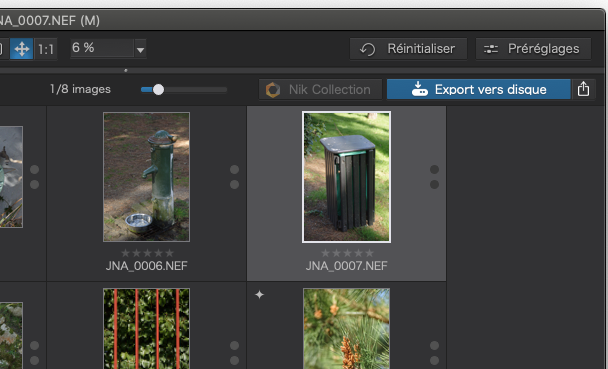 If the image has not yet been edited, it will be greyed out 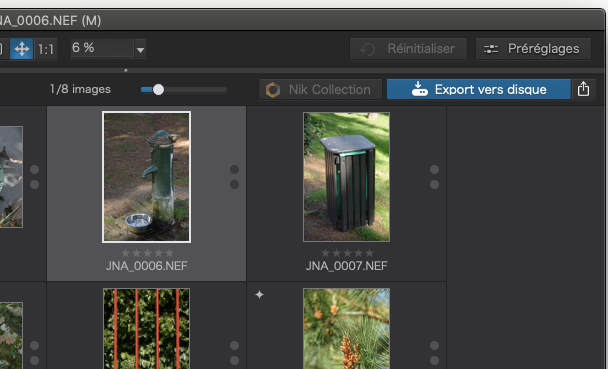 Thanks for your reply! Yes, you fully understand what I need!

Thanks for your correction!

Is there any filter in the image browser we could use for this purpose ?

No, but I think I added a feature request for exactly that. I will search for it a bit later.

in my workflow I use the traffic light for that. On import all files are set to red, the moment I start editing I set it to green. I am aware it is not “automatic” but it works well for me.

I misremembered. It was not my suggestion, but I supported it (and just realised I had not voted for it!)

Add filtering possibility to already edited photos Which feature do you need?

Sometime it would be good to see only the photos that were already edited inside Photolab (have a .dop sidecar if setting is used). It is clear to me that only a minor change can set a photo as edited (although simply viewing a photo with applied default preset doesn’t create a sidecar), nevertheless it can be useful sometimes.

Thanks for your reply!

In fact, I have more than one workaround to do it manually. What I request is a simple and auto way to achieve it. Being a software engineer, I don’t think it is difficult to do, it’s only the matter of “go” or “not go”.

Hi James,
I think you’re perfectly right: having an “already edited” icon in the filmstrip is something useful to let a user know if an image has already been edited in PL. This is something that we’d like to have in a near future.

Anyway, thanks for your feedback!

Thanks for your understanding and support! Hope it’ll come soon.

Our current filtering menu will undergo a whole transformation in a near future, and adding such option will make perfectly sense!