Why is Moire handling for neither of the exported JPGs as good as the PL preview at 75% ?

With such a tight pattern, you are always going to find moiré problems at some resolutions and at some magnifications. It is a fact of optical science.

Even if you zoom in to 100% and apparently correct it, as soon as you choose another zoom level, it may well return due to the pixel pitch of your screen conflicting with the interline pitch in the image.

On the other hand, if you were to print the image, I doubt whether you would see the problem since the dot pitch on a printer is much finer than the pixel pitch of a screen.

Moire is a thing that start to show if the image resolution is higher then the screen resolution and there are details which falls right between those two resolutions. the screen driver does downscaling at a certain patern and drops/delete details in that patern which causes those moire effects. (in the old day’s your tube tv did the same on tweed colberts of newsreaders now most have FHD so it isn’t an issue mostly, yes greenscreen errors are now like a cut off legs by bad choice of trousers )

When you zoom to say 75% you start to match the capability’s of the screen.
If you downscale the export to the screens resolution or at least 75% of it you will notice it’s gone.
i bumped in the same issue:

Where can i find more detailed information about exporting Jpegs out of DxO PL? DxO PhotoLab Windows

I suffering from some moiré kind of image problems. (did’t had this with former camera because less sharp and the developer application DxO does a extra effort of sharpening the lens input of my g80 plus lens. Which i like but it generates new boundery’s and challences. I don’t see those things (lining on fabric and brickwalls for instance) when developing on monitor. (1920x1080 native) Or edge lines of bended things whoom are not straight but has zigzag lines on FHDTV. When i zoom in it disap…

So buy a 8K screen and your problems are gone.

Thank you, @Joanna and @OXiDant /Peter … What do you make of my observation that it didn’t seem to matter (at all !) whether I had the Moire correction tool switch ON or OFF - when displayed at greater-than 75% on PL’s main preview screen ?

I find moire correction doesn’t work that well. Since I started shooting a 50MP FF camera with no antialiasing filter on the sensor I have shot a few frames that show moire pretty bad in Photolab. In all cases the in camera JPG processing has performed better than Photolab. Fortunately the number of cases is quite low.

i find the moire tool also doggy. it seems that the moire is tackled at base also. But in general the slider isn’t strong enough to suppress large amounts of moire. then you need to turn down sharpnes/microcontrast/ and general contrast.
i am not a technician in moiretools but i am suspecting that when you move the slider to active you shift a certain raster around which can be moved to select the less moire causing pixels as jpegpixel. and things like microcontrast, which is detail enhancing, is dealt with. if you turndown microcontrast/make it negative it’s moire is dropping also.
so i am ignoring moire watching on screen and think in the future it’s gone due 4K/8K screens. no need to sizedown or change sharpnes of the file if it’s for home use.
lensmodule has a auto microcontrast setting to sharpen the image of that lens.

I have only tried the Moire tool a couple of times on files from cameras other than my own(generally I have no problems with moire). I have not found the Moire tool to be effective at all, either in the preview or on exported files.

My G80 has no antialiasing filter for more sharpnes kind of bargan for the 16MP sensor to keep up.
the moire is only preformed in export i suspect. Creating Tiff or Jpeg.
So preview on screen is useless.

Just a sidenote: Moiré is the reason why people on TV have worn clothes without stripes for decades…

So preview on screen is useless

100% Zoom should preview the Moire reasonably well. Deepprime does seem to affect how it ends up in the output file too. So I sometimes use the DeepPrime preview window to preview the final moire output. It kind-of works… Well the Moire tool doesn’t but the preview does.

That was about resolvingpower, of writing 256 lines in tube at 50Hz. Not enough to get those details visible.

@MikeR
O that could be true. But suppressing moire and previewing this in dxo is a kind of weary not very structual clear.
As in when i see it in export i fiddle with microcontrast settings and keep anti moire slider as default. Works faster imo

As @Joanna said, the effect is visible due to the resolution difference between the image data and the display medium (screen).

The only comparisons that make sense are 100% scale views of the image at the same output dimensions on the same device. If you introduce any scaling at the viewing end (by viewing anything, say, at 75% of full size) you are potentially re-introducing the problem.

In other words, if your screen is 1080 pixels high (and you can use the full height of it) then output the image at that height using various settings, view those at 100% and then discern the differences.

For PhotoLab it would be interesting to understand how the Moiré is being addressed. I would assume it is being treated at the native resolution of the sensor, but does the export scaling also have any anti-Moiré processing in it, either related or not to the setting in the adjustments?

does the export scaling also have any anti-Moiré processing in it, either related or not to the setting in the adjustments?

I suspect the image is processed and moire reduction done at the full image resolution and the image scaled at the final step with a high quality resize algorithm that doesn’t exacerbate the moire.

the effect is visible due to the resolution difference between the image data and the display medium (screen).

For best result, you should tweak your image for (not at) the resolution needed when your image is used.
It’s the same for sharpening and even denoising (some time no need to denoise if noise is really small at used resolution).
This is really true with high resolution sensors.

I generally don’t scale down my images in photolab.
I use softwares which allow to fine tune sharpness as needed (not with only one slider).

reproces in pl5.
step 1: my preset base setting.
step 2 4point perspective and a small tilt of -16 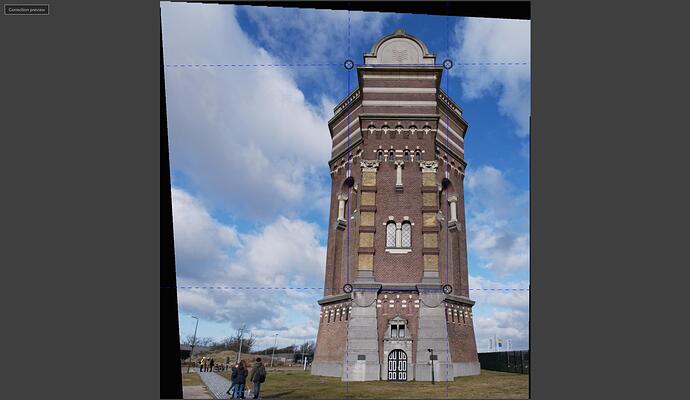 step 21906×1106 151 KB
For moire a provoking action because you re- arrange pixels and thus detail edges on the “grid of resolution”.
step 3 crop and set exposurelevel: the pole on the left is too tilted to keep inside so cropped out.
Watching this on 2K screen i have no classic moire.
except this: ghosts in the briks and X patern showing. (screenshot 70% zoom) 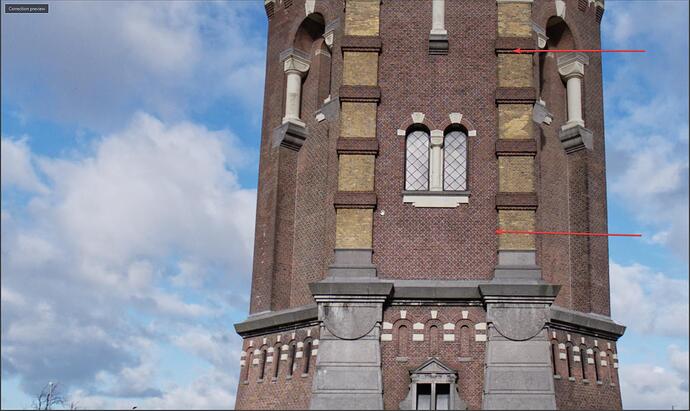 before after: (not over processed.) 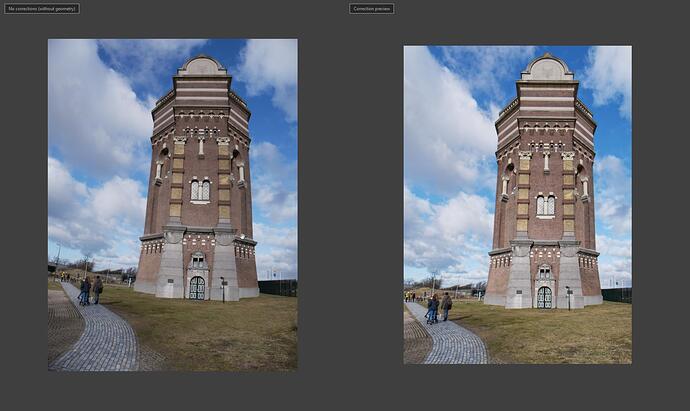 step 4b1906×1138 179 KB
decided to add some fine contrast (20) to detail the foreground more and correct the downfall of luminancefeeling(if contrast is added you lower luminancefeeling, it’s looks darker) by adding 10% exposure +40 to +50.
(moire provoking?)
denoise deepprime default
right time to export.
(on my 2k screen i see no issues which should worn me to be carefull)
1 with anti moire: 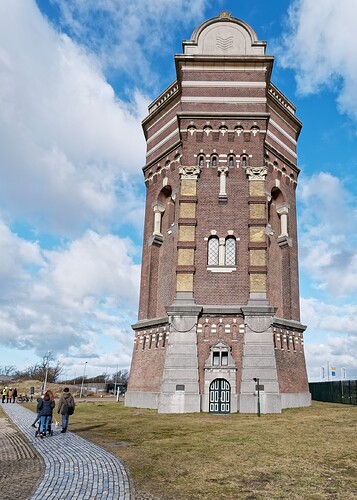 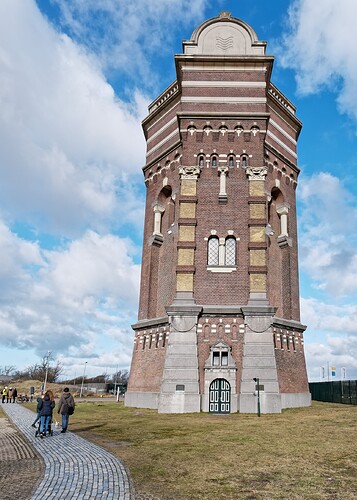 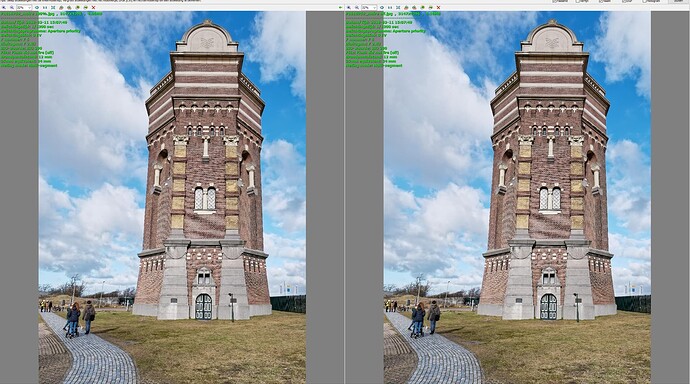 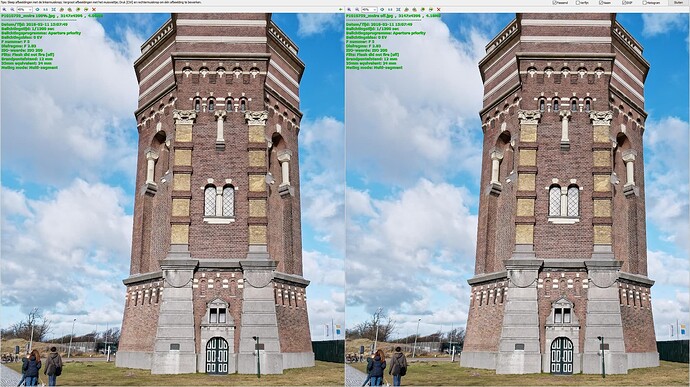 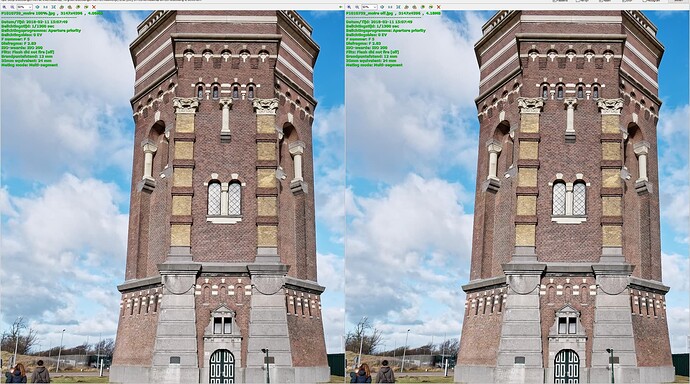 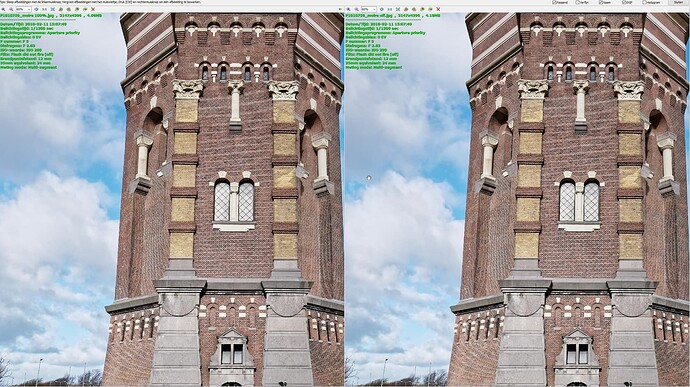 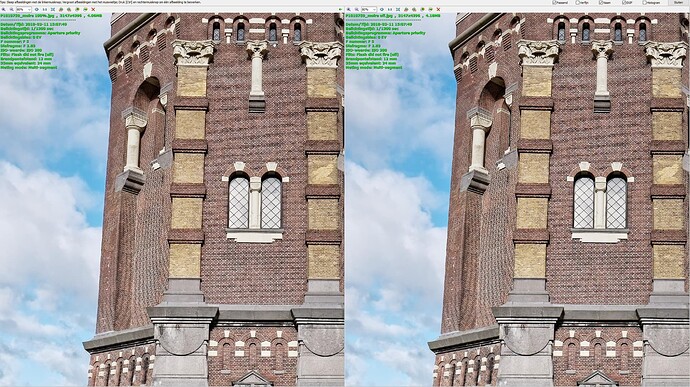 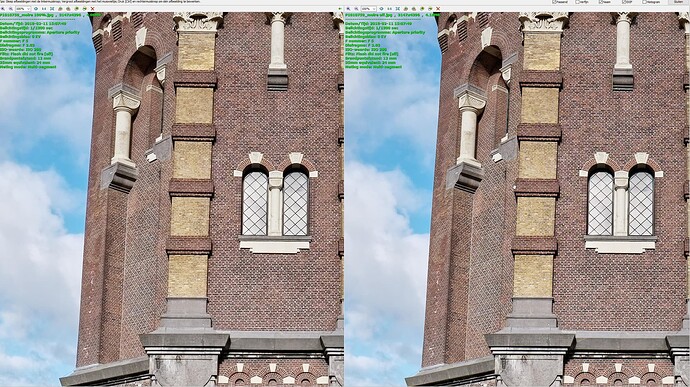 if anyone sees any difference between 100% on (left) and 100% off (right) please tell me. i can’t
So i think the anti moire thing is broken, kapoet, stuk, out of order…

step4 clearview plus ( level+15) to flush out the moire dangers.

What’s this tip ? Can you elaborate ?

Clearview plus does drop microdots “intelligent” on the edges of structures and forms.
It enhances lines and thus details.
By using clearview you enhances, provoke by the adding of sharpening microcontrast, any posible moire reaction.

I can soften the image by turning off clearview and use finecontrast as less agressive saturation/sharpening contrast which holds moire more out the image.
I my example i wanted to push moire visible to show the total lack of difference in on and off.

Microcontrast is the way to edgeout details, it drags out lines by adding blacks in microdots. At the same time it causes at resolution level harser differences between pixels which can cause in certain paterns moire.

Thanx for your explanation.
I don’t use often clearview, but, indeed I found it sometime usefull at 5 or 10 % to increased a bit perceived sharpness.