I’ve read through the handful of PL related topics opened about the Miniature effect and turning it off. I have read that maybe it’s not buggy because there are ways to turn it off like going to the Miniature Effect in the Viewpoint group of the Palette. But…

I recently upgraded to PL5 and added Nik, FP and Viewpoint to my licenses. I was testing with an old image just trying out new things. I spent a little time using the “repair” tool to remove some brightness on the horizon of a shot. Used local adjustments gradient tool to darken the foreground of my image. Then saw a button with two parallel lines (the Miniature Effect, it turns out) and thought - oh - I can easily adjust my gradient, but I was wrong. So I tried to undo my change as I normally would (via Ctrl-Z, etc) and I could undo other changes, but not that one.

A search of the forums told me how to turn it off, and that works. And suggestions there may be a bug here were dropped, over the past couple of years, not necessarily in this 5.1.1 version specifically, so I suspect this perceived bug has existed for some time.

In order to demonstrate what I am describing as a bug I created a short video. Sorry if the audio is bad - my first pass I didn’t realize it was recording audio at all, so I started over and narrated. Any quality issues are all mine. Miniature Effect in DXO PL 5.1.1

Thank you for the report. Could you, please check if the preview (when you have this issue) gets updated when you zoom in/zoom out the image?

Observation: The sequence I used to get to the miniature effect this morning may have been a little different, the first time. When I turned it on, I did a Ctrl-Z (undo) it it went away. Then I did Ctrl-Z all the way back to original photo. Then did a redo (Ctrl-Y) all the way back to the pre-miniature effect, and no issue. Then I clicked the bigger “Local Adjustments” icon at top right, and with it highlighted, I clicked the Miniature Effect button beside it and then the “bug” appeared to behave as documented before. Screenshots below.

As an additional detail. If I close PL at the point above where I’ve undone all changes (except apparently miniature effect), and reopen PL5, and go to the image, here’s what it looks like (only change is ‘default preset applied’. 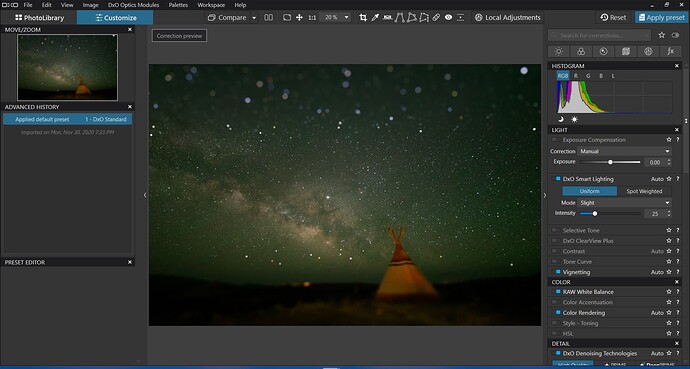 From your first screenshot, the Miniature effect item is still checked. Have you looked in the palettes on the right to see if it is checked there? Undoing might have reset the effect to default but not deactivated it.

Have you looked in the palettes on the right to see if it is checked there? Undoing might have reset the effect to default but not deactivated it.

Oh, it definitely is still checked there. I get how to turn it off. I just think the undo action should do it - especially if I have undone ALL other edits at the same time. The first time I did this, I didn’t realize there was even a ‘viewpoint’ panel as I had just activated that license and it was not in my customized layout. But after having to start over on an image, closing the app and reopening and having the original image show up with Miniature effect, THEN I searched the forums and found that answer.

Again - there are ways to turn it off, but I am only reporting this in the context that I think (thus perceived bug) that I should be able to undo the application of it.

From your first screenshot, the Miniature effect item is still checked.

Better example in this screenshot. I have undone it (see history) but obviously still present. 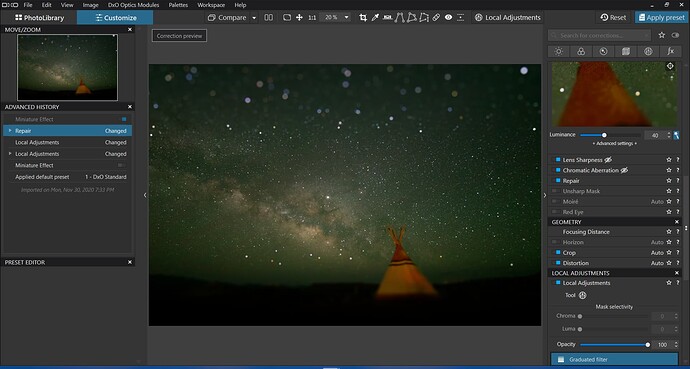