Unfortunately, the implementation of the tone curve in PL is missing a couple of very useful features that would make it easier to use – a histogram overlay and a targetted adjustment tool. Hopefully DxO will add these in an update.

The Tone curve is a very interesting and versatile tool.
In November last year, I suggested to have a histogram overlay in the tone curve (which would make it a lot easier to working for those who use this tool). In fact, it should be “underlay” rather than “overlay”.

What is a “targetted adjustment tool” ?

N.B. This is not only for Macs but also for Windows

I vote for that

Of course, the tone curve gives you much more adjustment capability than levels.

What, specifically? The only additional adjustment capability that I can see is the ability to adjust the individual R, G and B channels and I think that capability also exists in tools like CaptureOne. What other functionality is there in Tone Curves?

If you’re not comfortable with the tone curve

Oh, I am comfortable enough using it, and it seemed to me that it allowed me to make the same histogram changes that levels did, but I thought that perhaps there was some difference. I am relieved to find that there is not.

What is wrong with using the existing histogram? Why do you need an overlay or and underlay?

I just added the Tone Curve adjustment under the histogram and use them together.

Here’s an example in which I have adjusted an image only using the tone curve (and WB). Have a look at the curve settings:

WB was used to get b/w, I could have done this with the style/toning tool too.

I just added the Tone Curve adjustment under the histogram and use them together.

I imagine you moved the tone curve to the left hand side as I did. That’s perfect way to make the Tone Curve much more useful. PhotoLab should come out of the box with that configuration. Straight up Levels would be a nice add as well. Perhaps Levels could be part of the histogram itself.

I imagine you moved the tone curve to the left hand side as I did. That’s perfect way to make the Tone Curve much more useful. PhotoLab should come out of the box with that configuration.

Yes. That is exactly what I did.

Straight up Levels would be a nice add as well. Perhaps Levels could be part of the histogram itself.

One thing level curves are incredibly useful for is identifying even the smallest dust goobers on your sensor. To do this for a blue sky background, for example, activate the tone Curve adjustment and place a handle about 1/3 of the way up the diagonal line and pull it upwards to appoint slightly above the mid horizontal gridline. Next, place another handle two thirds of the way up the diagonal line, and pull downwards to be low the one quarter horizontal grid line. The result will be an orange sky with despots standing out as bright white objects against this background. Using the healing tool, you can very easily zap all of these, and paste them to all images in your workflow.

Backgrounds of other colors require different manipulations of the curve, but all are basically two handled operations, and simply playing with it while viewing the preview will reveal a combination that highlight your dust spots. Once you have zapped all of your despots, simply turn off the tone curves adjustment and your image will return to normal.

Hope that this helps.

P.S. I have come to DxO from Apple’s Aperture, so I agree let the tone curve superimposed over a histogram would be helpful because you can see the effect that your adjustment is having on the appearance of the image as a function of color channels all in one place. It’s not really a big deal, but I had gotten quite used to it.

The tone curve can sometimes provide the levels kind of adjustment. however you cannot recover highlights with the tone curve. There is no way to adjust the curve ABOVE 255. Your RAW file will have 1.5-2.5 stops of information above 255 (more or less depending on other adjustments) but there is no way to access this. If you pull the maximum level down it just clips. This is really useless.

Here’s a feature request you can vote for if any others are still interested in this:

In the LIGHT panel, ot would be helpful if there were a Levels adjustment, in addition to the Curves adjustment that is there.

Beware: The tone curve’s horizontal axis is labeled 0 to 255, but these values just stand in place of whatever range a camera offers in its raw image file.

My EOS 5D Mark III delivers values between 0 and somewhere near 14’000, but black level is at 2048, so 0-255 corresponded to (the most significant bits of) the range between 2048 and 14’000… Black- and white levels can vary too, and the camera writes the respective values into the file’s metadata fields so that an application can interpret input data sensibly.

Yes. The point is the curves doesn’t allow any access to what DXO currently views as 255.

There’s a feature request which may be of interest to those here:

I’m not sure if I understand you correctly. 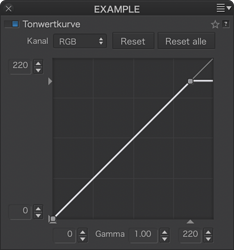 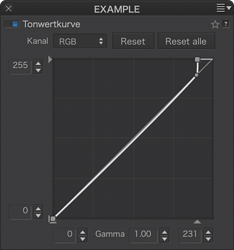 Here’s a couple of raw image histogram of shots with clipped highlights. Clipped highlights display as y=255 in DPL, whereas the value in the camera file is way above “255”. Check out the values for black and white in each of the histograms, both are translated to 0-255 in DPL. 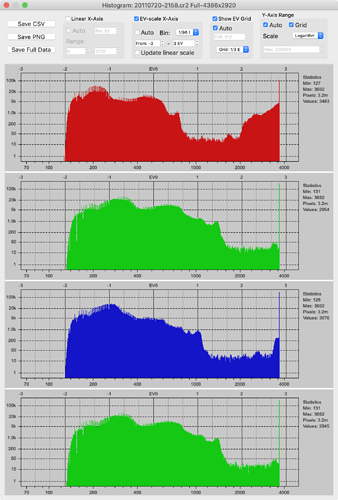 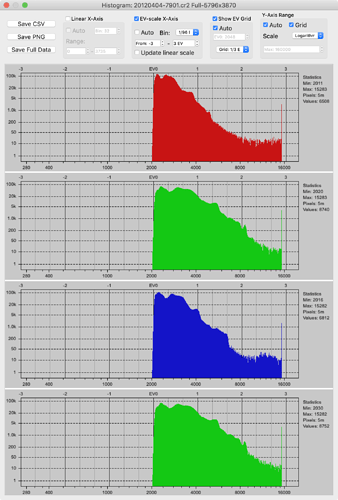 Note: Different cameras present different values for black and white. Even different models from the same brand do.

You can do it with exposure/contrast you can recover those highlights with selective tone.

Try to recover those highlights as you would with levels by using the tone curve. You can’t. The tone curve doesn’t pull levels down from the raw file above the JPG clipping point.

I want to be able to recover those highlights with a levels tool. Not with selective tone.

@MikeR, with ALL channels in your raw file at maximum (R 255, G 255, B 255), there is NO more information except pure white – NO chance to recover anything.
When bringing down the clipping point you get a certain degree of grey, but no texture.

You’re missing the point. When you bring a raw file into DXO DXO renders it similar in brightness to the JPG file. Values on the histogram and on the tone curve from 0-255 represent the current rendering. The raw file actually goes to 1000 or 1500. Or some number well above 255.

Are you familiar with Fast Raw Viewer or it’s siblings?
If you know the tested DxO mark DR you can see if there is clipping present.
Most have around plus 2 stops headroom against ooc jpegs.
If you have filmpack elite then move contrast highlight and selective tone hightlight the same level.
Much less grey blotches.

Exactly. Simply moving the highlight slider to the left shows there is detail above 255 in the RAW file. I simply want to be able to recover that with a “levels” like tool.

You’re missing the point. When you bring a raw file into DXO DXO renders it similar in brightness to the JPG file. Values on the histogram and on the tone curve from 0-255 represent the current rendering. The raw file actually goes to 1000 or 1500. Or some number well above 255.