I want to use DXO PhotoLab 6 together with Mylio, which I use as the catalog for all my photos. My plan is to use labels in Mylio to mark photos that I want to edit in PhotoLab. But for some reason PhotoLab doesn’t recognise all photos with a label set in Mylio.

Two screenshots that illustrate my problem, the first showing 11 photos with the Green label in Mylio and the second a search for photos with green label in PhotoLab – with two photos missing. 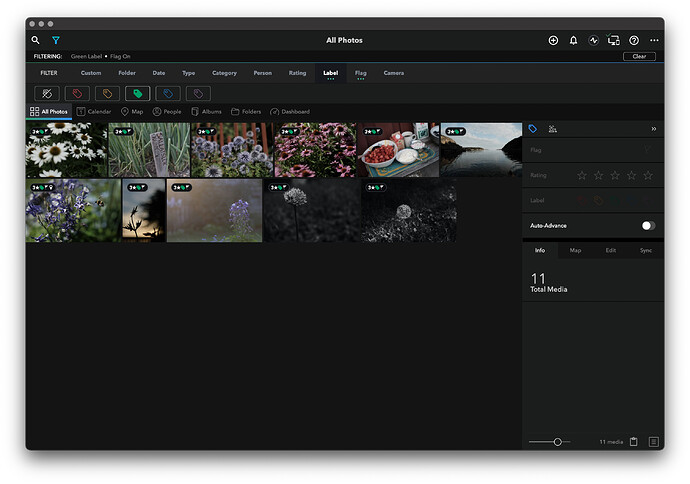 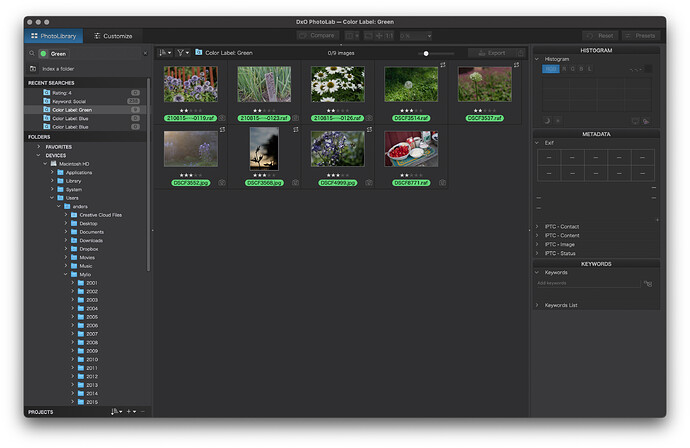 And since the green label is set in the XMP file, is guess the problem is on PhotoLab’s side?

Do you have any filters set in PL, as well as the search?

No, no filters active.

Read more about it towards the end of this page: Image Evaluation and Control - TuTo DxO

Thanks! But it doesn’t make any sense that they transfer over between Mylio and DxO for some photos but not others?

But it doesn’t have to be color labels I use. All I need is a way to select photos to edit in Mylio and have an easy way to find them in PhotoLab. What metadata would be my best bet?

With Photomechanic and my setup of PL I do not sync the metadata from the PM ratings automatically - if I change the colour tag in PM I then have to “Read from Image” in PL. Look for a squiggly top right in the thumbnail

This is how I have configured PL to work with sidecar files. Can’t understand why some labeled photos are picked up by PL and not others.

Can’t understand why some

It’s all in the interpretation of the label field. If it does not contain exactly what the app expects, the app will do whatever the programmer has implemented for such a case.

What is the filetype of the files where the label from Mylio is not showing up in Photolab?

Be aware, that for JPG files, Mylio also uses an XMP sidecar and this is a non-standard behaviour.
You can write the labels to the files themselves by using “Photo - Save metadata to file” on the selected files in Mylio.

This is how Lightroom and PhotoLab write colour labels

As we can see, xmp:Label is written in different contexts, but both DPL and LrC can cope with that. The issue is, that LrC writes localised text, while DPL uses English instead.

I use Mylio and PL together exactly how the OP desires, and Mylio does use XMP sidecars for Jpegs as @bekesizl says. I find that the filter in PL sometimes needs to be reset to show all before it will show previously excluded images.

Update: I wondered about localisation too - but the sample XMP in the OP’s post has the label in English.

I have feelings that Star rating are most huassle free way of doing what you want.

Thanks! But it doesn’t make any sense that they transfer over between Mylio and DxO for some photos but not others?

@thoresson Agreed either all “green” labels should come across or none! But I am confused by the snapshots which certainly show 2 images missing but also show different ‘Rating’ values for some images, i.e. ‘Rating’ = 2 rather than ‘Rating’ = 3!?

In addition, can you please clear up an issue with the snapshot of the PL6 screen because it shows “S” icons on 5 of the images but you show that you are using AS(ON) or MS(ON) etc. to automatically synchronize the metadata and you should not get the ‘S’ icon in such a situation but the metadata should auto update instead, I believe - UPDATE but not in light of what happens at the end of this post!? 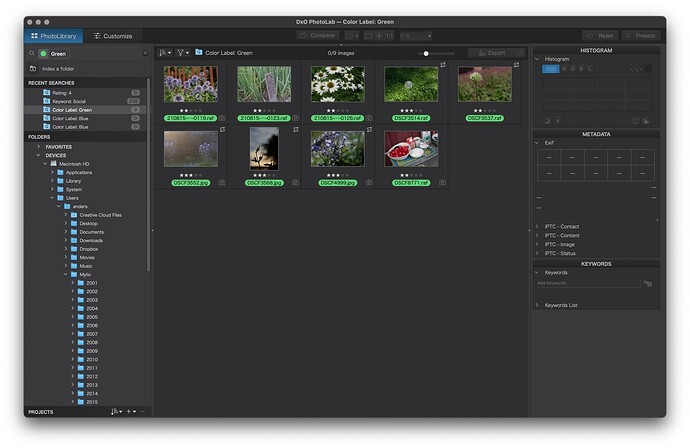 I have feelings that Star rating are most huassle free way of doing what you want.

@KeithRJ You may well be right but it appears that the ‘Rating’ field is already being used for the images in question!

I find that the filter in PL sometimes needs to be reset to show all before it will show previously excluded images.

However, I believe that @thoresson got his 9 entries via a search on ‘Green’ and the following is a snapshot of the results of a search on ‘green’ (not ‘Green’) when only 3 of the images were ‘Green’.

I then changed the last image to ‘Green’ from ‘Yellow’ and the image shows up because it is in the same directory as the other 'Green’s but the search count is still only 3 (AS(ON) was set for this test). 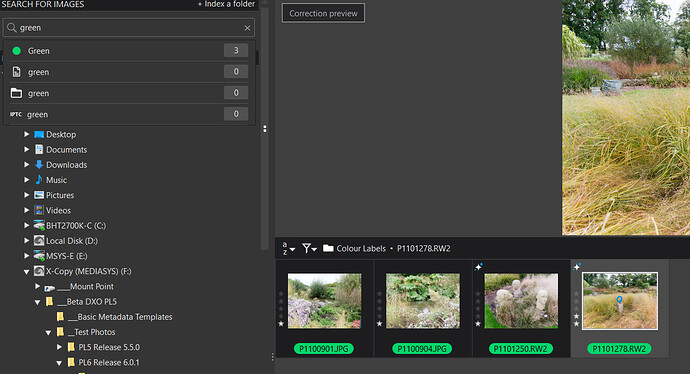 Entering ‘green’ again left the count at 3 but entering ‘Green’ changed the count to 4!

However, if all images were not in the same folder @thoresson then PL6 will only know of their existence or, in my case, a change to the colour of an additional 5 images I added in another directory if that directory has been discovered in PL6 and re-discovered after any metadata change, i.e. DxPL only makes changes to the database after it has re-discovered a directory where those changes have been made not immediately after any such change.

The ‘Automatic Synchronisation’ only actually happens when a directory where such a change has occurred is once again selected by the user. DxPL is not monitoring every directory to keep track of all the changes that may be occurring in real-time, “out of sight” means “out of scope”!

But if I change 4 images in the other folder

It is way to late to continue tonight, sorry this morning!!

I hadn’t noticed that the scenario was the result of a search rather than a filtered photo view. I really shouldn’t reply to posts using my phone!

I think there are two things in play here: (1) Mylio doesn’t set labels on the JPEGs until you tell it to, as @bekesizl pointed out (because it’s primarily an asset manager and wants to preserve JPEG originals untouched, just like raws), and (2) PL’s automatic XMP sync doesn’t happen unless the folder is open in the PhotoLibrary tab, as @BHAYT pointed out (and I see the same, now that I look).

In my usage, Mylio and PL work well together because I mainly work with raws, and I have the folder open in PL when I make changes to ratings or labels in Mylio (and I do use labels to identify images to work on as the OP wanted to). I rarely do searching in PL. The only wrinkle is that Mylio ignores PL’s DOP sidecars at present (but they know we need them preserved properly).

The main issue behind any use of the xmp:label metadata tag is that it has been misappropriated, from being a purely textual tag that can hold any text, to something that only holds a limited range of colour names.

And, to compound problems, each DAM writer seems to use it in different ways. Some localise the colour names when writing them to a file’s metadata, others don’t. Yet others allow the user to specify whatever text they want to associate with a given colour.

Far better is the Apple idea of Finder tags, which are a structure that contains both a numeric value (representing the colour) and an (optional) text value. If the text is not explicitly assigned, then it is read as a localised description of the colour and all the user sees on the file in Finder is a coloured dot. Multiple colours and/or text can be assigned to a file. The Spotlight search mechanism is constantly updated whenever the operating system is running and searching is fast and efficient, as well as defaulting to searching sub-folders of the search target.

Until the “big boys” of the metadata world (e.g. Adobe) are prepared to stick to the standards they helped create and not abuse the xmp:label tag, exchange of colour tagging will always be a mess.

I hadn’t noticed that the scenario was the result of a search rather than a filtered photo view. I really shouldn’t reply to posts using my phone!

@Aearenda Neither did I initially, until I investigated the screen even more after I started writing the response! Just like you I thought the display was in response to a filter but the filter would be on a single directory whereas a ‘Search’ spans the data in the database at the time of the search i.e. it can span a number of directories.

The test then showed me a circumstance with AS(ON) whereby the ‘S’ will occur because the directory has never been “in scope” since an external metadata change has been made, i.e. there has been no “opportunity” for DxPL to “discover” the changes and either update DxPLdb or signal a conflict with the ‘S’.

I have “moaned” about the lack of a “global” synchronise in the past @Musashi but also understand the reality of checking every directory in the database for potential metadata changes!

This does not necessarily answer the question about @thoresson’s missing entries but the ‘S’ icons on the snapshot first alerted me to some “incomplete” or “changed” state that would always need to be resolved before an accurate picture of the circumstances of the “loss” can be understood, i.e. Anders please tell us what you did that resulted in the ‘S’ icons and please check via navigation if the “missing” images are in the database (except that they will be immediately you navigate to that directory - doh!)

The main issue behind any use of the xmp:label metadata tag is that it has been misappropriated, from being a purely textual tag that can hold any text, to something that only holds a limited range of colour names.

@Joanna you may well be right but that is not the issue here, 9 entries that had been marked as ‘Green’ made it successfully and according to the snapshots 2 did not, rather than no ‘Green’ labels were seen at all!

I had to amend FastRaw Viewer to use the colours instead of colour “representations” in FRV which were to be placed in the metadata labels. IMatch goes to “huge” lengths to provide a myriad of alternatives and DxPL just uses Colour!?

Even what I have written above may not cover the issue but the snapshots are “suspicious” and we need the whole story to be able to accurately “guess” and reproduce the problem, which is always going to be difficult for me given that

But I learned a lot playing with the ‘Search’ function and yes I did know about the “out of scope” issue but didn’t understand the potential implications with something like the ‘Search’ because all my testing is by navigating to a directory of interest!

Interesting! What do you mean with “reset”?

My 11 photos are from three different folders. The two missing in PL are in the same folder as the ones that are found by PL.

And yes, pressing the S got the ratings updated in PL.

Yes, this seems to be the issue! I was using the search functionality. When opening the folder, the missing green labeled photos where there, with the S. Pressing it synced the photo’s metadata and the green label appeared! Works for both jpegs and Fuji RAFs for me though.

So the problem isn’t in the XMP files being shared between Mylio and PL, but with PL doesn’t picking up on the changes the way I expect PL to do. But one thing is strange: Why did PL notice that some XMP sidecars were updated but not others? I hadn’t opened any of the directories, only used the search.

With this sorted (thanks a lot @Aearenda and @BHAYT!), next step is to figure out a working solution for me. The photos I want to edit are in different folders, and there is no way to have PL display all photos from a folder and all it’s subfolders right?