Is NIK useless as a non-destructive plug-in to PL?

While using NIK as a PL plug-in gives you access to “non destructive editing”, it seems to be really close to useless. If, after using one NIK plug-in, you do anything else in PL or use any other NIK plug-in, the first NIK plug-in can no longer be accessed.

Basically the non-destructive editing seems only to give you a second chance to do NIK editing (in the same plug-in) if you happen to get back to PL and notice an issue that you didn’t notice while in the plug-in. Then you can go back to NIK and pick up your editing.

This seems really limited and the workflow seems easy to duplicate using NIK as standalone components,

Am I missing something?
Greg

While it can be a useful feature, you are correct. It is limited and not really nondestructive editing in the sense that I have always understood the term. It is an unfortunate case of marketing hype that I commented on when this feature was first introduced. This feature should have been called something else. I use the Nik plug-ins often and with great results, butI rarely use the “nondestructive” feature .

Nik filter can only work with JPG- and TIF-files.

The ‘non destructive editing’ mode for Tif-files, which doubles the file-size btw, is meant for the last Nik Filter you used → description in manual pdf p.89

In Color Efex this also works, when you added ( → ) another filter module. 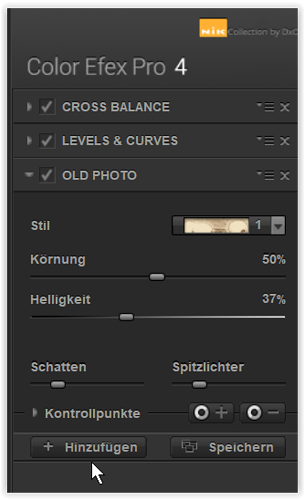 Am I missing something?

My normal workflow with SilverEfex is to general geometry and exposure corrections in PhotoLab and then take a good looking “negative” out to SilverEfex for conversion to BW. When I’ve experimented with ColorEfex I did it the same way.

I can’t imagine using multiple Nik plugins in any sensible workflow.* Hence, only a single Nik plugin allowing non-destructive editing seems like a reasonable limitation to me.

How and when do you find yourself wanting to combine Nik plugins?

*Exception for HDR of course (I don’t do HDR in Nik or do much HDR generally, new cameras have so much dynamic range I rarely feel I have to use multiple exposures).

The geometry correction that’s built into PL seems very limited, so I use NIK for that. Then Viveza or SilverEfex. Of course there’s no claim to non-destructive editing in Perspective Efex, so not really an issue there. I’m just starting out and don’t have a set workflow, so sometimes experiment with combinations of Viveza and HDR and Sharpener, etc.

I’m delighted to know that if I don’t make any changes after going out to SilverEfex I can go back and edit the same image non-destructively. What looks like a limitation from your perspective looks like progress from my perspective.

Definitely see though how it would be nice to still be able to tweak SilverEfex output and yet go back non-destructively the original in SilverEfex. In this case, PhotoLab would have to retain the post-SilverEfex settings as a hidden preset and reapply them automatically after each re-edit. This doesn’t sound too challenging technically and doesn’t require any additional interface – you may get your wish.

just did an experiment

well, that’s not the solution you are looking for – but it was fun

I guess that’s like saving a bunch of PL edits and re-applying them to a different photo?
Thanks for the insight…

Seem DxO need to introduce “layer” in PL so there could be more adjustment done, also using different nik plugins.

DxO need to introduce “layer” in PL so there could be more adjustment done, also using different nik plugins

If layers are introduced, it will hopefully be without a huge performance hit. I would hate to give up speed of preview rendition or fluidity of slider adjustment in exchange for layers.

It occurs to me DxO may have reached that inflection point in a software’s life where new features just make a product more complicated but not better. Microsoft Word hit that point with Word 5.1 on Mac OS 7 in 2004. Microsoft only managed to make Word harder to use and more annoying and greedier with system resources after that.

I think they just need 1 palette like the one for local adjustment palette but that’s where layer would be. I don’t think that would affect speed more than local adjustment does, also that would make using nik plugin non destructive as you could go back in it from that layer (if they nailed it and that plugin re-open with all the tools that were used).

The integration of NIK with Photolab is a non integration that’s not a bit better than with NIK and Lightroom. I think DXO shall turn NIK for Photolab into a real RAW-based plug in instead. Making the detour over TIF is like going over the river after water.

this new plugin is for those not using VP

The geometry correction that’s built into PL seems very limited, so I use NIK for that.

The geometry correction provided with the Nik tools was derived from DxO’s ViewPoint product - If one owns both ViewPoint and PhotoLab then VP is fully integrated into LP, and you get the benefit of being able to apply your geometry corrections before doing anything else (which can be an advantage).

In which case, you may be interested in this … and this.

Still it leaves you with a much much sub optimal work flow. View Point doesn´t cost a fortune and it´s a perpetual license rarely updated so far that really integrates completely seamless with Photolab. Have you tested the trial??

I have VP, and still running nik v2 as I don’t see any advantage (to me) to upgrade nik to v3 or now v4.

DxO need to introduce “layer” in PL so there could be more adjustment done, also using different nik plugins

This is how Nik Color Efex and Capture NX2 worked together. AND, you had the option of how to blend layers (normal, screen, overlay etc).

Lucky you! You missed the fad where everyone was overlaying Bleach Bypass and the Monday Morning effect!