After migrating from PL4 to PL5, I was poking around at some older files I had processed in earlier versions of PL. By earlier, I mean PL3 and earlier. I hadn’t touched the files in years.

Some of my older files have lost rankings. I can’t determine the pattern yet, but it seems to be anything before somewhere in one of the PL3 builds.

Losing rankings is not a terrible problem, but it’s definitely a pain, and it leads me to wonder what else might be missing.

Is there an official policy on what image edit properties are supported across the different versions of PL?

ETA - With the same folder open in both PL4 and PL5, side by side, the image rankings appear properly under PL4 but are missing under PL5.

Why are they not carried forward?

ETA 2 - It’s worse than I thought. Files I edited last summer with PL4 are missing their rankings.

Some of the older rankings are being carried forward, and some are not. It’s maddeningly inconsistent.

Is anyone else noticing this behavior?

I just ran a test, rating images in DPL2, then exporting sidecars manually.

attn. @StevenL
It looks like PhotoLab is not updating properly on DB import and when the indexing function is used, leaving the suspicion that other items might be lost in the process too…
I expect that DB import (on first app launch) and folder indexing should read and update the rating (as well as everything else that has been set, also by earlier versions of DPL.

Just a thought. Ratings are stored in the database. When using e newer version of PL you use a different database. I think, not sure, in PL5 they are stored in XMP files and therefore transferable.
The same with keywords.

Ratings are stored in the database.

Yes, and they are exported to the .dop settings files too. 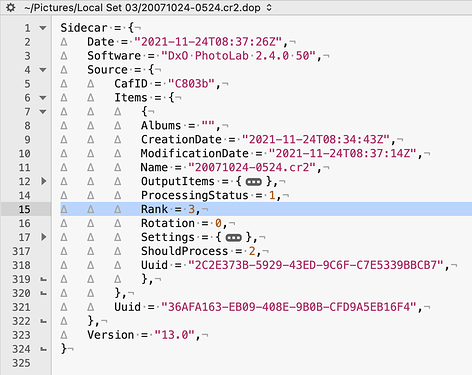 Note Rank is from PL4 and before, this has changed with PL5 to Rating

Thanks for all of the replies.

To separate out the twin issues of database and sidecars, I’m going to focus first on sidecars, which are easily debugged. The core issue seems to be this: In PL5, the parameter “Rank” (as generated by PL4 and earlier) is no longer recognized in sidecars, and has been replaced by “Rating.” If true, this is unfortunate.

As for the database, I can’t see into it without spending a lot of time digging through the schema. I don’t even know what image files I have in there, and since they move around on my hard drive (as part of workflow) the path references are probably broken anyway.

Formerly, the rules hierarchy placed sidecars above the database, which was more of a backstop. Is this still the case?

The core issue seems to be this: In PL5, the parameter “Rank” (as generated by PL4 and earlier) is no longer recognized in sidecars, and has been replaced by “Rating.” If true, this is unfortunate.

It has been my experience that PL4 files that contain Rank are automatically updated to Rating.

In PL5, the parameter “Rank” (as generated by PL4 and earlier) is no longer recognized in sidecars, and has been replaced by “Rating.” If true, this is unfortunate.

Rank has been replaced by Rating indeed, nevertheless, DPL5 understands the term as I found in my tests. All it took is a manual import of the settings.
Use the settings import item from DPL5’s File menu.

Note that .dop sidecars are not backwards compatible. As long as your sidecars are from a previous version of PhotoLab, things should work as expected.

Very useful alert and detailed report. Thanks for sharing @RexBlock and thanks for your additional testing @platypus

ETA 2 - It’s worse than I thought. Files I edited last summer with PL4 are missing their rankings.

This looks like a fairly simple bug. When updating sidecars from earlier versions of PhotoLab, PhotoLab 5 should look in the .dop for ranking and move it forward to rating in .xmp file. There’s no good reason to continue to maintain both ranking and rating going forward (and lots of reasons not to: conflicts, mismatches).

The right place to solve this issue is at import/open of a folder full of old .dop files.

It has been my experience that PL4 files that contain Rank are automatically updated to Rating .

Hi Joanna I am not seeing this behavior. If I open a folder of raw images that were last touched by PL4, then PL5 shows no ranking at all. It does show which ones I chose for print (“Picked” images), suggesting it is not completely blind to the old sidecars.

I have found that if I do as suggested elsewhere by @platypus to use File->Sidecars->Import upon opening a folder, the rankings (er, “Ratings”) do carry forward properly. Fortunately, I can do this on a whole-folder basis, but it means having to do that with several hundred folders dating back to 2015.

I’ve never done it this way before.

Thanks again for all of your replies.