Oops. I was all finished eating an image, and decided to see what a white frame might look like. I went to “frames”, and added a basic one. I was trying to adjust the size of the white border when PL4 crashed.

I have since restarted PL4, but when when I use PhotoLibrary to go to my “Scans” folder, instead of seeing a film strip of my images under the main image, I see large left and right arrows, and a trash can. When I click on “Customize”, I see both docks, and one large image in the middle, but the “film strip” is missing. If I go to the bottom middle of the screen, something appear like an “up” arrow, but it doesn’t do anything.

Should I do anything with the “crash window”? 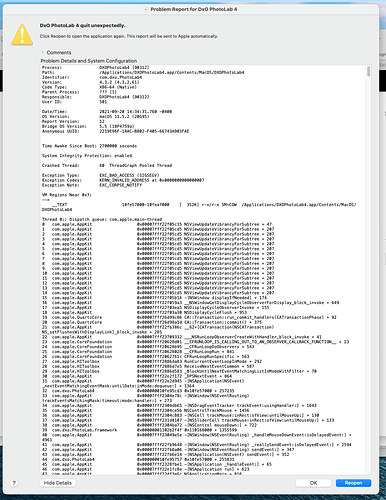 Well, I fixed it by un-docking, then re-docking the image browser, and dragged the funny arrow-thing at the bottom up until things were fixed.

I have no idea how I crashed the program, but presumably I have a file that would tell the right people what happened.