How to use PRIME as best? (image heavy)

Yep! The lower iso values doesn’t benefit from PRIME much. Maybe the iso invariant sensors do.
Then you can underexpose in a lower iso and lift in post which have the same outcome as well exposed in higher iso. And when the post software is better then the camera’s iso valuation the lower lifted version is better.

(I still like to know why 40% is chosen as default in HQ and PRIME. There is a threshold which they visualized with the default setting)

That would be interesting to know, since the default’s been 40 for a long time. I wonder if DxO simply wants the default to be strong enough to show the effect noticeably but not so strong that it wipes out detail. In other words, not necessarily the optimal setting - just a good demonstration setting. Otherwise, some new users who assume that defaults are more automatic or optimal than they really are will also assume that HQ and PRIME don’t do very much. That’s just my speculation, of course, based on limited forum observation and how some other tools (such as Topaz Denoise) behave at default settings. But from your demonstrations, Peter, I’d say that Luminance = 40 can strike a pretty fair balance (subjectively - everyone’s taste varies) and the other defaults for noise reduction sliders are even more easily left alone. Sometimes they can’t be left alone, if there are unwanted color or maze or blotchy artifacts - but these problems can also require adjusting Moire removal, Chromatic aberration removal, lens sharpness, Clearview, microcontrast…

I’ve taken another community member’s advice to set the Luminance default at 12. This has been good for low-ISO micro four thirds images, provided there isn’t a lot of exposure lifting to recover shadow detail. Even properly exposed low-iso images can show noise in shadow areas and blue sky. The question is, how much grain do you want? Luminance=12 tends to retain fine grain. At 40, there tends to be no grain - which some people like but others think looks too artificial, like plastic. However, often enough I see so little difference between 12 and 40 for a given area that I think some “noise” is really just difficulty resolving fine details (like arm hair in shadow or blades of grass). I think PRIME does a good job overall keeping details from blurring. Not always the best, but admirable.

[quote=“Egregius, post:22, topic:11962”]
I’ve taken another community member’s advice to set the Luminance default at 12. This has been good for low-ISO micro four thirds images, provided there isn’t a lot of exposure lifting to recover shadow detail.[/quote] 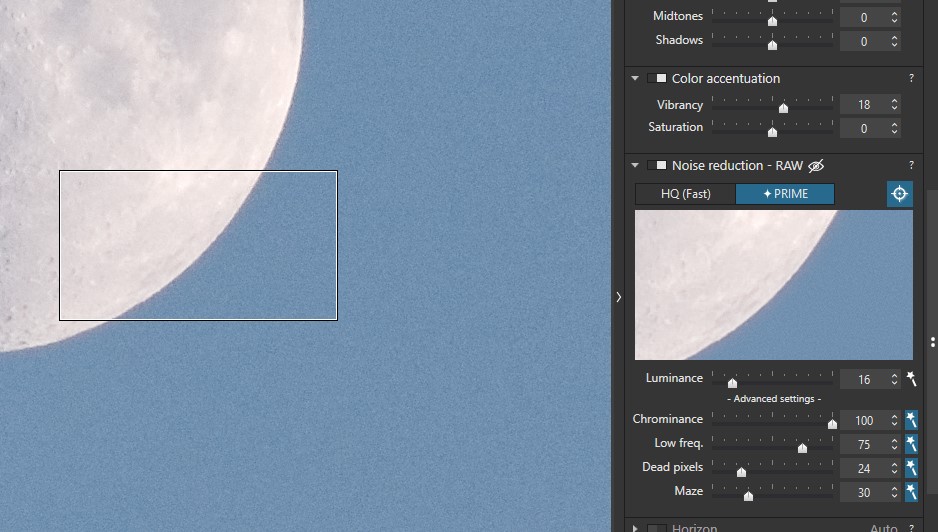 10%20prime%20hq938×532 105 KB
so it much be a sample percentage. creating a moving threshold of which level of signal is called “noise” combined with image scanning algorithm to find the common “signal” which can be called “noise” like dubbing a frequency out of sound to enhance the human voice in loud suroundings.
See waves have a certain flow and frequency of sound turn that down with that flow ritm and the wavesounds are suppressed.

Even properly exposed low-iso images can show noise in shadow areas and blue sky. The question is, how much grain do you want? Luminance=12 tends to retain fine grain.

where grain starts to be converted to artefacs and smutching blotches or the “plastic look” is appearing that’s the place to stop adding denoiselevel.
or for artstistic purposes a filmpack kind of neat equal grain.

So the major question remains: why on hq and prime is 40(%) the deafult?
moon shot proves that HQ 16% is much less effective as 16% PRIME. so why are they the same default level?