How to test PL4 while keeping PL3

I’d like to have a play with PL4 before deciding whether or not to buy it. With that in mind, I’d like to install the trial version without burning my bridges, in case I decide to stick with PL3. What is the best way of doing this?

Download the DPL4 trial and drag the app to your app-folder (or wherever you like).
Then start DPL4, it will read things from DPL3 and create a separate environment.
Important: Set all versions of PL to not save and load sidecars. 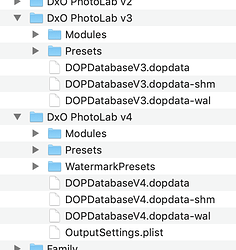 Right. The different major releases of PhotoLab (1, 2, 3, 4) and its predecessor, OpticsPro, are designed to not conflict with each other if installed together on the same computer. Unless, perhaps, one customizes something such as the location of the database such that the different versions are using the same data store. I don’t know what would happen if one were to do that.

not conflict with each other if installed together on the same computer. Unless, perhaps, one customizes something such as the location of the database such that the different versions are using the same data store

Note that I set all my PL apps to NOT store and load sidecars. I’ve been running several versions of PL (set as mentioned) in parallel for many years without hiccups.

Just installing PL 4 will not remove PL 3 from your system and will not make it inaccessible. I currently have both on my systemand have been trial-ing PL4 but still using PL 3 when I feel it necessary.

as already said above V3 and V4 can be installed together. Before working on pictures I would create a special folder with files in it for testing only. The reason is that, in case you work with sidecar files (.dop), the sidecars created by V4 can not be read by V3. The other way round is possible, V4 can read V3 dop files.

That is really good advice. Software is generally backward-compatible (meaning the new software “understands” the previous version, but nor forward-compatible.

Perfect. Thank you all for your helpful observations. I’ve downloaded PL4 and will take a look at it over the coming days.

I am running 3 and 4 in parallel, I have even run both 3 and 4 at the same time on the same machine without issue (for comparison purposes only). I realise that this may not be recommended, but it seems to work fine. At some point I will get around to removing DPL3.

Running two different versions of PL in parallel seems to be a non-issue
as long as you work on separate copies of images or set both PLs to not read and write sidecars.