How to capture/edit an image with both a "night scene", and also something very bright

A couple of days ago we had something called a “Strawberry Moon”, a special occasion when the moon appears larger and brighter, and often takes on a “tan” color. You can watch this video to understand: https://www.youtube.com/watch?v=xLF8lgmwW40

Anyway, I woke up at 2am and spent an hour or so capturing a photo of the moon that I liked. I’ll copy that below later today - it’s on a different computer.

I woke up several hours later, and saw the moon setting over the Miami skyline. I took a series of photos, trying lots of things. Without a graduated neutral density filter, I was stuck - Miami was too dark, and I couldn’t get a city-scape, and when I tried, the moon (lit by sunlight) was blown out completely. Two things started to happen after almost an hour of trying - on the good side, the sun started to come up (behind me) so the view was getting lighter, but the moon was dropping down into a lot of clouds, blocking my view, and eventually vanishing behind the clouds.

I tried editing my bracketed photos using Photomatix, and got horrible, ugly results. I gave up on that. I considered combining two photos, one exposed for the moon, and one for the city, but figured that would be fake. Out of all the images, I found one that started to show the city, but had enough detail in the moon where I could make it look presentable, which also brought out the clouds.

Someone with more skill than I possess could probably make this look better, but this is the best I could do. The ISO was very high, and the photo has horrible grain, but PhotoLab made it look presentable. I replaced the “pipe” in the file name with a “-” character so it ought to open properly in Windows and Mac.

I was wondering what I could have done better, to capture a very bright moon, and a very dark “landscape” below it. The people I sent this final image to like it, but I had hoped the city would look better.

I’m creating a new thread for this, as most photos don’t have such an extreme brightness range.
(The jpg image was created from a non-windows friendly file.) 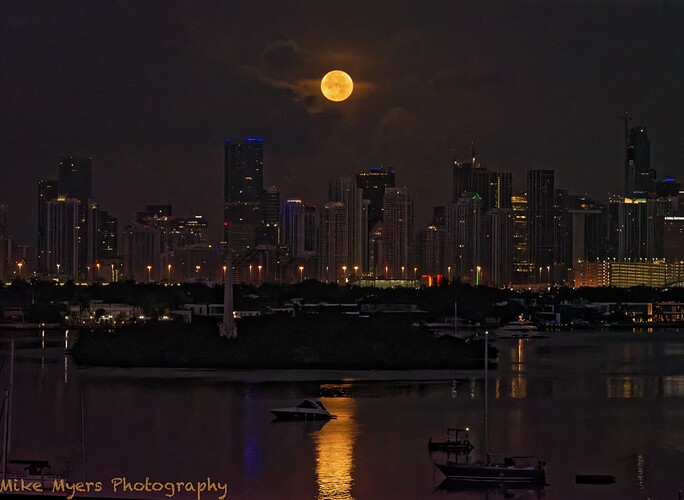 Note - The ‘jpg’ image I posted shows up without the pipe symbol that was in the image I uploaded. No idea how or why this happened. Check the screen capture below, and compare it to the file name displayed above for the ‘jpg’ - the pipe is missing… 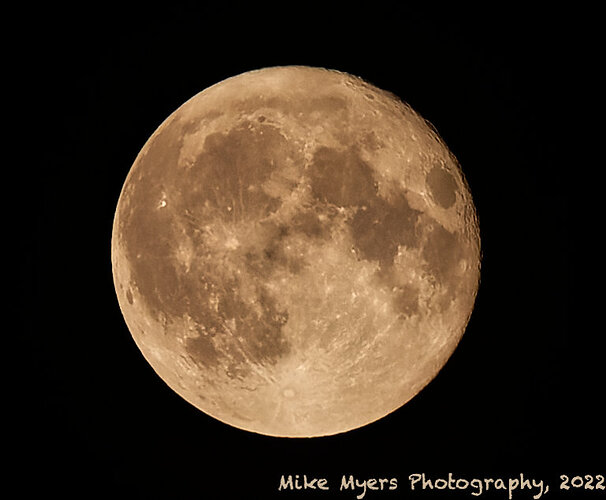 Editing such a photo is covered in your high dynamic range thread.
No need to go through it all again.

As for capturing, @Joanna has written about that a few times too.
Find it somewhere in this post.

“I usually start by putting the camera in manual exposure mode and setting the exposure compensation to a positive value that suits the tonality of the brightest part of the subject: if it is pure white set it to +2, if it is off-white, set it to +1, or somewhere around that.”

Yes, I remember all that, and was able to do it before, but I rarely take photos of things I can’t even see. To my eyes, the city was all “black”, with a few lights here and there.

The best I could do is what I posted here, but I hoped the city could appear more “visible”, something I couldn’t accomplish. Had it gotten just a little lighter, I could have done what I learned in the previous thread, but by then the moon had moved behind the clouds. This was the last photo I was able to take to capture the full moon. I did try, but to me, the best I could do was not enough.

To me, this went beyond “high dynamic range”, and without using the things I was shown in the other thread, I’d never have gotten even this close.

To me, what I wanted to show, is not possible.

I have to say, this isn’t a bad attempt - certainly one of your better ones.

As @platypus says, we’ve covered this subject before but, if I may, I’d like to be “picky”…

You shot this at 12,800 ISO - hence the excessive noise and lack of detail, even in the moon. There really isn’t any need for this kind of ISO.

So, you could have got away with a 1 second exposure at only 200 ISO. This would have given you nearly 14 stops of dynamic range (and a lot less noise) instead of the mere 8.4 stops range that 12,800 ISO gave you.

I couldn’t really do much better due to the high ISO and lack of range. The main things I did differently was to use the Spot Measure mode in Smart Lighting, with a small square around the moon and a larger rectangle over the islands.

I also needed to change the tone curve; and max out the chromatic aberration to counter a slight fringe around part of the moon.

You used a Control Point over the moon, which was a great idea - I just reduced its size and changed a couple of the adjustments. 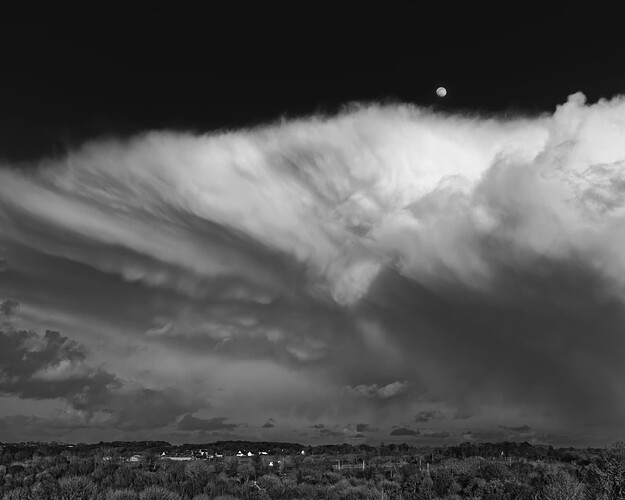 The exposure for that was 1/500 second at ISO 64 to get the maximum possible range, but it was taken whilst it was still daylight.

Here is the DOP after my work - the Master is reset to zero - VC1 is your version and VC2 is mine.

Simply delete the database files from the smart folder that I made for you and replace the DOP - all whilst PL is closed.

You shot this at 12,800 ISO - hence the excessive noise and lack of detail, even in the moon. There really isn’t any need for this kind of ISO.

The second photo, taken around 2am or so, was at ISO 800, f/10, 1/2000th. The camera was on the tripod, but with the 300mm lens I thought the wind was blowing both me and the camera around. Being half awake, I made the shutter so fast to “freeze” the moon. That worked fine, but I wished I had a 600mm lens.

I woke up again hours later, and it was quite “black” outside. With my eyes, I couldn’t make out the city buildings. I guess I screwed up going so high with the ISO. Then I tried to get an exposure that didn’t “blow out” the moon. Like I wrote, the sky just started getting a little lighter, and the buildings were just starting to become visible. If I had ten more minutes, I’d have been able to get a “normal” photo of the city, but I didn’t. I might have realized what you wrote, given another minute or two, but at the time, I wasn’t thinking very clearly. I wasn’t all that upset when the moon vanished behind the clouds, as I could bring the camera back inside and go back to bed.

I captured a similar image four or five years ago, and back then I got a “normal” exposure for the moon, and the city just showed up naturally.

As it was, I realized the ISO was far too high, but I remember thinking that PL5 would fix that with DeepPRIME.

I should add that I wrote the whole thing off as a wasted effort, thinking that at least I got a nice photo of the Strawberry Moon, and was surprised that I could bring up this image as much as I did. I thought it was all wasted effort, and posted it here anyway to see if I was oblivious to some trick that would have improved it. Eventually I’ll get a chance to try something similar again.

Helen’s photo is spectacular, and that’s an understatement. I find it hard to accept that it was taken in daylight. Seeing a black sky with the moon like that, tells me that it must have been late at night. All the details, and shading, in the clouds is “beyond awesome”. Looking at it as large as I can make it, I see the moon has all the “texture” that one might expect. That photo is begging to be printed in a much larger size - once I do that, I can see all the detail in the land.

I will download and follow your advice. Downloading the .dop is easy, but where do I find the smart folder?

Here is the DOP after my work - the Master is reset to zero - VC1 is your version and VC2 is mine.

Your .dop file is now installed.

VC2 (yours) - it’s “cleaner”, less noise, and the moon looks better, but the city is missing all the details I tried to bring out.

To me, VC1 shows what I wanted to capture, but it’s ugly. VC2 shows more of I wanted to show, and is the better photo, but the buildings, and the boats in the water - mostly gone.

Maybe we can split the difference, with VC 1-1/2, showing a little more detail, but still dark?

As people on TV used to say, “Close, but no cigar!”

One more thought - your VC2 is closest to what I think I saw, as the city was just all black, and the only boat I was aware of was the one I the middle. The moon looks better than what I could see with my eyes. If I ge an opportunity to take a similar photo again, I’ll follow your suggestions, and try to wait until the sun has lit up the city just a tiny bit more.

I would give this image a grade of “D”. In simple English, “yuck”.

I split the difference, so the city and water is slightly lighter, the moon is slightly darker, and made the reflection in the water dimmer… I greatly prefer this over my original, and it’s closer to what you did, while still showing more details. 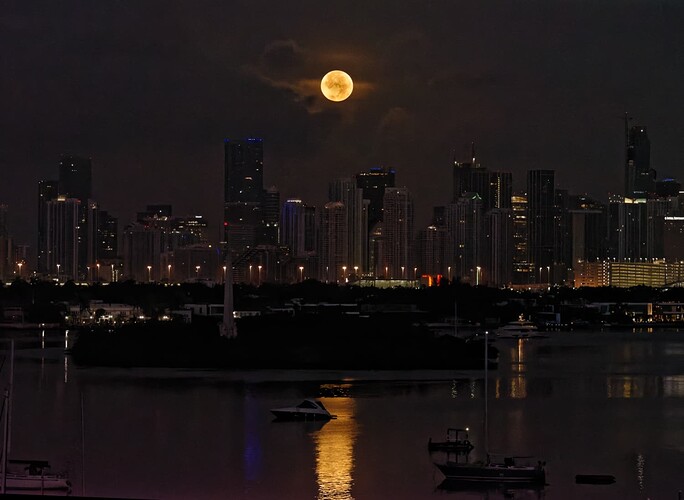 Here’s a collection of Strawberry Moon photos that other people captured: