How many of you uses a big or dualscreen mode and hoe many is working on tablet/laptop?

I would made a poll if i knew how to make this.

I am used to work on a twoscreen setup and like to use the second screen as dump place for floating toolwindows. Some tools of DxO could be improved in use by having a float - mount back to original place command and resizeable window. Or like Local Adjustments a possible move it out of the way, pop a floating window.
This is only usefull for those who are on multiple screens or a very big one where you can set it to the side. The 21-9 screens are a example of one screen acting as dual screen.

So a small poll,
1 multiple screens
2 big (4k) one’s
3 no i am on single screen laptop don’t have room for floating toolwindows.

Do you use it as one big screen or as a big window and some smaller around?
Devided it in three sections?

Do you use it as one big screen or as a big window and some smaller around?
Devided it in three sections?

For PhotoLab I use it full screen.

I have a single 24", 16:10 aspect ratio, monitor. I would love to attach a second monitor so I could float the palettes on to that. The problem is not hardware, it’s domestic

The problem is not hardware, it’s domestic

w.i.f.e.?
That’s why i have two different screens, i buy a new one every new pc. and as with TV’s bigger every time

i am thinking ahead for when i buy a new system, why would i need a 4k? and most are 27" or bigger at 400,- euro or higher. and a non 4k but 1440p (quad HD) is 299,-
i almost need a bigger desk!
I am not in “the business” so the photorealcolor calibrated highend screens arn’t justifiable.

Working with my 23" as main screen it’s crowed with dxopl’s workpalette on the sides and i use my second as a dump place for webpag. andfoldersearching.
Because floatingcommand isn’t returning with docking command on the same spot, annoying, i am seldom use it. i mostly “close” tabs/palettes by hand and hide filmstrip when i need a bigger “view”

The Bigscreen workers, special the 4K one’s are having a much smaller letter/graphics and thus less % of the screen filled with the tools and other pallettes, ergo more room for the actual image. and it’s covering more image on 1:1 (my camera is 16Mp so nearly 4K native)
On the other hand you need a big 32" to read the words without a loupe

So if most are using a FHD twoscreen setup or a bigggg profi screen then DxOstaff can fix the workspace setup with some new tricks:

(curious how many are working with a spread out floating palettes setup. lots have there workingspace personalized
But only a few are using a twoscreen setup.

When I tried to add under Win 10 a second monitor, it was a disaster.
First attempt: a smaller resolution CRT addition scrambled the icons on the main HD monitor.
Second attempt: a same resolution 24" HD monitor also scrambled the icons and stretched the background image to 3840x1080 pixel, looks awful. ( in the WIn XP and 7 it was allowed to designate separate background images to each monitor. In Win 10 it is not supported anymore.)
Third attempt: add a 4k touchscreen monitor in Extended mode. The worst solution. The TeamViwer images shrink on both monitor to 1/4 size, impossible to read the remote PC content, not configurable anymore; till the next Win 10 restart - without 4k monitor connected. The touch screen function on the main screen active only, in spite of the secondary screen has touch screen capability. I GAVE UP.

P.S.: I’ve chosen an LG TV, because its color fidelity is usable for photo editing, meanwhile in the top right corner sometimes I can watch TV in the background. It is simple comfort factor. On the other hand, the TVs having more input connector than only monitors. I have 2 HDMI, one SCART and one VGA for other PC connections.

Sounds as something i need to be keen on when buying a new screen.

If getting multiple screens, I would recommend a multi-screen desktop stand that is VESA compatible.
For example: 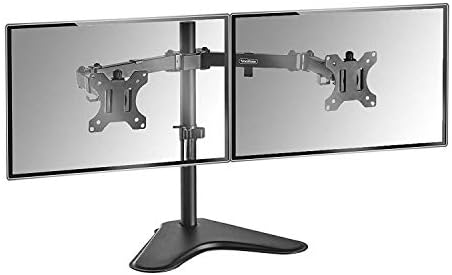 I have a Wacom Cintiq which works create in desktop extend mode. It’s the 16 inch version, I wish I had bought the next size up

I use a Dell M4800 mobile workstation with a 15.6 inch screen. I packed up all my desktop gear last year to make room in our downsized house we bought after retirement.

Dual monitors–NEC for the primary screen and ASUS for secondary.