When in the Horizon tool, each of the two handles on the line are:

These all make it very clear precisely where the point is. The problem I have is in grabbing either of the points.

Each can be grabbed by placing the cursor anywhere inside the outer circle, however the moment I begin moving the mouse after grabbing, the aim point jumps to the precise cursor location. This makes fine adjustment difficult.

The relationship between the actual cursor location and the aim point should remain constant from the beginning of the drag.

The handles of all of DPL’s similar tools are much more complicated than necessary imo. One of my favourite implementations is Capture One’s minimalistic approach: 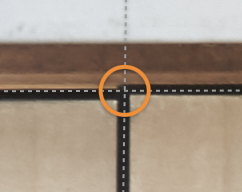 While I don’t see the magnetic action you describe with DPL 5.2 on my iMac, it’s definitely there in Capture One (version 12 screenshot shown above)

Capture One has a few features that I’d really love to get in DPL:

Lightroom enlarges the grab point, but it’s done at too high a magnification (looks like >100%) and I do prefer C1’s way, comparing what’s implemented now.

Hmmm, Capture One changes the cursor for straighten lines to a tiny cross symbol with a huge 270° arrow around. I sense DxO’s crosshair to be more precise. Also, PL shows the straighten line after applying the straightening. C1 does not. @platypus you’re showing the perspective correction marks (at least that’s what I see in C1 22).

You’re describing an interesting behaviour @zkarj : When I use the straightening tool in PL and draw a straightening line, the cursor changes from crosshair to “pan”-hand inside the circles surrounding the crosshair control points while these get an orange highlight colour. There’s no jump involved. Neither with a mouse nor with the trackpad, nor with the tablet.

The behaviour I am describing is 100% reproducible here.

The net effect of this is if you don’t grab very near the centre of the handle, an attempt to move the handle by a pixel or two is thwarted by this initial jump. Hopefully it comes across in this screen recording. Once the hand appears, note that it never moves more than a pixel or two, but the handle it is holding leaps downwards the moment I moved the cursor after grabbing.

I’m sorry, I could only “reproduce” this effect once out of ten times and for that I really had to aim hard to hit exactly that one pixel producing that effect. Is there a special reason you don’t place the cursor inside the circle? And if you need to adjust the horizon by ¼ pixels difference - you could open the horizon tool in a pallet and move the line by 0.01° or try automatic.

If you balance on the edge of a knife or on a thin rope, the outcome might also be a bit jumpy?

I can confirm this is reproducible every time but I do not believe it is a bug, it’s just the expected behaviour for dragging a new line rather than moving a point on an existing one.

Try ignoring the default line and click drag from somewhere on the line that you want to align and keep dragging. You will see the tool change and the original line disappear and then reappear following the cursor as you drag it.

The example in the video was produced at the extreme case to illustrate the problem. Yes, I do generally grab for the middle, but I am not focusing intently on grabbing exactly the right spot — I am using inherent motor skills and hand-eye coordination for what should be a simple task; grab the handle. So no it doesn’t always jump that much and sometimes barely at all. But it happens often enough that I find it annoying.

@Joanna the reason I am moving the existing line is because I have already made a significant rotation and am now trying to perfect that. Dragging a new line is going to be a much bigger cognitive load, especially because the existing line disappears the moment you start a new line. If I were trying to trace a horizon or the side of a tall building, then sure. But often I am gauging by the verticals of a bunch of houses in the background which are simply not big enough to draw an accurate line.

What I really want is a rotation handle like most other applications provide. Drawing a line is great when you have a good reference, but is actually not great when it’s a judgement call on the smaller details “looking right”.

The photo below is the one I used for the video. I cannot trust wooden poles to all be vertical and I know for a fact that the runway beneath the aircraft is on a significant slope! My usual approach with shots like this is to drag the line “by eye” to get it approximate, then turn on the grid and start adjusting, trying to gauge the poles and houses as I go.

If I had a simple rotation handle I would just grab that at the start and hold it until I was happy. I wouldn’t need any lines or grids, nor care about the grab accuracy. But adjusting a one pixel-sized point on the photo should not be subject to the inaccuracy of the radius of the circle. 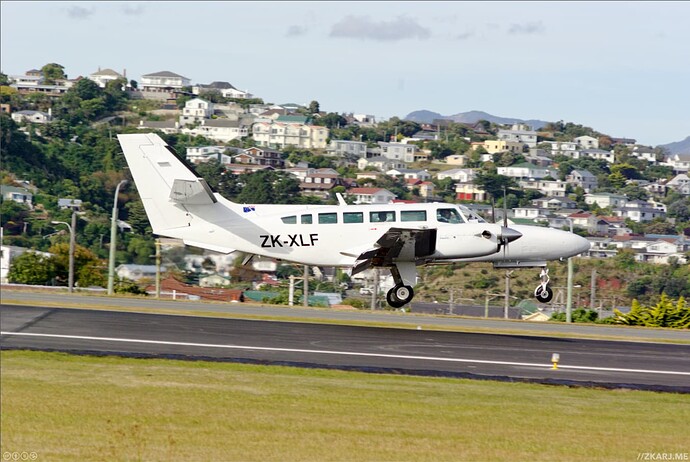 After a bit more thought about this, I’m inclined to say that the behaviour is not a bug, but could certainly do with rethinking.

What is presently happening is that, as soon as a mouse drag is detected, the circle is shifted to place the centre of the circle on the mouse point, as it would when starting a new line.

My personal opinion is that, if the mouse is clicked and a drag started from within the circle, the mouse position should be offset by the distance from the centre of the circle and drag coordinates calculated from there so as not to make the circle jump.

Dragging the mouse outside of the circle should continue to behave as it does by initiating a complete redraw of the line from the clicked point.

@StevenL does this make any sense?

… while in Win10 there is no mouse jump

and the hand tool doesn’t change to ‘cramped’

Not denying your problem, as you can see from my previous post, but just tried your image using the grid with a spacing of 50px and using the tool in the sidebar. I found it much easier to gauge because of all the squares and all the houses being a similar size. 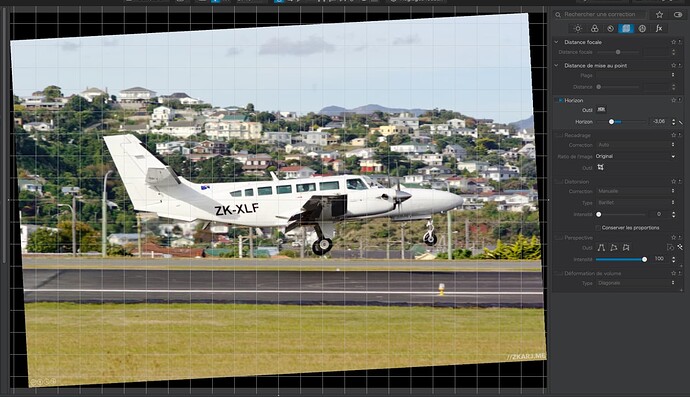 For me, it’s typically an image that I straighten in seconds with a vertical line (based on the buildings in the background) 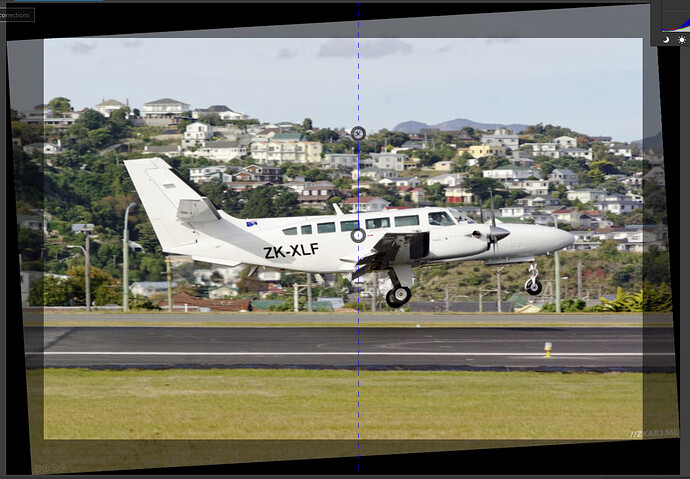 Bug or “issue” is up for debate. But I would definitely use the word “undesirable”. Those points are precision markers, so moving them should be able to be done with precision.

@gerarto that is an idea I hadn’t thought of, though it does still require an attempt to “find the vertical” (or horizontal) in the first place, based on often indistinct cues. Ultimately, the final result is “what looks right” and that often, in my experience, requires small adjustments.

I also had not really considered dragging the slider, which does have just enough sensitivity to be useful.

I think the best solution is what most other software does, by providing a rotation handle in the crop tool. That would probably mean a mode switch to use the line drawing approach. The biggest benefit of this approach, more than the basic obviousness, is that with a little free space to the side (such as over the sidebar) you can move your mouse further away from the centre to get finer control.

But as of today… precision dragging should be just that. The handle should retain the same relative position to the mouse cursor throughout.

I should also note that some photos have houses and other buildings further away, therefore smaller and more indistinct, often motion blurred, and in some cases the buildings have curved rooflines and such, all of which makes “seeing the vertical” difficult. It’s a judgement call over the whole photograph when it “looks right.”

For precision adjustment of horizontals or verticals, I use the slider in the horizon palette. Quick and easy, and very precise indeed. Comparing the visual elements with the superimposed grid is all I usually need.

Yes, that has been suggested before and again on this thread, so I finally gave it a go, and it does work well. I’m just not used to having to scroll the sidebar to find it, though clicking on the Geometry selector makes that easier.