Help for developing an old JPEG

Hello,
a friend of mine asked me to improve an old Jpeg he made in the USA 1989. It’s poor quality and I made some test’s, but the result isn’t so good.
Does anybody have an idea to improve the quality, or to make a better Jpeg out of the original one.
Ideas welcome
best regards
Guenter 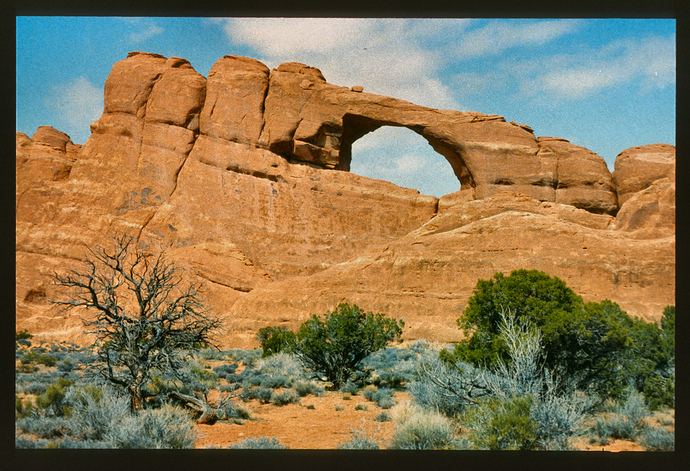 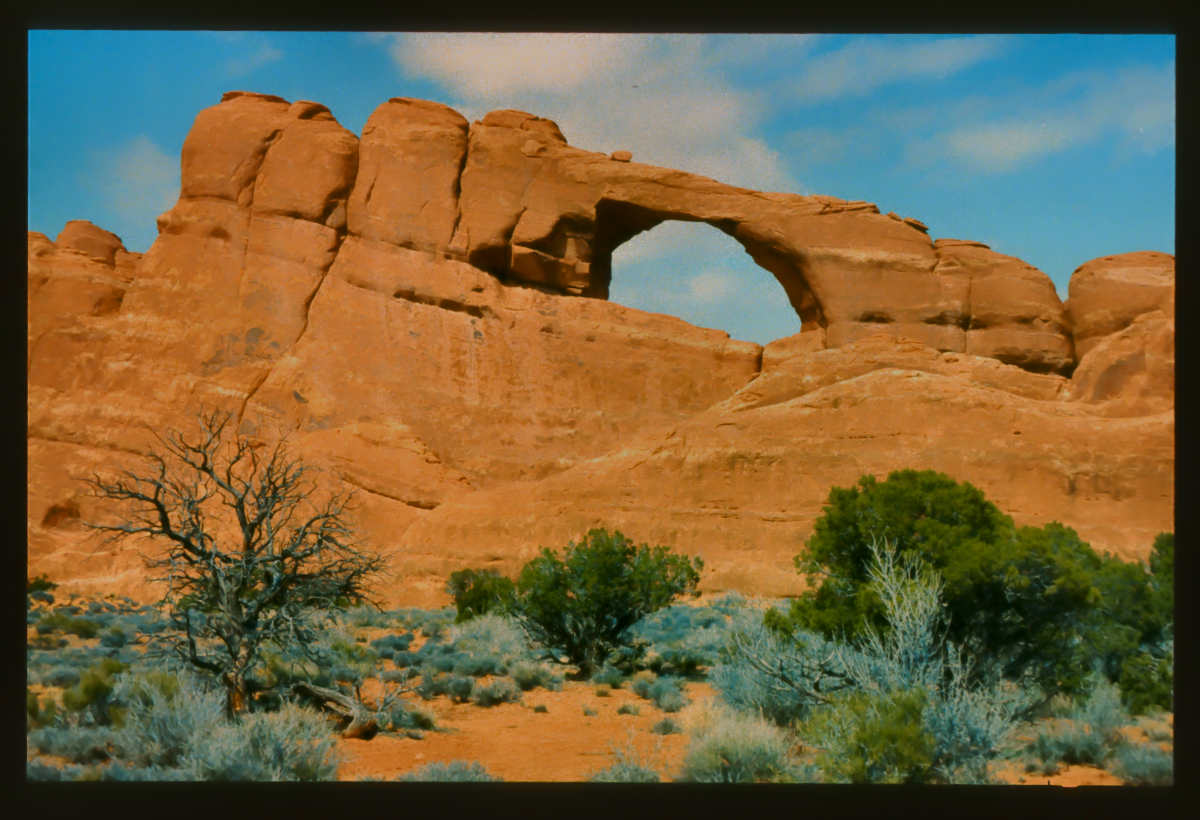 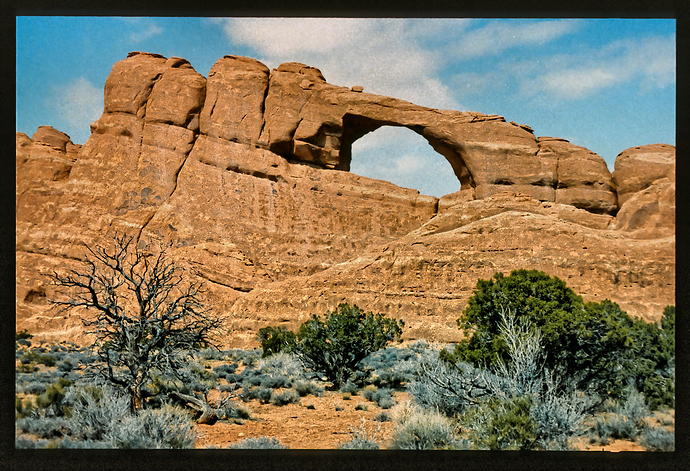 thanks for working on that old stuff

.
You got a nice result for the structure of the arches and the plants. Would you please betray me the secrets of your workflow?
My first result lost a lot of structure, but the heaven is more unnoisy.
Do you have a special receipt for such photos, or is it the long experience of working with DXO.

I am guessing this is a scan of a transparency, given the dust spots visible in the sky.

I used a couple of local adjustments to increase micro-contrast for the foreground rocks and trees, then another one with blur to soften the noise in the sky. I also used the repair tool to get rid of a couple of dust spots.

Here is my take on it along with the .dop file. It’s a little different than Joanna’s. I altered the sky a bit and used a touch of local blur and reduced sharpening and micro contrast to additionally soften some of the roughness in it. Then I lightened the foreground a bit and added micro-contrast to it. Micro-contrast is one of my favorite tools in PhotoLab. It can soften and smooth when lowered and it can sharpen and bring out details when it is raised… 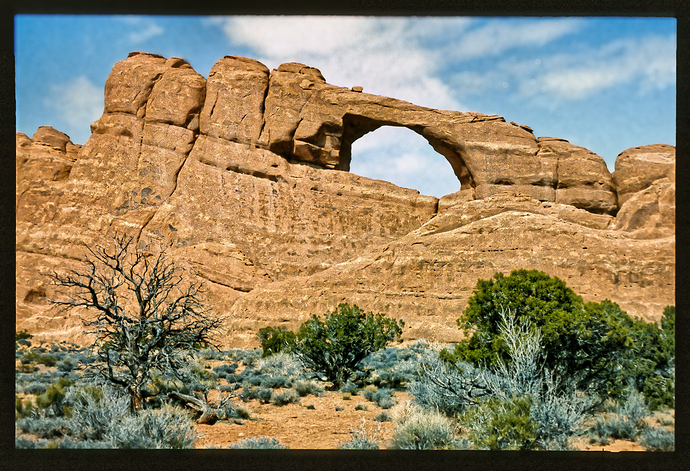 I will check the settings tomorrow. Thanks a lot for the moment, and stay healthy and optimistic within these strange times.

The point is that with a little experience you can do a lot to fix an older photograph.

I thought maybe this photo would look great in B&W. 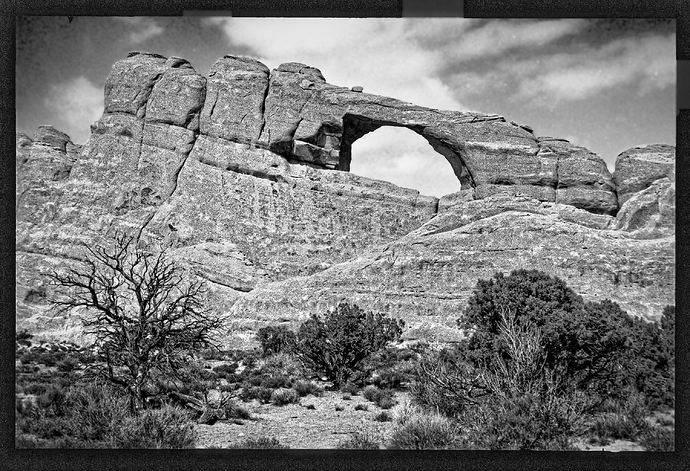 Hi Mark (rrblint),
the b&w implementation looks great and i will ask my friend what he is thinking.

So Joanna, Mark and Mark many thinks for work on this, and the ideas. I will spent some time for a handfull photos of the Arches, Zion and Bryce Canyon are important for my friend.

Have a good time

P.S One of the pictures I’ve got from my friend I like very well

P.S One of the pictures I’ve got from my friend I like very well

Interesting shot. I like it. The rock has a nice glow.
Mark

Yes, he told me that the location was the sunset point in Bryce canyon, but he made the shot at sunrise Point, at time between 5:00 to 6:00 am, and he was alone with 2 other people at this location.

Then take the raw file into DxO PhotoLab, of course.

Topaz can call it whatever they want, and the results may be very good, but it’s not the same as the original raw file unless they can magically recover all the original shooting data that was deleted when the jpeg was created. And it is certainly not clear that PhotoLab would recognize and be able to open the resulting file.

And it is certainly not clear that PhotoLab would recognize and be able to open the resulting file.

It doesn’t recognize the DNG file, but the program will generate either a DNG file or a TIFF file which of couse PL3 will open. I was fascinated and downloaded the trial version. I have a bunch of film-scan-to-JPEG files that I would like the ability to edit in PL3 into really nice photographs. So far I’ve tried it on a few files and yes I really can see a genuine improvement in both the DNG and TIFF files.

Supposedly it converts 8-bit JPEGS into 16-bit DNGs or TIFFS and converts sRGB color space into Prophoto color space. I don’t know if this is true or how effective it would be if it is, but I can definitely see a sharper and more colorful image in the converted file.

Does it REALLY covert JPEG into RAW? In my oppinion: NO. The DNG file that it produces is a linear DNG similar to the DNG file produced by PL3 which is more like a TIFF and not really RAW.
It does however produce a very nice file(big improvement over the original JPEG) that is a joy to work with in PL3 as opposed to the original.

The regular price is about $100USD. Am I going to buy it? Probably not, but I am going to see how many of my old files that I can convert in the next 30 days.