Hi,
I’m not sure if I’m asking for a new feature, or asking how to do a feature that already exists…

Basically, I’ve got a picture with a grey card in it. I want to process this and save the settings to use in similar pictures.

I can set the white balance from the card - that’s easy. What I can’t do is set the exposure. I might be able to if the card was in the centre of the shot (it isn’t) by using the centre weighted average exposure setting.

It too much of a faff to adjust the exposure slightly and check the individual RGB values and repeat.

Is there a simple way I’ve missed or would that be a new feature?

Is there a simple way I’ve missed or would that be a new feature?

Also be aware that, depending on colour space and other things, middle grey might not be what you’d expect: https://xritephoto.com/ph_product_overview.aspx?ID=820&Action=support&SupportID=5159

grey card is for white balance, not exposure/brightness.
you can adjust your white balance from that grey card and write on paper the value it gives you, then add those number to your next images from the same shoot.

Thanks guys.
Wikipedia suggests grey cards can be used for exposure…

A gray card is a middle gray reference, typically used together with a reflective light meter, as a way to produce consistent image exposure and/or color in film and photography. A gray card is a flat object of a neutral gray color that derives from a flat reflectance spectrum. A typical example is the Kodak R-27 set, which contains two 8x10" cards and one 4x5" card which have 18% reflectance across the visible spectrum, and a white reverse side which has 90% reflectance. Note that flat spectra...

Wikipedia suggests grey cards can be used for exposure

grey cards used to be used for exposure a few years back when cameras shot on exchangeable sensors (film).

Digital sensors have different characteristics than films and you’re possibly better served when you expose to the right (ETTR) or follow your camera’s exposure proposals. If your middle grey must be close to what your grey card is, then you can use it as a reference for exposure too, specially when you don’t use raw…

What you do when using a grey card or something else to get a right exposure setting in M is trying to get the same results as an incident light meter. There fore the position of that grey card in relation to the light source and camera becomes important. And have that card filling the frame as much as possible. And use spot metering if possible.

This is what Kodak has to say: 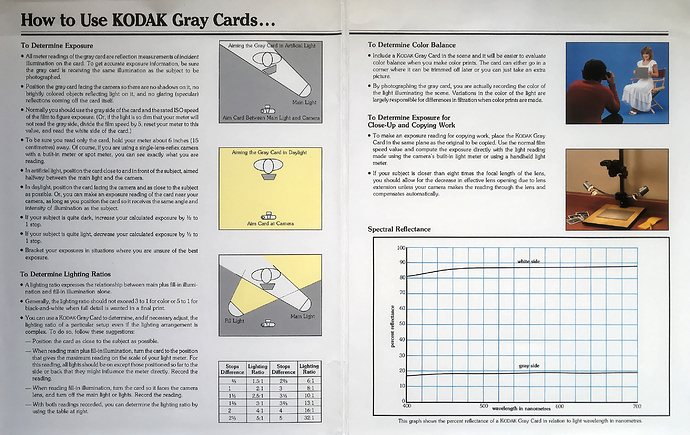 Perhaps the misunderstanding is in the original post: A grey card is used to set the exposure before taking the picture, not in post processing.

White balance nowadays can be changed easily when shooting RAW. A neutral grey or white card can support this.

You’re right, a grey card should be used at the time of exposure, but it feels like it shouldn’t be too difficult to use it to fine tune the exposure on the computer…