Getting PL4 to "forget" a folder

I am trying out the search capabilities in PL4. I searched for a folder with the word “birds”, and got back two results - one is the original name of that folder, and the other a new name that I gave it after doing some edits (I changed the name from “Birds” to “Birds in our Back Yard”).

The problem is that all of the photos are listed as in both of those “folders” - the actual one with the new name, and the “zombie” one with the old name, which no longer exists. The files are shown in the zombie folder as missing, which I guess they are, since the folder no longer exists.

I hope this makes sense. Bottom line is, I changed the name of the folder, but I can’t get PL4 to forget it.

What OS are you running (Windows or MAC) what build or version?
What build of PL4? (hint, use Help menu > About)

That said, the Search feature looks for indexed criteria.

It seems you might be referring to “Recent Searches”, but this is not clear. Also, did you rename the folder outside of PL or by using the rename feature from the context menu in the folder list? 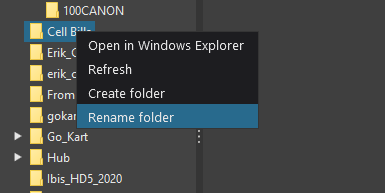 About the Database reindexation DxO PhotoLab

Hello @Pieloe. To answer your question, here is the PL strategy for images discovery: When you index a folder, it’s exactly like when you browse this folder and all the subfolders manually. When PL finds an image that was not in the DB, it creates exif/xmp metadata in the database When PL finds an image that was already in the DB at this location, it updates exif/xmp metadata in the database (if required). When PL is expecting an image in a specific location but this image is not here anymor…

it should be enough to go to the location where the original folder used to be (parent folder) and re-index from there, see the link posted by @shadowsports. Look for “Indexing folder contents”

In the MacOS version you can’t rename the folder from within PhotoLab, which makes it much more likely to get this problem.

The original search was simply for “bird”. That located 2 folders: The current one, as well as the current one with its old name. There is only one folder, but PL seems to think that there are two - one with the old name and one with the new name. It also thinks that the same images are in both folders.

If I click on the search under Recent Searches, or if I do a whole new search, I get the same incorrect result.

If I try to remove a file from the zombie folder, I get an error telling me it can’t be removed (which makes sense since the folder does not exist anymore, at least not by its old name).

I must have renamed the folder from the Finder, as I cannot find a way to do so using the Mac version of PhotoLab.

The response after yours says that if PL does not find an image in a location where it was expecting one, it removes info about that image from the database. Makes sense. But it does not say what happens when a folder is no longer there.

I am currently re-indexing everything. I tried reindexing from the parent where the folder used to be, and it didn’t help. Though it’s possible I made a mistake doing that.

I re-indexed to no avail. I then did the following steps, which I am going to send to DxO as a bug report:

2 Copy a couple of image files into “Test”

My expectation was that this should fix it.

Did this fix it? I have the same issue with PL5