I will start a new fresh database from scratch with PL6. No import, everything from scratch inside photolab.
So I will use about every existing metadatas and keywords for indexing. I will use extensively projects too, now we have a way to organize them.

I have 2 main questions :

Thanks for your responses.

PLEASE, THIS IS A THREAD ABOUT HOW TO USE PHOTOLAB, SO DON’T EXPLAIN HOW TO USE OTHER DATABASE SOFTWARES INSTEAD OF PHOTOLAB HERE.

1 - COMPATIBILITY :
What to do and what not to do, to get this database as compatible as possible with other softwares. Are there some incompatibility issues ? what are they if any ?

Three question, one answer: PhotoLab 6’s database is only compatible to PhotoLab 6.

@JoPoV one of the most important things is whether you are running DxPL(Win) or DxPL(Mac) as my post identifier shows I am running a Win 10 system and any tests I carry our will be pertinent to that platform and may or may not be relevant to the Mac!?

The database is SQLite (like most of the other such software that uses a database) and as @platypus has stated relevant only to DxPL.

2 - EXTERNAL DRIVES :
I work with several external and removable drives for photography, and not all are plugged at the same time on my worstation.

This may or may not cause issues please see This image cannot be processed since the source file could not be found ( After I cloned the Drive ) for a “similar” situation were some “cracks” were found! I will investigate those posts again to remind myself of the exact nature of that particular problem.

a) Will photolab keep trace of every data when plugging, unplugging, changing extrenal photo drive ?

I think that it does but that may actually work against you just depending on the workflow that you want to employ?!

b) I would prefer to put each cache and database folder on each relevant drive. Is there a problem with this (except the need to configure photolab config file pathes everytime external photo drive is changed) ?

There have been requests in other posts on the forum asking for a similar feature! My concern is that it potentially adds even more issues with drives coming and going because now there is a DxPL database doing the same!

c) What if I need to move (or copy) some images from one drive to one other (when both are plugged) ? is there a way to copy metadatas and projects datas too ? ( is copying .dop and .xmp files with raw enough ?)

I actually believe that DxPL can handle even the same (named) files, in the same (named) directories on two different drives connected at the same machine connection with the same drive letter! But as @platypus has stated there are potential issues and the DOP and any Xmp sidecar file are all that is at your disposal!?

‘Projects’ cannot be dumped out and read back in so they will remain in the database in which they were created!?

So I decided to try an experiment as follows

i.e. 2 pairs of ‘Projects’ (4 in total) specifically with only files from one or other of the two drives and 2 projects which contained mixtures from both drives!

The database ‘Items’ structure with all 10 files having been discovered:-

The 6 ‘Projects’ to be used when a device or devices are absent and are re-discovered to see how DxPL handles such a situation:-

By using ‘Projects’ it is possible to check if DxPL is handling the “original” database entries for the directories or rediscovering them anew!? 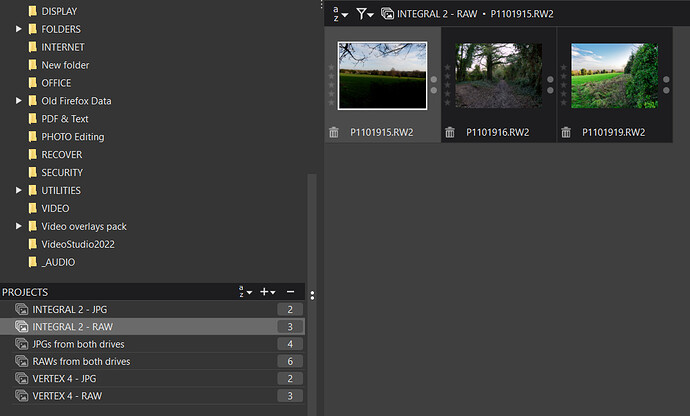 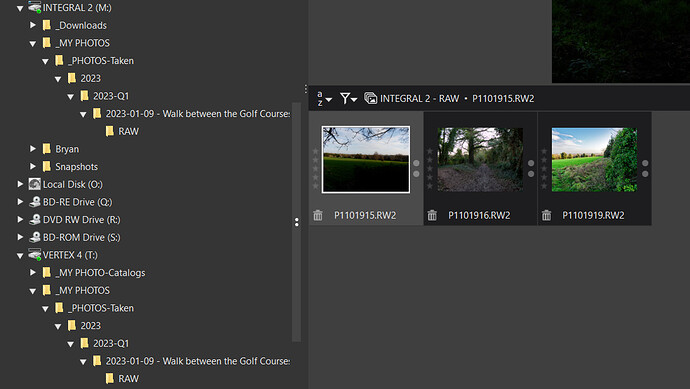 What happens when a drive is “missing”:- 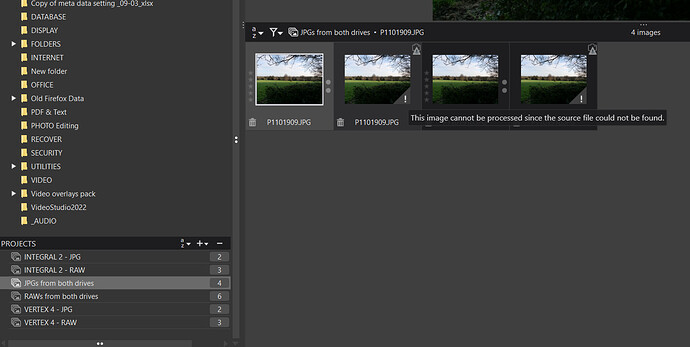 There are warnings but nothing particularly dramatic, at least not during my testing!

The database after the drives have been disconnected, re-attached with different convertors and “forced” to have different drive letters!!:-

To stress DxPL “a little” I changed to older convertors and forced the attachments to be assigned different drive designators and everything worked as it should, I am glad to say!

This test was with a database not co-located with any images because the images were mounted on removable devices. If you start co-locating with the data (not really a problem) but using removable drives then there will always be issues when the database you were using is not to be found because the drive is not attached.

At that point DxPL will create a new database and place it in the default location and you will then need to switch to the database on the drive which is actually attached!

With respect to copy/moving files between the drives then the danger has been covered many times in the forum under the banner of “Unwanted Virtual Copies”. This can occur when the following situation is encountered

It is for this reason that I deliberately set out to make the structures on both the test SSDs identical so that I could test to make sure DxPL(Win) did not get confused and start creating unwanted VCs.

Before I try testing any further, i.e. adding the databases to each SSD I would like more than a set of “wishes” that seek to allow you to make decisions about you work flow later, I guess that you may want to move the drives between systems?

So please try to target my testing to what you believe is the most likely workflow that you want to adopt so that I can try to replicate that as closely as possible, if I feel up to testing any further! The testing takes a little time but the write ups take a lot longer (and the re-tests when something unexpected goes wrong!).

So I continued with my tests as follows;

10, Transferring VERTEX 4 back to the Main machine we have the following

So @JoPoV you can certainly do much of what you “requested” on Win 10!

Currently I have not tested keeping the ‘Cache’ on the same drive and need a potential workflow to fully determine what is and what is not possible using this scheme with respect to moving images between the two drives, i.e. between INTEGRAL 2 and VERTEX 4 in my test case!!

Please remember that opening DxPL on a machine where the last drive used is no longer present, i.e. a removable drive, will result in DxPL automatically creating a new database at the default location!