Joanna, what is the enhanced part of the HSL tool that is only available if FilmPack is installed? 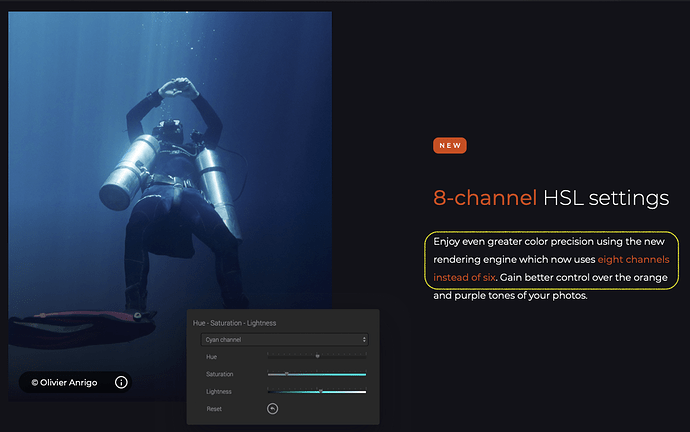 I think there are only 6 color channels displayed without FP6 activated.

I just found a PhotoLab Color Wheel training video from 2020 and there were 8 channels present in the HSL tool, Additionally, the tool displayed in the image above are sliders, not the color wheel. I think that new feature is part of the standalone version.

In general, I lean more to the Kodak emulsions, purely for taste. Recently, I have been using Kodak Elite Color 200, which produces heavy contrast by darkening shadows, which I offset by bumping up the black slider and often the Midtones slider also. I leave the shadows slider alone usually because just a few added points demolishes contrast. Obviously, it varies by image but that is working for me right now. Kodak Portra and Ektar are also good. I also like Tri Ex for some B&W but there are many great options there. The most recent release added Fuji simulations under Digital Films but the only one I really like is Fuji Classic Negative. I am not sure which film stock that emulates.

I’m sure that you are probably right. I’ve never seen the color wheel without having Filmpack activated, so I wasn’t sure.

I don’t have the standalone installed so I can’t check it.

The standalone definitely has 8 channels. I don’t have FP5 installed any more so I can’t check to see if it just had 6. I do remember some (not much) discussion about FP6 having added channels so something got increased.

The “old” Channel Mixer has 6 colours and is meant for tweaking B&W tonality.

The newer HSL tool is much more effective and flexible and it has totally replaced the Channel Mixer tool in all that I do in DPL. Still, it is rough compared to FilmPack’s film emulation presets. Checking all of them out can be a drag indeed.

Checking all of them out can be a drag indeed.

Isn’t it better to learn how to use the tools in DxO to get the effect you want?

I have never had Film Pack and can confirm that the Enhanced HSL tool is exactly as shown in Joanna’s screenshot. The PL5 Manual also shows it like this.

The most recent release added Fuji simulations under Digital Films but the only one I really like is Fuji Classic Negative. I am not sure which film stock that emulates.